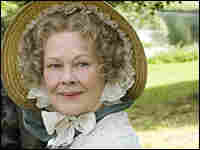 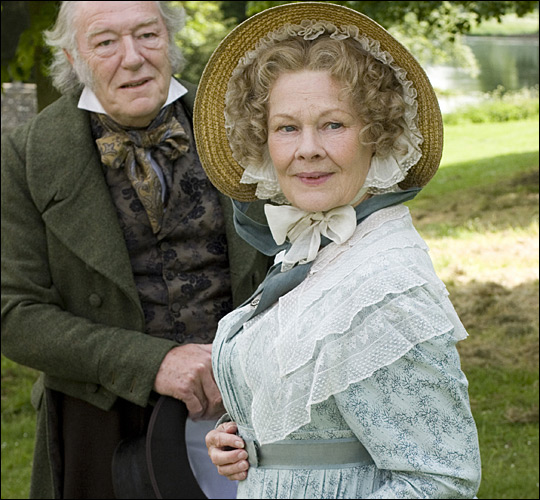 Miss Matty Jenkins encounters a man she once loved, played by Michael Gambon, though men in Cranford are a rarity. 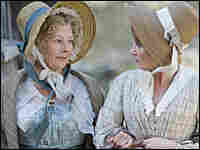 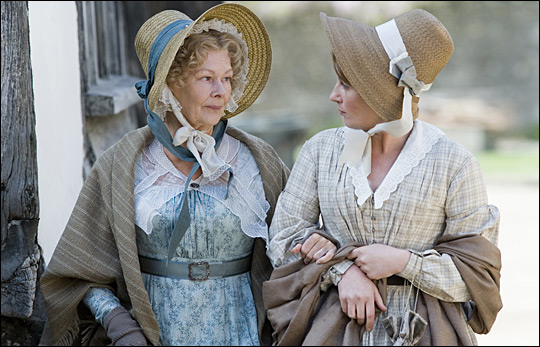 Miss Mary Smith (Lisa Dillon) is a close friend to Miss Matty Jenkyns (Dench), who finds trouble when her bank holdings are lost.

Judi Dench's stage performances have spanned works from Shakespeare to Sondheim, but American audiences probably know her best for her movie roles.

Since 1995, she's played 007's boss in the James Bond franchise; she earned critical acclaim and multiple award nominations for her portrayal as a frighteningly manipulative school teacher in Notes from a Scandal. And famously she won an Oscar for her performance as Elizabeth I — who's on screen for a mere eight minutes — in Shakespeare in Love.

On Sunday, May 4, American audiences will be able to see her on the small screen, in the new Masterpiece series Cranford.

The series is set in an English village in the 1840s, just before the Industrial Revolution, and is based on a novel by Elizabeth Gaskell. Dench plays Miss Matty Jenkyns, an elderly spinster who lives with her domineering older sister, played by Eileen Atkins.

Cranford has been described as a mix of Jane Austen and Charles Dickens. Dench agrees, except that unlike those writers, Gaskell writes plots full of unpredictable turns.

And despite the orderly appearance of the gossipy, close-knit village, Cranford and its inhabitants are grappling with threats to tradition and the social order.

Dench says part of the story's appeal is that "We have lost that feeling of a community all being together, and of course, irritatingly, wanting to know what everyone else's business is."

Dench plays a very different kind of character in the Bond movies. She's M, the steely director of Britain's intelligence service. It's a part she's played in the last six Bond films, and she says it's great fun — especially when she gets to deliver withering put-downs to the world's most famous secret agent.

She's also played the voice of Miss Lily, the Russian dance instructor in Angelina Ballerina, although she says her Russian accent was a bit dubious.

Now 72, Dench has hardly seen her career lose steam over the years. In addition to filming more episodes of Cranford, Dench's next project is the film Nine, with director Rob Marshall. It's based on the Broadway-musical adaptation of Federico Fellini's 1963 film 8 1/2.

Despite her success, she admits that she approaches each new role with great trepidation.

"Oh, I live in fear, leaping from fear to fear, because ... everything I've ever done throws up some difficulty." 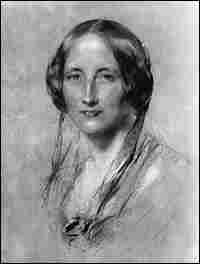 In the first place, Cranford is in possession of the Amazons; all the holders of houses above a certain rent are women. If a married couple come to settle in the town, somehow the gentleman disappears; he is either fairly frightened to death by being the only man in the Cranford evening parties, or he is accounted for by being with his regiment, his ship, or closely engaged in business all the week in the great neighbouring commercial town of Drumble, distant only twenty miles on a railroad. In short, whatever does become of the gentlemen, they are not at Cranford. What could they do if they were there? The surgeon has his round of thirty miles, and sleeps at Cranford; but every man cannot be a surgeon. For keeping the trim gardens full of choice flowers without a weed to speck them; for frightening away little boys who look wistfully at the said flowers through the railings; for rushing out at the geese that occasionally venture in to the gardens if the gates are left open; for deciding all questions of literature and politics without troubling themselves with unnecessary reasons or arguments; for obtaining clear and correct knowledge of everybody's affairs in the parish; for keeping their neat maid-servants in admirable order; for kindness (somewhat dictatorial) to the poor, and real tender good offices to each other whenever they are in distress, the ladies of Cranford are quite sufficient. "A man," as one of them observed to me once, "is SO in the way in the house!" Although the ladies of Cranford know all each other's proceedings, they are exceedingly indifferent to each other's opinions. Indeed, as each has her own individuality, not to say eccentricity, pretty strongly developed, nothing is so easy as verbal retaliation; but, somehow, good-will reigns among them to a considerable degree.

The Cranford ladies have only an occasional little quarrel, spirited out in a few peppery words and angry jerks of the head; just enough to prevent the even tenor of their lives from becoming too flat. Their dress is very independent of fashion; as they observe, "What does it signify how we dress here at Cranford, where everybody knows us?" And if they go from home, their reason is equally cogent, "What does it signify how we dress here, where nobody knows us?" The materials of their clothes are, in general, good and plain, and most of them are nearly as scrupulous as Miss Tyler, of cleanly memory; but I will answer for it, the last gigot, the last tight and scanty petticoat in wear in England, was seen in Cranford - and seen without a smile.

I can testify to a magnificent family red silk umbrella, under which a gentle little spinster, left alone of many brothers and sisters, used to patter to church on rainy days. Have you any red silk umbrellas in London? We had a tradition of the first that had ever been seen in Cranford; and the little boys mobbed it, and called it "a stick in petticoats." It might have been the very red silk one I have described, held by a strong father over a troop of little ones; the poor little lady - the survivor of all - could scarcely carry it.

Then there were rules and regulations for visiting and calls; and they were announced to any young people who might be staying in the town, with all the solemnity with which the old Manx laws were read once a year on the Tinwald Mount.

"Our friends have sent to inquire how you are after your journey to-night, my dear" (fifteen miles in a gentleman's carriage); "they will give you some rest to-morrow, but the next day, I have no doubt, they will call; so be at liberty after twelve - from twelve to three are our calling hours."