Accessibility links
Amy Tan Reveals Stories of Dong Folk Songs In the Southwest China village of Dimen, song takes the place of the written word. American author Amy Tan talks about how the cicada-imitating Dong voices use song to tell stories of nature and the changing of seasons. However, Dimen's rich oral history may soon be lost. 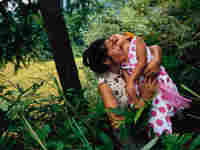 A young girl laughs with her mother beside her coffin tree. In the Dong tradition, the tree chosen at her birth will be cut down and carved into her coffin when she reaches old age. Lynn Johnson/National Geographic hide caption 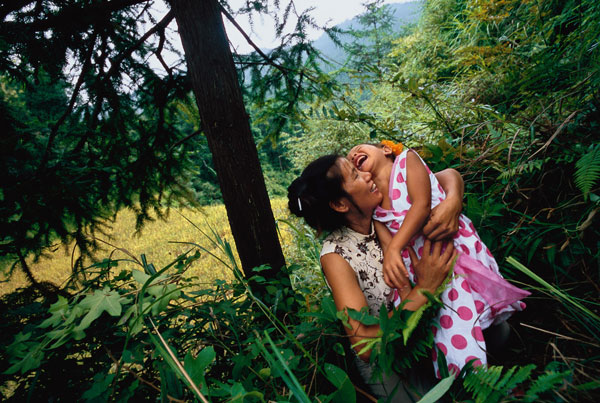 A young girl laughs with her mother beside her coffin tree. In the Dong tradition, the tree chosen at her birth will be cut down and carved into her coffin when she reaches old age.

Gate-Barring Song: 'We Close the Village for Rituals'

Photographer Lynn Johnson Reveals the Culture of the Dong People 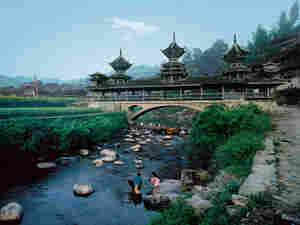 The flower bridge across Dimen's river offers shelter from wind and rain, and a place to sit and contemplate the scenery. Lynn Johnson/National Geographic hide caption 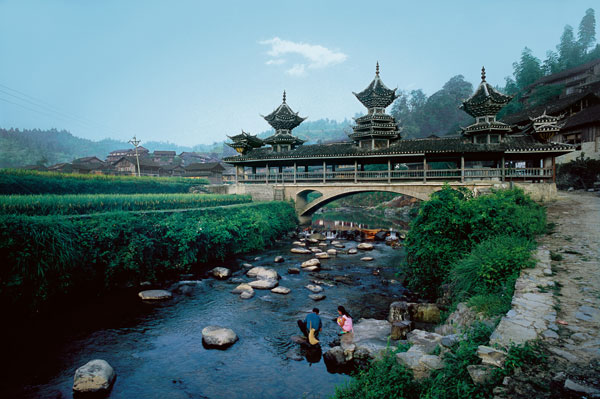 The flower bridge across Dimen's river offers shelter from wind and rain, and a place to sit and contemplate the scenery.

In the Southwest China village of Dimen, song takes the place of the written word. People in Dimen learn to read and write in the official national language — Mandarin Chinese — but they speak in their own tongue: the language of the Dong people.

Their voices imitate cicadas in the fields above the village. Dimen is isolated, but like most places in modern China, it's learning the greater world is not so far away. With the recently released collection, Dong Folk Songs: People and Nature in Harmony, people everywhere can now hear this unique song style.

American author Amy Tan has been a repeated visitor to Dimen. She wrote about her experience in National Geographic Magazine — the May 2008 issue is devoted solely to the country of China.

Before All Things Considered staff members left for Chengdu for a China series, Tan sat down with Robert Siegel to recall the first time she set foot in Dimen.

"Entering into the village I had little girls singing those songs — those dong songs, the welcoming songs — one at each elbow," Tan says. "However, the singing isn't just to welcome tourists, it's how the culture communicates with each other."

While these "gate-barring songs" are reserved mainly for tourists and official guests, the Dong song-style is a form of communication every child learns from the age of 5. "And they sing on key, on rhythm, perfectly a capella, in tune with one another," Tan says.

Young children not only sing to greet but also talk about community and the changing of seasons. The song "Spring Is Here, Swallows Fly" talks about the shortness of childhood, using birds as a metaphor:

After winter we get spring / Swallows fly amidst green leaves / Cicadas sing on top of berry trees / High and low sounds fill the mountains / Cicadas' songs are so beautiful, let's stop and listen / You can hear the mountains and forests resounding / Even the birds would stop and listen / There is music, there is love / All four seasons are filled with happiness / We are happy in our hearts

Across the Dong culture, most of the songs celebrate the natural world.

"Many of the songs are about nature, listening to nature," Tan says. "There's a lot about being out in the field working and realizing that even though your life is very hard and you're working constantly and it never stops, no matter what the season or the weather, there is this beauty."

But Dimen's rich oral history is at risk. Only one woman can sing the hours-long story that recounts the entire story of the Dimen people and the younger generation doesn't seem interested in learning it.

"There was a couple, two couples, on a bridge — Lover's Lane — smooching," Tan says. "And I asked them what they like to sing. 'Karaoke.' I asked them about their other songs. Yes, they do sing the Cicada songs, they love those songs. How about the song about the history of their village? 'That song is boring.' 'Would you ever learn it?' 'No, I don't think so.'

"So it was a very sad feeling, as I listened to this woman sing this song over dinner, that she would probably be the last person to know this song."

Read the "All Things Considered" Chengdu Diary from China