Accessibility links
Simple Gifts: The Shaker Way to Cook and Eat The Shakers — a religious group that splintered from an English Quaker community in the 18th century — did sustainable way before sustainable was cool. They left behind recipes for simple, wholesome food prepared with exactness and imagination.

Simple Gifts: The Shaker Way to Cook and Eat

Simple Gifts: The Shaker Way to Cook and Eat 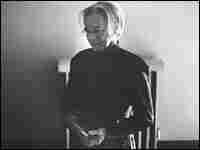 The Shakers splintered from an English Quaker community in 1747. During the 19th century and into the 20th, in communal agrarian villages across the U.S. Northeast and Midwest, the Shakers prepared nearly all of their own food, abhorred waste and were thrifty with resources. This Shaker woman, from Sabbathday Lake, Maine, is pictured in the 1960s. John Loengard/Time Life Pictures/Getty Images hide caption 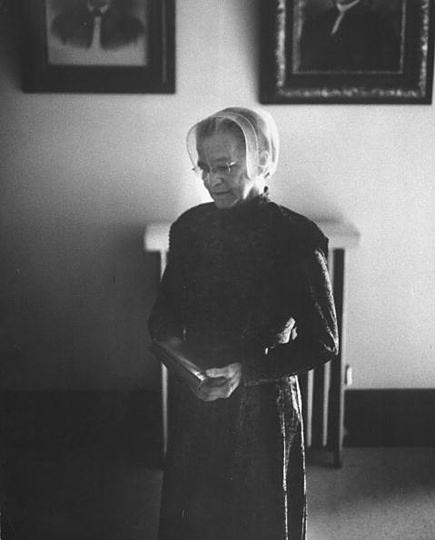 The Shakers splintered from an English Quaker community in 1747. During the 19th century and into the 20th, in communal agrarian villages across the U.S. Northeast and Midwest, the Shakers prepared nearly all of their own food, abhorred waste and were thrifty with resources. This Shaker woman, from Sabbathday Lake, Maine, is pictured in the 1960s. 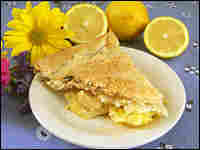 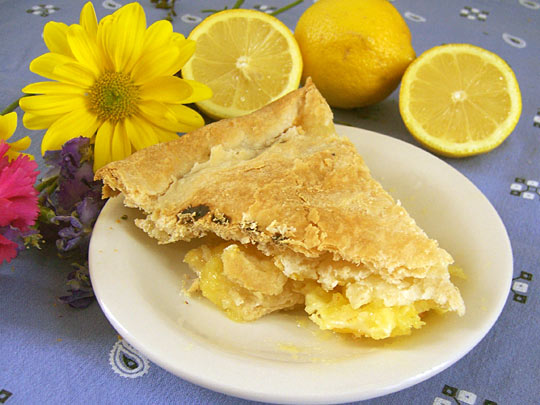 The Shakers left many recipes for simple, wholesome food prepared with exactness and imagination.

Get recipes for Cream of Asparagus Soup, Shaker Garden Salad and Herb Dressing, Peas and New Potatoes in Cream and Shaker Lemon Pie.

The Shakers did "sustainable" way before sustainable was cool. And they thought local before the word locavore was invented. "Why send to Europe's distant shores for plants which grow at our own doors?" asks one Shaker catalogue.

During the 19th century and into the 20th, in communal agrarian villages across the Northeast and Midwest, the Shakers prepared nearly all of their own food, abhorred waste and were thrifty with resources.

The Shakers — or the United Society of Believers in Christ's Second Appearing, as they called themselves — splintered from an English Quaker community in 1747. Ann Lee, a young English woman, led the sect, which got its name from the rhythmic swaying and ecstatic dancing of its worshippers.

In 1774, Mother Ann, as her followers named her, and eight other Shakers emigrated from England to America, settling near Albany, N.Y. In 1787, the members withdrew from mainstream society to establish the first Shaker community in New Lebanon, N.Y. By the 1840s, 6,000 people were living in 19 highly organized Shaker communities mainly in the Northeast, Ohio and Kentucky.

In all the communities, men and women lived separately. The women who prepared the food were called "kitchen sisters." They cooked for large numbers. In some Shaker villages, 300 sat down for meals.

The Shakers left many recipes for simple, wholesome food prepared with exactness and imagination. At a time when the typical American diet revolved around fatty, preserved meats and starch, the Shakers understood nutrition. They emphasized natural, unadulterated food, whole grains, fruits and vegetables. Things recognized today as nutritious — cooking many vegetables with skins on, saving the liquid from boiling vegetables for soup — were routine Shaker practices.

The Shakers became highly successful entrepreneurs, selling their herbs, seeds and many prepared foods, such as canned fruits and vegetables. At the end of one growing season in the mid-1800s, the Shaker community in Pleasant Hill, Ky., canned and sold more than 3,000 jars of peaches to the outside world.

Though the Shakers set themselves apart much as the Amish have, they did not reject new technology. Their inventions include a dough-kneading machine, a water-powered butter churn and a mechanical apple parer. The revolving bread oven of one community's design baked 30 loaves at once, distributing heat evenly through a series of dampers.

Each society owned as many as several thousand acres of land devoted to the hard work of self-sufficiency, reflecting Mother Ann's counsel to "put your hands to work and your hearts to God, and benefits will befall thee." Members rose before dawn to begin their day, working in the huge orchards, airy, spacious barns, workshops and large, well-designed gardens.

From 1837 to 1847, the New Lebanon ministry, concerned with animal welfare, encouraged Shaker communities to go vegetarian. However, food choices were left to the individual member's conscience. For a time, those eating a "bloodless diet" were served in one part of the dining room, those eating a so-called "regular diet" in another.

Alas, the Shakers were sustainable in all ways but one. They were celibate. New members arrived only by conversion or when a community took in orphans. By the early 20th century, unable to compete with industrialism and facing dwindling membership, the remaining Shaker communities began folding one by one. Just one Shaker village — Sabbathday Lake in Maine — still has active members. Shaker recipes, however, live on. 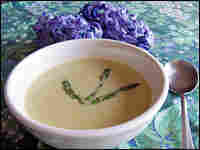 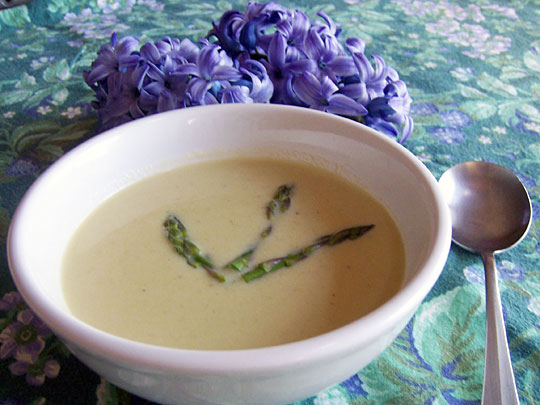 This recipe is adapted from The Best of Shaker Cooking, by Amy Bess Miller and Persis Fuller (Macmillan 1985).

Cut asparagus free of tough ends. Cut 2-inch tips off and reserve. Cut remainder of stalks into small pieces, place in medium-sized saucepan, cover with water, bring to a boil and cook 10 minutes uncovered. Add onions and stock and cook to reduce the broth further.

Remove from heat and force pulp mixture through sieve. Set aside the liquid.

This recipe is adapted from The Shaker Cookbook, by Caroline B. Piercy (Random House 1953). Rub your wooden salad bowl with a clove of garlic. Gather together 2 large handfuls of the very tender young leaves of spinach, 2 inside stalks of celery, florets plucked from a head of cauliflower and a dozen baby carrots only 2 inches long. Wash all vegetables well, dry, chop coarsely. Place in the wooden bowl. Serve with Shaker herb salad dressing.

Add onion, salt, mustard, pepper, thyme and savory to vinegar and blend in the oil.

Toss onto greens above.

Peas and New Potatoes in Cream 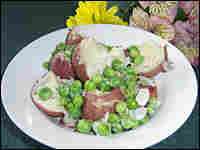 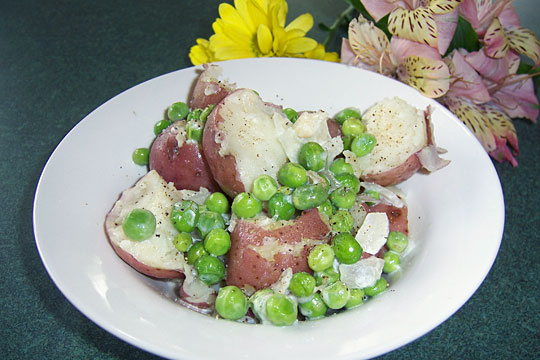 This recipe is adapted from The Best of Shaker Cooking, by Amy Bess Miller and Persis Fuller (Macmillon Publishing Co. 1985) .

Place whole potatoes in a large saucepan and cover with water. Over medium-high heat, bring to a boil. Reduce heat to medium and cook for 20 minutes, or until potatoes are easily pierced with a fork.

In a medium-sized frying pan, cook onions in 2 tablespoons of butter at low heat until soft. Add peas and cream, cover and cook until peas are done but not mushy, about 10 minutes.

Remove potatoes from heat and drain. Place them back in the pan, add 3 tablespoons of butter and toss, breaking the potatoes in half with a fork. Add pea mixture to potatoes and stir lightly. Season to taste.

At the restored Shaker Village of Pleasant Hill in central Kentucky, chef Tony Adams prepares original foods such as this Shaker lemon pie for visitors. "You've got to watch it, take care of it, pamper it," he says. "You can taste the difference." If you're looking for a sweet gooey dessert, this isn't it. Rather, this pie is quite tart and very lemony. Lemons were one of the few foods Shakers bought from the outside world, though there is some evidence lemons were grown indoors in some communities.

Bake for 15 minutes. Reduce heat to 375 and bake for about 20 minutes or until knife inserted near edge of pie comes out clean.

Mix flour and salt. Cut shortening into flour until it forms very small balls. Sprinkle in water, 1 tablespoon at a time, while mixing lightly with a fork, until the flour is moistened. Mix it into a ball that cleans the bowl.

Divide in half. Roll each out onto floured board. Makes top and bottom crust.