Accessibility links
Morgan Freeman's New Role: An Actor, In Extremis After nearly 20 years away from the stage, he's back on Broadway in The Country Girl, directed by Mike Nichols. His character: a washed-up actor with a love for the bottle and an uncertain gift. 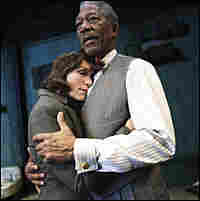 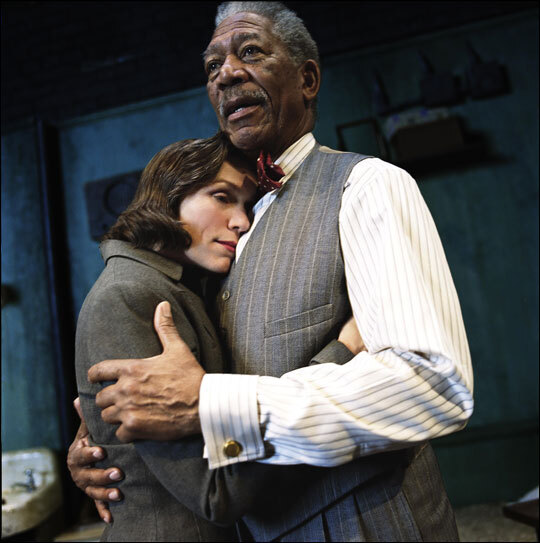 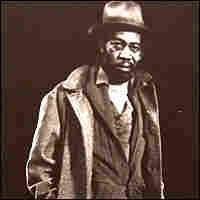 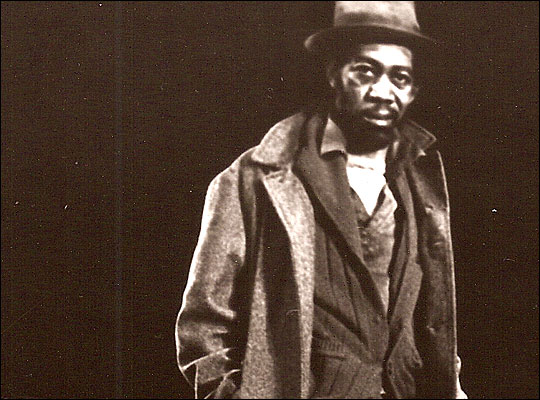 Morgan Freeman played an alcoholic ex-gang member in the 1978 drama The Mighty Gents. It ran a mere nine performances on Broadway — but earned him a Tony nomination nonetheless.

From 'The Country Girl'

'If Looks Could Kill, I'm Dead'

'I Can Tell You're Agonized'

On his dream project — a Western based on a true story — and his love of horses:

On being typecast as the guy with gravitas:

On why Shawshank struck a chord:

'A Love Story, Pure and Simple'

An actor can live — and die — by the power of his voice. And one of Hollywood's most recognizable voices belongs to Morgan Freeman.

A four-time Oscar nominee, he won at last for 2005's Million Dollar Baby. He's played a gravedigger, a chauffeur, the president and God — twice.

But if Freeman is best known for his movies, he cut his teeth in the theater. He made his Broadway debut opposite Pearl Bailey and Cab Calloway in a legendary all-black Hello, Dolly. He earned a Tony Award nomination for the street-gang drama The Mighty Gents. And he drove Dana Ivey's Miss Daisy in the Off Broadway play whose movie version would make him famous just two years later.

Now, after nearly two decades away from the stage — any stage — he's returned to Broadway in a revival of the Clifford Odets play The Country Girl, directed by Mike Nichols. And at least in one respect, the part couldn't be a bigger stretch: Freeman plays a washed-up actor who never made it in the movies and who's disappointed everyone who ever believed in his talent.

In other ways, though, Freeman has things in common with the character of Frank Elgin. Despite his Hollywood longevity, Freeman has had his own career lows. And both men have been intimate with the bottle.

"He's not an addict at all," Freeman says. "He's what you would call a lush."

"A lush likes to drink," Freeman says. "An alcoholic absolutely has to have it. You can't wean him from it; he has to be detoxed."

If that sounds like the voice of experience, it is.

"I had an alcohol problem when I was in my early 30s," Freeman acknowledges. But he says doing the play isn't particularly painful.

"There are difficult places that you've been, but they can no longer be difficult if you've been there and come out on some other side now," Freeman says.

He puts his onetime drinking problem down to frustrations about a career that, at the time, seemed to be going nowhere.

"It's like being a circus roustabout, and you wanted to be an aerialist. ... It's like, Any day now I'm going to get my shot, I'm gonna do it — but you don't.

"And, I don't know, you just sort of come home, and there's a cocktail, which is followed by two or three more. And one day I sort of woke up, and was face down on the floor. ... So I had to quit."

He's backstage at Broadway's Bernard B. Jacobs Theatre, where he's changed into jeans and hiking boots — and in less than 20 minutes, shed not just his costume and makeup but all other signs of the character he's just played.

For Freeman, at least, it's better to keep self and character safely apart.

So he never abandons himself to a role?

"I don't think complete abandon works," he says. "It's a job. You have to control it; if it controls you, I think you can get lost."

Control may be critical to him, but Freeman doesn't remember a time that he didn't want to be an actor. He scrounged recyclable bottles — at 2 cents or 5 cents a pop — to buy 12-cent tickets at the neighborhood movie houses in his native Chicago.

He'd watch anything, he says. His favorite actors: "Every single one I saw, from [B-movie cowboy] Jimmy Wakely ... to Humphrey Bogart in High Sierra. Just name any actor who was working — any, any — I was there. I'd watch the movies every day if I could."

And his first movie memory? King Kong with Fay Wray. It was terrifying enough, he confesses, that he hid under the seat.

Freeman tells NPR about finding characters that fit — "a lot of it depends on story" — about keeping control and letting go in a performance, and about why he's back in the theater after almost two decades.

"I was coerced," he jokes. "Mike Nichols called and said 'Let's do this,' and I said, 'This is one of the guys on your bucket list — you just can't say no."