Accessibility links
Anglican Leader Brings Climate to the Pulpit One Anglican cleric thinks churches can do more to help the Earth, and he's trying to convince ministries around the world to start preaching a change in the way people live. 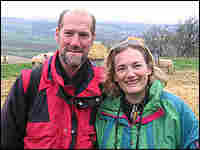 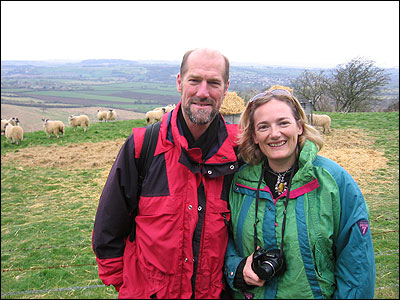 Martin Palmer and his wife, Victoria Finlay, walk an old Roman path every day to the Alliance of Religions and Conservation offices. 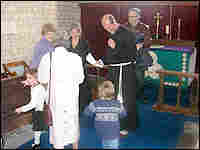 One thing climate experts often say is that people need to change their behavior to slow climate change. And they also acknowledge that they still have a lot of convincing to do before that will happen.

One man, Martin Palmer, argues that religion is a better messenger than science and politics — that it can do things the others cannot.

Palmer is the founder of the Alliance of Religions and Conservation, a small group working out of Bath, England. Its credo is that religions from Buddhism to Zoroastrianism are the perfect groups to become climate activists.

Power to Do Good

For one thing, these religions are in for the long haul. So they can tackle long-lasting problems like climate change. They also know how to talk to people — and not with scientific data.

"There are tens of thousands of scientists who do that perfectly well," Palmer says. "What we want to bring is the passion, the commitment ... and the interpretation of meaning that religion brings to that data."

Palmer says faiths can be very different on the subject of nature. Some see humans as stewards of the earth, while others believe the opposite — that nature protects humans. But Palmer's group has found messages about nature in nearly every faith they've examined.

With these messages, Palmer and his colleagues at the Alliance travel the globe, cajoling religious leaders to learn about climate change and take the message to their followers. And those leaders bring more to the table than faith — Palmer says they control as much as seven percent of the world's forests, forests that help curb global warming. The various official churches are, taken as a single institution, the world's third largest investor.

The Alliance advises church leaders to use this financial power to do environmental good. They instruct churches in investing in green projects and logging their forests in a more environmentally friendly way. For instance, they've helped Sikhs in India find alternatives to fossil fuel for their network of kitchens for the poor.

Keeping Promises to the Earth

Palmer found his own faith as a child. He grew up in a working-class public housing project and when he was about ten years old, he had a fight with his parents and he ran off. He ended up at Wells Cathedral, one of England's finest cathedrals.

"I needed to be in a place of beauty," he says. At the cathedral he listened to Evensong, admired the vaulting architecture, and decided then that the little voice he'd heard in his head was a call to faith.

These days, Palmer brings his view of earth and heaven into the pulpit of his own church, just 200 yards from his house. On one April morning there are about a dozen parishioners in the pews, bundled up in winter coats. The church is humble, several hundred years old, and freezing.

"As you all know we're a carbon neutral church," he reminds them, laughing. "We rely on thermal underwear and body heat."

Palmer says priests and rabbis and imams know how to explain complicated, abstract ideas by using parable and metaphor. On this day, he tells a creation story from the ancient Jewish text, the Talmud.

"The Talmud says that the angels went to God and said, 'You just created this wonderful world and now you've created these human beings who will only go and mess it up. Are you start staring mad?' And God says, 'I know what I'm doing. I know what I'm doing.' And then the earth spoke, and the earth was afraid. And the earth said, 'These creatures, they will only rebel against me and harm me.' And God answers, 'I promise you that they will never be allowed to destroy you.'"

Palmer sees it as his job to help God keep that promise.

Approaching Climate Change from the Heart

After church, Palmer laces up his muddy boots and walks an old Roman path to his home. When Romans lived here, and the climate was warmer, they grew grapes along this path. Experts say the climate will become warm like that again. But Palmer says experts usually don't know how to get people to do anything about it.

"The predominant model [of] the environmental movement ... is sin and guilt, topped by a good dollop of end-of-the-world language," he says with some disdain.

The better model, he says, is for people to celebrate nature and their place in it. That's a message that resonates with the United Nations, which is collaborating with the Alliance to organize world faiths around the issue of climate change. U.N. officials say they need people who can speak about climate change straight from, and to, the heart.

Palmer says that's a job he can do — with help from monks, priests, ministers and clerics of all faiths.

"My understanding of my God — and I work with many, many different religious traditions — is that my God is not there to solve the problems," Palmer says. "My God is there to say, 'You are co-creators with me, now... work out what that means.'"

"It is not about, if we pray hard enough to God, he will end climate change. Yes, we should pray to God. We should also get off our backsides, get out there, and do something about it," he says.

Alliance of Religions and Conservation