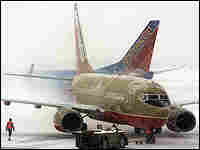 Southwest flights try to make it out of the gate area in February 2007 at Midway airport in Chicago, Ill. Snow and cold weather delayed flights in and out of Midwest airports all that day. Jeff Haynes/AFP/Getty Images hide caption

Southwest Airlines, the airline that prides itself on its customer service, opposes a federal Passenger Bill of Rights.

The bill was introduced after American Airlines and Jet Blue left passengers trapped on airplanes for eight hours and longer during winter storms. Jet Blue's CEO David Neeleman said that his airline should have done what Southwest Airlines did that day, which was shut down its service to the East Coast a lot sooner.

Southwest Airlines' flight operations coordination center handles 3,500 flights a day, more passengers than any other airline in the world. Inside, it's big and dark, and hundreds of flat-screen computer displays give a soft light.

Very recently, they added customer service coordinators. Their job is to be on-the-scene advocates for Southwest's passengers, so that when things go wrong — as they do often in the airline business — the customers aren't forgotten.

Southwest employee Randy Hopkins is trying to get passengers from a broken plane in Harlingen, Texas, onto a different flight to their end destination. Their trip is no longer going to be the way it was originally drawn up.

"We call it a voodoo connection," Hopkins says with a laugh. "We get 'em there. It may not be the same time, it will be an hour or two later."

Say you're on a flight that goes terribly wrong, so wrong, in fact, that when you finally get home, you write a letter to the airline to complain. If you're lucky, the airline writes back and sends you a voucher.

Southwest's president decided that was a bad way to relate to angry customers.

"My goal was that we would reach the customers that were impacted by a highly unusual irregular operation before they could reach us," Barrett recalls. "And history has taught me over 35 years, that if people are really ticked off, so ticked off that they are going to sit down and try to compose something, it's going to take them three days."

So twice a day, once in the morning and once in the afternoon, Southwest's customer advocates are briefed on the day's operations.

When there are problems, the customer advocates must investigate and then write a letter to each passenger affected. The letter will explain exactly what happened, why it happened, apologize and include a voucher to make it up to the customer. The worse a customer has suffered, the more the passenger gets.

The letter is to be at the passenger's home within 72 hours of the incident.

While Southwest's apology may be nice, the real idea here is to demonstrate that the airline is on top of things, by being able to explain what happened on that particular flight. All airlines gather this information for themselves; until now no one has systematically shared it with customers.

Barrett doesn't want any more federal regulations. She believes that if other airlines are leaving passengers on the tarmac for six or eight or 10 hours, it will be good for Southwest's business.

"I feel the marketplace should dictate who provides the best customer service and I think that passengers vote for that with their pocketbooks," she says. "I just don't want the government telling me what I need to do for every given specific situation."

Southwest is aggressive about cancelling flights when there are storms. They say they've learned to shut operations down early and to resist the temptation to keep going another two or three hours to see how the weather will play out.

But air travel is complex, and the best plans can quickly come unraveled. Southwest knows better than to display any hubris regarding the competition's recent misfortunes. After all, pride does go before a fall. And next time, Mother Nature could wipe those smug smiles right off their faces.

Text of Senate proposal for Airline Passenger Bill of Rights