In many theaters across the country today, a pair of comical Asian-American stoners named Harold and Kumar will be escaping from Guantanamo Bay. But on select screens, a more serious prison scenario will play out. It's a new Errol Morris documentary called "Standard Operating Procedure." The film examines the prisoner abuse scandal at Abu Ghraib.

Our reviewer Bob Mondello says that as with most Errol Morris films, it is an eye opener.

BOB MONDELLO: There's a lot of cinematic flash in "Standard Operating Procedure" - elegant camera work, reenactments of crucial events, computer graphics designed to dazzle. But the film is built around something more basic, as an investigator tells the camera early on.

Unidentified Man #1: In all my years as a cop, I'd say over half of all my cases were solved because the criminal did something stupid. Taking photographs of these things is that one something stupid.

MONDELLO: Those infamous photos - naked human pyramids, naked men on leashes, that hooded man on the box with wires stretching from his hands - long, snaking lines of photos that rearrange themselves digitally on the screen as the investigator talks of how he established a timeline to help guide the prosecutors.

Unidentified Man #1: When did the incident begin, and when did it end? How much time elapsed in between these photographs?

MONDELLO: Once that timeline is established, the people in the photos talk about the photos - their narratives pushed along by Danny Elfman's score - talk about what they were thinking, what they did, what they saw.

Unidentified Woman: It was his box. He had to hold it, he had to stand on it. It was cold, so he had blanket on. I mean, he was never physically ever touched that I saw, he was just very, very tired. When I got there, he was in the shower. There was wires on his fingers, and he was told he would be electrocuted if he fell off.

Unidentified Woman: There was no electricity going through the wires. And to say, hey, if you fall off, you're going to be electrocuted, I mean, that would keep anybody awake. So it was part of the sleep plan(ph).

MONDELLO: As you can hear from the scoring, there's a lot of, let's say, art to what director Errol Morris is doing. When he wants you to notice a knee in the corner of a photo and realize someone else was there, trust me, you're going to notice it. He's made a career of heading down familiar paths to find things that others missed on their journeys.

His film "The Thin Blue Line" led to the overturning of a murder conviction. His "Fog of War" reconsidered the legacy of Vietnam, and his intent in "Standard Operating Procedure" on taking the Iraqi prison scandal we think we know and demonstrating how much about it we don't know. How much of what happened - according to the very soldiers who were court-martialed for participating in it - happened outside the frame. Look, he keeps saying, outside the frame.

MONDELLO: You can argue with the director's decision to reenact, to bring alive the ghosts haunting the hallways of Abu Ghraib, to use all those whooshing, rumbling effects to supercharge testimony. But Morris is a consummate showman, and whatever you think of how he gets there, the conclusion he encapsulates in that title, "Standard Operating Procedure," is a thought-provoking corker, that what most of those photos show is not nearly as out of the ordinary as we'd like to think it is. 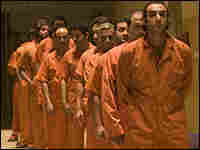 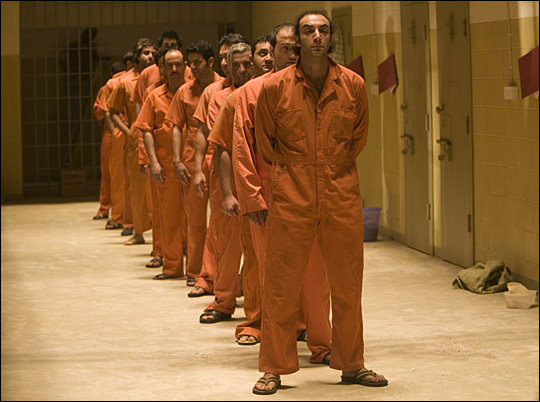 Using thousands of photographs taken at Abu Ghraib, director Errol Morris assembles a portrait of the prisoner-abuse scandal there.

If Errol Morris' passion for detail often leads him down paths others have trod, you can't accuse him of reaching the conclusions others have drawn on their journeys. Whether securing a retrial for a convicted murderer (The Thin Blue Line) or reconsidering an entire historical legacy (The Fog of War: Eleven Lessons from the Life of Robert S. McNamara), Morris makes documentaries that shake up long-accepted narratives.

Now, in turning his lens on Abu Ghraib, he takes a military prison scandal we think we know and shows us things about it that we don't know. A photo timeline reconstructed by investigators, for instance, doesn't just help to implicate participants who were cropped from the most widely disseminated photos, it also helps demonstrate Morris' central theme: the need to "see outside the frame."

In interviews, soldiers articulate the rationales — and the rationalizing — surrounding unambiguously perverse acts, which makes them seem at once monstrous and all too human. Certain romantic entanglements may also come as surprises to some: It's Lynndie England who's often associated with Charles Graner (she bore his child), but Megan Ambuhl's reference to Graner as her husband will startle those who don't know that they married in 2005, after Graner's trial.

While you can argue with Morris' decision to re-enact certain moments for the camera — and with the ominous Danny Elfman rumblings he underscores them with — the effect is certainly powerful, especially in a final sequence that stamps many of the photos either "Criminal" or "S.O.P.," in line with the film's title. Think you know your country's standards, and those of its military? Just wait 'til you see which photos get stamped "Standard Operating Procedure."