Accessibility links
Justin Townes Earle: Sobering Up to Music The Nashville singer-songwriter Justin Townes Earle is trying to make his own career in music. But it comes with some history: His father is the outspoken Steve Earle, and at 25, Justin has already fought off a powerful drug habit that nearly killed him.

Hear the full versions of songs Earle performed for NPR:

Who Am I To Say

AUDIO EXTRA: Earle talks about the influence of his grandfather and the Civil War, and performs another song: 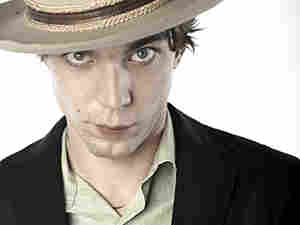 The Nashville singer-songwriter Justin Townes Earle was addicted to drugs until the day a friend dragged him to the hospital.

"I suffered respiratory failure after being awake for 14 days," Earle says. "I've always known that, like, if you walk into the emergency room, and first off they don't make you wait — like they go 'oh God, you come here' and they grab you — you know you're in trouble. And then you know you're in double trouble when the scissors come out and they start cutting your clothes off."

Earle says he's been clean for four years now. He recently released his debut album, The Good Life. Early one morning — early for a musician anyway — he came to NPR's studios to play a few songs and speak with Steve Inskeep. Only hours earlier, he had performed live.

Justin Townes Earle carries the name of two acclaimed songwriters: Townes Van Zandt and Earle's father, Steve Earle. Despite his age — 25 — he's been writing songs for many years. But it took him years to get his own songs recorded because of his chaotic early life.

Take the song "Ain't Glad I'm Leaving," which Earle says he wrote at age 15 or 16. His lyrics ask: "Because I lie, cheat and gamble, and I steal from many men / Well, from Georgia to Los Angeles, Texas up to Maine, I'm a wanted man / Is that the kind of life you want to lead?"

"I think at the time that I wrote it, I was trying to tell everybody something about myself," he says. "I do advertise it at shows as a warning, but then again, it is a performance in a show."

Steve Earle has had his own public struggles with drug addiction. So you couldn't really call Justin a rebellious teenager.

Not that his father didn't warn him against it. "My dad's a big finger-wagger," he says. "He's full of advice."

Earle says he was just like any other teenager: "There's no such thing as a teenager that listens to a single word their father says."

Despite his connections in the music world, it was only when he met friend and collaborator Scotty Melton that Earle began to think about his musical career.

"He was giving me all the same advice that my father gave me," Earle says. "And the only difference was that I listened to Scotty. ... And it's a lot easier for anybody to listen to somebody that you can get high with or I could have a drink with. And that wasn't going to happen with my father."

As for his drug and alcohol abuse, Earle says that his failing body forced him to kick the habits.

"I wouldn't say that I'm stable, but I know that I'm very happy and comfortable living without the use of drugs," he says. "And I've been lucky that I haven't had the urge to get high or drink. And I'm just hoping that that stays away."