Accessibility links
In Cairo Slum, the Poor Spark Environmental Change In one of the city's poorest areas, residents who recycle trash by hand and a handful of environmental activists are slowly improving their community. Their efforts serve as an unlikely model for environmental change in an age of global warming. 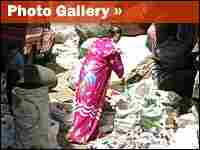 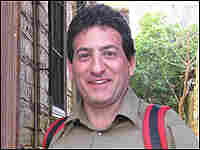 Thomas Taha Rassam Culhane is the founder of Solar Cities, an organization that is installing solar hot-water heaters on the rooftops of Coptic Christian and Muslim communities in Cairo's slums. hide caption

In Cairo, the heart of the city's upscale area is known as Zamalek, a lush island neighborhood in the Nile that thrives with tourists and commerce. Only a short car ride away lies a sprawling slum where impoverished residents have learned to make a living off the trash from Zamalek and other parts of the Egyptian city.

Manshiyet Nasser, with its narrow dirt streets and precariously built houses, is home to tens of thousands of people. They are the Zabaleen, which in Arabic means "garbage collectors," and they have gathered and recycled Cairo's garbage by hand for decades.

While their means of survival may seem lowly, a closer look at this primarily Coptic Christian community reveals that something greater is going on. Here — in the most unlikely of places — the urban poor and some innovative young environmentalists are bringing about environmental change in an age of global warming.

'Living in the Worst of It'

The Zabaleen, like people living in poor countries around the world, are on the front lines of climate change. The United Nations reported last year that greenhouse gas emissions will have disproportionately negative effects on the planet's most impoverished nations — and it cited Egypt as an example.

For the people in Manshiyet Nasser, environmental degradation is already a reality, says Thomas Taha Rassam Culhane. He is the founder of Solar Cities, a nongovernmental organization that is installing environment-friendly solar hot-water heaters on the rooftops of Coptic Christian and Muslim communities in Cairo's slums.

"They're already living in the worst of it. They don't want to see it getting any worse," he says.

Culhane, who is studying for his doctorate in urban planning at UCLA, says poor people like the Zabaleen don't leave a large carbon footprint because their individual energy use is low. But he says their sheer numbers create a problem for the economy because the power they do use is subsidized by the government.

The poor don't usually snap to mind when it comes to practicing conservation, Culhane says. But the Zabaleen are doing just that.

Using small vehicles and donkey carts, they haul massive bundles of trash from Cairo — and about 80 percent of the garbage they bring into the community is recycled by hand. Children as young as three sit with their mothers and grandmothers and sort through broken glass, scraps of metal, aluminum cans, dirty diapers and rotted food.

"I'm working all the time," says one woman sorting through piles of refuse. "My hands get dirty, there's no water. The price of food is too high. The gas has gone up to seven pounds a bottle, so it's expensive to heat.

"Everything is so expensive, and I have to live like this?" she says.

A few years ago, Culhane says, the Egyptian government decided to privatize the country's waste-management system, threatening the Zabaleen way of life. But foreign companies hired to do the job found that their garbage trucks couldn't navigate Cairo's narrow streets the way the donkeys could. Today, the slum's residents still collect much of the city's trash.

Culhane says counterfeiters used to sift through garbage, take Procter & Gamble shampoo bottles, fill them with cheaper products and resell them. To get the bottles off the streets, the Cincinnati-based company agreed to fund the school and help the community learn how to recycle plastic.

Today, the school is colorfully painted with P&G shampoo bottles, and serves as a center where young people can learn about the business and economics of recycling. Students are trained to use Excel spreadsheets, and they learn how to shred plastic in machines, wash and dry it using solar energy, bag it and send it out to be melted down for reuse.

Procter & Gamble says that in the past six years, more than 150 children have attended the school, which was created by Laila Iskandar, an education reformer, and local director Azit Nyan Ghindi. And more than a million containers have been recycled.

On the school's rooftop, Solar Cities has installed one of its solar hot-water heaters, and students are taking notice, says Geraldine Samir, manager of the school's scholarship program for girls.

"For the first time, they start to think about other sources of energy. Because for them, energy was gas," Samir says. "So they started to think there are problems not only of the area, some are worldwide."

Hanna Fathy, a young environmentalist who lives in Manshiyet Nasser, works on the Solar Cities project. His neighborhood is home to many of the local craftspeople, and they've played a key role in helping Solar Cities install solar water heaters throughout the community. Culhane says the local steel cutters, copper welders and glass makers made it easy to build his systems.

"We just brought copper pipe and said, 'Hey can you do it like this?' Then they say, 'But we could improve it if we did it like this.' " Culhane says. "Then you have this collective intelligence. People here are very talented it's a participatory process."

Fathy, who taught himself English and put himself through school, has one of Solar Cities' heaters on the roof of his four-story home. A bright blue barrel filled with cold water is connected to solar panels made from recycled garbage bags, framed in aluminum and covered with glass. The aluminum frame is attached to a Styrofoam block by an array of recycled plastic and copper tubes.

Fathy says his neighbors often laugh when they see the contraption — but many are intrigued.

"I work in the street and I talk to them about the system and they say 'Tell me the story, talk to me, tell me what's happening,' " Fathy says. "And they see very hot water, and many of them ask me to get the system."

Shifting to a solar-powered water heater can help prevent climate change, Culhane says, because it lowers a household's carbon-dioxide emissions by as much as 35 percent.

He and Fathy say they're building solar hot-water heaters in places that are visible from the elegant local monastery, in the hope that residents and visitors will spot the bright blue barrels

"We want to create as much exposure as possible," Culhane says.