Accessibility links
Looking Ahead to Indiana and N. Carolina Primaries Sens. Hillary Clinton and Barack Obama head into the Indiana and North Carolina primaries next month. Amy Walter, editor-in-chief of The Hotline daily political brief, talks with John Ydstie about which voters might give a boost to either Democratic presidential candidate.

Listen
Looking Ahead to Indiana and N. Carolina Primaries

Sens. Hillary Clinton and Barack Obama head into the Indiana and North Carolina primaries next month. Amy Walter, editor-in-chief of The Hotline daily political brief, talks with John Ydstie about which voters might give a boost to either Democratic presidential candidate.

Senator HILLARY CLINTON (Democrat, New York; Presidential Candidate): It's a long road to 1600 Pennsylvania Avenue, and it runs right through the heart of Pennsylvania.

While Hillary Clinton was in Philadelphia, celebrating her victory in the Pennsylvania Democratic primary on Tuesday night, Barack Obama was already back on the campaign trail. He was in Indiana, which holds its primary on May 6th. North Carolina's primary is the same day.

Either or both primaries could hold the key to the presidential nomination. Amy Walter is editor in chief of the Hotline, the National Journal's daily, online briefing on politics. She joins us from her office in Washington, D.C. Welcome.

Ms. AMY WALTER (Editor in chief, Hotline): Well, thank you for having me.

YDSTIE: So who's got the advantage in these states?

Ms. WALTER: North Carolina, that's a state where, when you look at the demographics of that state - and let's face it, in the contest here for the Democratic nomination, demographics have been destiny. And North Carolina has a significant African-American population very similar to Georgia or South Carolina, two places where Barack Obama obviously has already done very well. So the expectation is Obama wins in North Carolina.

Indiana is the tougher call. And in fact on Friday, two new polls came out in Indiana, both showing the race basically within the margin of error. And the question there is, as always, who's going to come out and vote.

This is a state that on the one hand, looks very much like a state where Hillary Clinton has done well. There's a big blue-collar population, there are a lot of rural areas. It feels a lot more like Ohio than Illinois, which is obviously Indiana's neighbor. But the fact that it does bump up against -shares a border with Illinois, is helpful to Barack Obama.

Forty percent of Democratic voters in that state get their television from Chicago, and so right now this is one of those places I think if we're looking for a breakthrough, Indiana may give it to us.

YDSTIE: After Pennsylvania, Senator Obama was quoted as saying that his problem - if there is a problem = is more with older women than it is with working people. Would you agree with that?

And so what we're coming out with, though, is really a bifurcated Democratic primary electorate. Neither candidate has been able to break the logjam. We saw a little bit of in Wisconsin, where Obama was able to do better among women, to win over those voters who make less than $50,000 a year, who don't have a college education. But the rule really has been that those are Hillary Clinton voters.

YDSTIE: One of the arguments that Senator Clinton and her campaign make is that she's ahead in the popular vote because she won Florida and Michigan, whose contests were disowned by the Democratic Party because they broke the rules and held them too early. Is that argument likely to get any traction with the superdelegates?

Ms. WALTER: The fact that, you know, she may have won some of those big states or that if you include Florida and Michigan she actually has more popular votes doesn't necessarily jibe with the way that national polls look in terms of who'd be the better candidate to face John McCain.

So I think that, you know, when it comes right down to it, on June 3rd, we'll see just how much of a case she has to make, whether Florida and Michigan would have made that difference. Remember, we still have some other big states coming up, and the margins there - if Obama is able to rack them up - may make Florida and Michigan a moot point.

YDSTIE: Amy Walter is editor of National Journal's Hotline. We spoke with her from her office in Washington. Thanks very much.

Indiana: A 'Crossroads' for America's Democrats?

Indiana: A 'Crossroads' for America's Democrats? 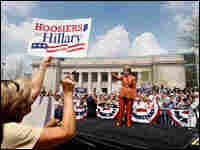 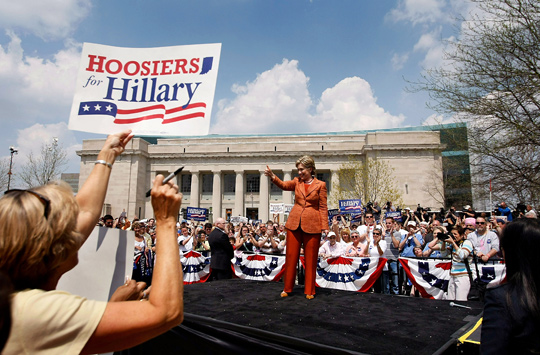 Neither candidate has a clear advantage as they seek the 72 pledged delegates at stake in Indiana's primary on May 6. The state of the race so far: 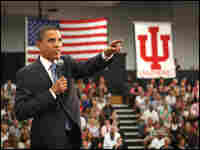 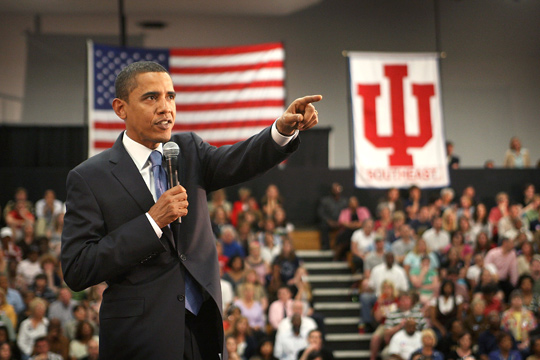 As the site of the next Democratic presidential contest, Indiana finds itself in an unaccustomed position: the political spotlight.

Along with North Carolina, Indiana holds its Democratic primary on May 6. Both Sens. Barack Obama and Hillary Clinton campaigned in the state on Friday.

And both candidates stressed the state's importance. Obama told Hoosiers that their votes could be the "tie-breaker" in the Democratic race, while Clinton said Indiana may ultimately decide who becomes the next president.

The state seems tailor-made for a vital political role: Known as the "crossroads of America," Indiana has more interstate highway miles per square mile than any other state (which is convenient for campaigning).

With its presidential primary taking on national importance for the first time in 40 years, a closer look at the state seems in order.

Despite producing much corn, soybeans and livestock, Indiana's agriculture is not the driving force of the state's economy.

"If you want to characterize Indiana relative to the nation, we are a manufacturing state, not a farm state," said Don Coffin, economics professor at Indiana University Northwest in Gary.

Standing in downtown Gary, in the shadow of the massive U.S. Steel Gary Works plant, Coffin said, "This is sort of the epicenter of what has been the core of the northwestern Indiana economy."

Northwest Indiana still produces tons of steel — in fact, more tons today than ever before... but the mills do it with fewer workers. They employ about 20,000 people today, compared to a peak of around 100,000 workers 40 years ago.

Since 1970, Coffin says, the industrial cities along Indiana's Lake Michigan shoreline — Gary, Hammond, Whiting, and East Chicago — have lost about 40 percent of their population.

"Lakefront cities have been extremely hard hit," Coffin said. "[They've been] in decline for 30-40 years."

That makes the area a less powerful voting block than it was. But it is still significant for Democrats — as indicated by Clinton's plan to meet with steelworkers in Gary on Friday.

Indiana is also prominent in the auto industry. Historically, it is second only to neighboring Michigan. The state is dotted all over with factory towns: Fort Wayne, Muncie, New Albany, Kokomo, Anderson — where Obama campaigned Friday.

But the towns have been bleeding jobs. All across the state, the economy is the No. 1 issue to Indiana voters.

"People are worried, people are struggling," said Gina Morris of Indianapolis. "They really are. Two-income households, it doesn't really matter at this point."

Morris works for a Medicaid provider.

"I know people who have lost their jobs. It's hard to find a job," she said.

Advantages for Both Clinton, Obama

In presidential elections, Indiana is usually seen as a red state — at least for the past 40 years. But for statewide office, Indiana often elects Democrats.

Sen. Evan Bayh won his last election with nearly two-thirds of the vote. Democrats held the governor's office for 20 straight years, until 2004. Democrats control the Indiana House and now hold five of the state's nine seats in Congress.

Some say that success may rest on a particular brand of Democratic ideology.

That conservative bent would seem to benefit Clinton, who has done best in rural, blue-collar states like Pennsylvania and Ohio.

But Indiana is also next door to Obama's home state of Illinois. In fact, his home on Chicago's South Side is just a couple of miles from the Indiana state line.

"People who live up there get almost all their news from Chicago, their television; they're in that market," Ferguson said.

That fact, taken with the large number of African-American voters in Gary and Indianapolis — and the fact that Indiana's primary may attract independents — makes it fertile ground for Obama.

"It's going to be off the hook here on Election Day," said Amos Brown, who hosts an afternoon talk show on Indianapolis radio station WTLC.

"When I hit the air at 1, the phones light up like a Christmas tree," Brown said.

Brown says his audience and voters across the state are enjoying their rare moment in the national political spotlight, and having Washington and the media pay attention to their issues.

The renewed interest, Brown said, could mean that the Democratic winner of Indiana's primary could prove in November that Indiana isn't so red after all.