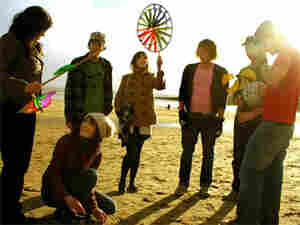 Coming off like a more youthful Broken Social Scene, the Welsh band Los Campesinos! plays bratty indie-pop, with an emphasis on pop. The septet holds nothing back about its influences, namechecking influences in its lyrics, joyfully bursting at the seams with sing-along choruses, and brandishing pop hooks that don't leave heads for days.

After a long string of EPs and singles, Los Campesinos! released its debut full-length, Hold on Now, Youngster..., earlier this spring. It's big on punky energy and doesn't let up throughout its 12 infectious tracks.