Accessibility links
Jazz Clarinetist Jimmy Giuffre: A Look Back Composer and jazz clarinetist Jimmy Giuffre, who died April 24, was an early pioneer of both the cool jazz and avant-garde jazz movements of the '50s and '60s. In Giuffre's honor, WGBH presents an audio documentary recorded in 1994. The program features Giuffre telling his story in his own words. 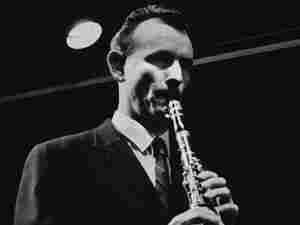 Composer and jazz clarinetist Jimmy Giuffre died on April 24, after suffering from pneumonia and complications from Parkinson's Disease. He was 86. Here, WGBH contributes a 28-minute history of Jimmy Giuffre, recorded in 1994 and narrated mostly by Giuffre himself.

Jimmy Giuffre remains best known for his composition "Four Brothers," which became a hit for Woody Herman. In addition to pioneering the cool jazz movement in the 1950s, Giuffre was an early proponent of avant-garde jazz with the Jimmy Guiffre 3, which included pianist Paul Bley and bassist Steve Swallow.

In 1994, Giuffre received a Jazz Achievement Award from the New England Foundation for the Arts. I suggested to them that the award should include a half-hour radio documentary, which would consist of Giuffre telling his own story in his own voice and music. NEFA liked the idea.

I had done an interview with Giuffre a few years earlier — not knowing what I would do with it, but knowing that I wanted to get his story on tape. Here was the perfect opportunity to use it.

However, by 1994, the year he was given the award, Giuffre had contracted Parkinson's Disease. My co-producer (Margot Stage) and I drove out to his home in West Stockbridge, Mass., and recorded Giuffre, bringing us up to date on his condition. The beginning of this "Portrait" has him telling us about "trying to get [his] horn to behave," and how Parkinson's had begun to take its toll on his ability to play. It then goes back to the earlier recording, wherein he tells us in detail his musical life story.