This is the second in a two-part series. 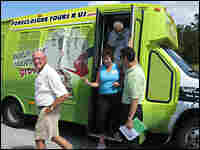 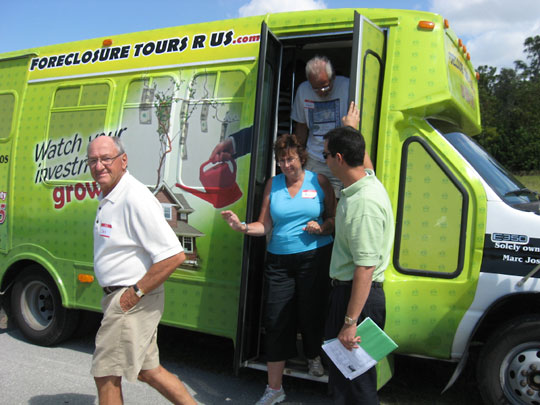 Prospective home buyers file off of real estate agent Marc Joseph's "Foreclosure Tours R Us" bus in Lee County, Fla., where the housing boom has turned into a bust.

Part 1 of This Series

Real estate agent Marc Joseph always figured that when he turned 40 and hit his midlife crisis, he'd go out and buy an expensive sports car — maybe a Porsche or a Viper.

Instead, he ended up sinking his money into the green bus.

Joseph offers tours of bank-owned properties in Lee County, Fla., where the housing boom has turned into a bust faster than you can say "sheriff's sale."

Foreclosures are something of a growth industry in the area these days, with about 40 coming on the market each day, and Joseph noticed not long ago that everywhere he went, people were asking him about how to find them.

So he bought a bus from a church, painted it green and printed "Foreclosure Tours R Us" across the side.

"As a business owner with years of experience, when you realize your business is starting to suffer, you need to make a move or you're going to be put out of business. My move was the green bus, selling foreclosures," Joseph said.

The tours are only a few months old, but Joseph says they are luring a lot of bargain-hunters into the area.

On a recent Saturday morning, Joseph and his staff drove about a dozen people through the streets of Cape Coral, a city of about 160,000 people on the Gulf of Mexico. For three hours, they visited nearly a dozen bank-owned properties, many of which had been marked down more than 50 percent. They included:

The real estate fervor that gripped Florida and other states during the easy-money days of 2005 and '06 has left a glut of unsold properties. Fishkind and Associates estimates that Lee County has a three- to five-year inventory of unsold homes, compared with one year in normal times.

As a result, homes can now be bought for well under the replacement cost, Joseph says.

"There is a lot of inventory on the market, and there's a lot more coming," Joseph says. "The key to understanding what's happening is that when these foreclosures are gone, and we've cleaned up our subprime problem, we will be back to our original market. And that is going to be the point at which everyone is going to say they wish they had done something."

Those showing up for the tour included a Canadian couple eager to take advantage of the favorable exchange rate by buying a retirement home; a Michigan businessman eager to relocate to the area; and a couple hoping to buy an inexpensive condo for their daughter, who has a low-paying bank job.

Prices are "very reasonable. I was down here when they were at their peak, and they've really dropped drastically," said Leo Felber, a retiree with family in the area. He had tried to buy before, but prices were too high.

"I can afford what's down here now," he said.

In fact, the silver lining of the real estate downturn has been that housing has become affordable again. During the boom, working people such as teachers, police officers and service workers had trouble buying homes in the county, says Shelton Weeks, professor of real estate at Florida Gulf Coast University. The high housing costs made recruiting employees into the area much harder, Weeks says.

Joseph says he started the foreclosure tours to keep his business going, earning commissions when he sells bank-owned properties. But Joseph, who grew up in Fort Myers, also believes he is helping Lee County bounce back from the housing bust.

This is the first in a two-part series.

Part 2 of This Series

Just a few years ago, there was a rush to buy property in sun-drenched Lee County, Fla. Bidding wars were common for homes that hadn't even been built yet. But those days are over, and the real estate market there now is clogged with thousands of unsold homes. The decline is so extreme that people are looking for ways to walk away from their properties.

When condominiums went on the market at the gleaming new development of Cape Harbour in Cape Coral, Fla., a few years ago, so many people wanted to buy that the owners had to sell them by lottery. The fact that the towers hadn't been built yet was viewed as a minor concern.

"It was very exciting," recalls real estate agent and resident Robin Speronis. "In the second high rise that went up, all the units were sold within hours."

By the time the tower was finished, the real estate boom had ended, and today many of those same condos are unsold or in foreclosure, Speronis says.

Even more than most parts of Florida, Lee County on the Gulf Coast partied through the real estate boom of a few years ago, and now it's suffering from an especially nasty hangover. More than 19,000 homes are now on the market, and prices are tumbling.

As in the rest of Florida, much of the fervor was driven by speculators who snatched up condos and houses as fast as they could be built, expecting that the days of easy money would last forever. In some condo towers, three-quarters of the units were bought by outside investors hoping to flip them, Weeks says.

Weeks says he even had undergraduate students who waited tables for money who were able to get mortgages to buy and flip properties.

As prices have fallen back to earth, owners have increasingly found themselves owing more than their properties are worth, and are walking away from them, helping to create a backlog of more than 19,000 unsold homes — about six times as many as two years ago.

Marcus Netto, 47, has to work two jobs to pay the mortgage, maintenance and taxes on the two Fort Myers properties he owns; he also has a time-share in Orlando. But he has to dip into savings to cover his expenses.

Although Netto could sell his properties, he is unlikely to receive as much as he owes on them, so he is hoping to arrange short sales. That means finding a buyer and persuading his lenders to accept whatever price they offer. Banks sometimes agree to short sales as a way of avoiding foreclosure, even though they absorb a loss.

Walking Away from Properties

For banks, the number of forecosures and short sales is a big problem.

Even some buyers who can afford their mortgages are opting to quit paying because they owe too much, Speronis says. With prices falling, some amazing deals are now on the market, and owners figure they can better themselves by purchasing another home and walking away from their existing properties, she says.

With so many deals to be had, bargain-hunters are beginning to come into the market, including many from Europe and Canada, trading on the favorable currency exchange rates. Moreover, few new homes are being built. As a result, the huge inventory of unsold homes may be stabilizing or even shrinking a bit, says Russ Weyer of Fishkind and Associates, a consulting firm.

But prices will probably keep falling for a while longer, Weyer says.

Waiting for the Bottom

The problem is being aggravated by the downturn in the economy. With real estate development at a halt, construction jobs are disappearing, and the county's unemployment rate now stands at 6.5 percent. As a result, many construction workers are leaving the area, meaning more homes on the market and even lower prices.

"We have a lot of folks who are here and interested in buying who would take some of this inventory off the market," Weeks says. "But nobody wants to be that first mover. They would all like to wait until they're sure we're at the bottom."