Open Thread: On Rev. Wright as a "Torpedo" 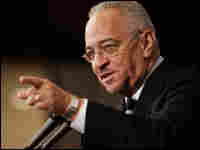 Wright appeared at the National Press Club in Washington on Monday, delivering a speech in which he defended some of his more controversial opinions. Among them was the idea that the United States helped to bring the Sept. 11 attacks on itself. "Jesus said do unto others as you would have them do unto you," he told the audience. "You cannot do terrorism on other people and expect it never to come back on you. Those are biblical principles, not Jeremiah Wright bombastic, divisive principles."

Obama quickly tried to distance his White House bid from Wright. Obama reminded reporters in North Carolina that he has already acknowledged being offended by some of Wright's comments. "He does not speak for me," Obama said. "He does not speak for the campaign." The candidate dealt with earlier controversy over Wright's sermons with a speech in Pennsylvania on March 18. Obama called Wright's worldview "profoundly distorted" but said he wouldn't "disown" him.

On Monday, Wright gave headline writers plenty of fresh material. Wright called the Rev. Louis Farrakhan of the Nation of Islam "one of the most important voices in the 20th and 21st century." Wright told the National Press Club that God desires change — changed lives, changed laws, changed social orders. He said the criticism of his speeches was not personal, but an attack on the African-American church.

Eugene Robinson, an African-American columnist with the Washington Post, wrote, "The problem is that Wright insists on being seen as something he's not: an archetypal representative of the African-American church. In fact, he represents one twig of one branch of a very large tree." Robinson went on to call Wright's recent speeches "egocentric."

But on the Web site for Ebony and Jet magazines, columnist Monroe Anderson argued that Wright's constant presence would help Obama. "In this 24/7 news cycle world, we need all Wright all the time," Anderson wrote, suggesting that the media would soon get bored and move on to other news.

And in Chicago, where Obama attended Wright's Trinity United Church of Christ, the Tribune weighed in with "Wright's Curious Mission." The paper wrote:

By the end of Wright's performance, you had to wonder if he was trying to torpedo Obama's bid for the Democratic presidential nomination. He surely didn't seem troubled by that possibility. 'Nothing can get in the way if God wants Obama to be president,' Wright said. Maybe not. But the pastor seemed interested in testing the theory.

On the blog, an open thread: Is Wright Trying to Hurt Obama?