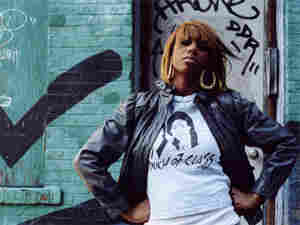 After years as an A&R representative and producer, singer Santogold just released a fully formed self-titled album. Courtesy of the artist hide caption

While Portishead never officially broke up, most fans didn't expect to see the group put out another record. With Third, its first album in 11 years, Portishead has been able to shift from its recognizable trip-hop style to a darker and more industrial electronic sound.

Madonna's Hard Candy is a dance-pop confection that, with the help of producers such as Pharrell and Timbaland, captures the sound of the icon's '80s hits and modernizes it with fresh electronic beats. Goodman says that this combination makes the album "strong, pretty much all the way through."

Swedish pop singer Robyn is a huge star in Europe, so the release of her self-titled album in the U.S. has people expecting a breakout. Goodman says the singer is "just hilarious. She's sassy; she's confident; she is the strong, powerful pop female presence, but she is very witty. It's a really good combination."

While Santi White a.k.a. Santogold often gets compared to M.I.A., she has a distinct sound of her own, incorporating elements of West African percussion and international world music into dance-punk and new wave. After 10 years spent as an A&R representative and an R&B producer, the Brooklyn singer emerged fully formed with her own self-titled album.