Accessibility links
The Roots: Rising Up with 'Rising Down' Ahmir "?uestlove" Thompson of The Roots talks about the band's new album, Rising Down, as well as the scarcity of black bands signed to major U.S. record labels.

Listen
The Roots: Rising Up with 'Rising Down' 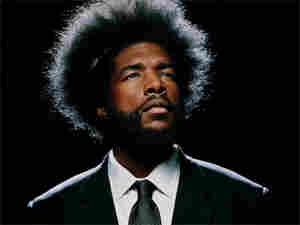 Ahmir "?uestlove" Thompson and The Roots meld politics and hip-hop on Rising Down. Courtesy of the artist hide caption

The Roots' members have been melding politics and hip-hop since 1993, releasing Rising Down this week.

The new record includes a track called "Rising Up!" Roots drummer Ahmir Thompson, a.k.a.
?uestlove, says the titles draw on William T. Vollmann's Rising Up and Rising Down, a book about the psychological nature of violence. "The album in sort of its political hand really deals with how human will use violence before anything,"
?uestlove says.

He notes that the band is from Philadelphia, a city that has been roiled by gun violence, and draws material from tough issues at home and around the globe. That sets the band apart from many more commercially successful acts. "I've been really shocked at hip-hop's whole apolitical stance right now," ?uestlove says.

?uestlove describes his outfit as "the last black band left," saying that no other African-American group has signed with a major label since The Roots did. These days, he says, The Roots must represent not just hip-hop, but also all of music.

On its albums, and more notably in its live performances, the band become known for melting the boundaries surrounding hip-hop. In 2007, The Roots upended a Bob Dylan tribute concert with a mash-up of "The Star-Spangled Banner" and Dylan's "Masters of War." It was the kind of performance that leaves critics struggling for words to describe the explosion they've witnessed on stage.

?uestlove first encountered the song through his father's copy of a Leon Russell record. Russell set Dylan's lyrics to the tune of the national anthem, and ?uestlove completed the circle. "I just married that version to Dylan's version," he says.

On our blog, check out a clip of The Roots' incendiary 2007 performance.