Accessibility links
Le Trio Joubran: Brothers of the Oud The oud is one of the world's oldest string instruments, dating back as much as 4,000 years. But on their new album Majaz, three Palestinian siblings prove that its traditions are still evolving. 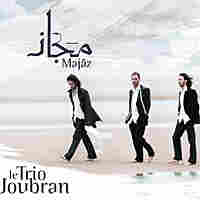 The cover of Majaz. Courtesy of Randana hide caption 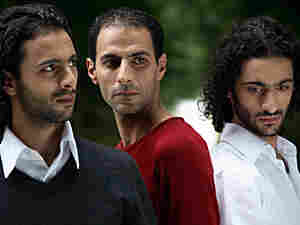 The oud is one of the world's oldest string instruments, dating back as much as 4,000 years. It spread around the world with Islam, and was the precursor of the European lute — and, by extension, the guitar.

For all that history, oud traditions are still evolving. Le Trio Joubran consists of three Palestinian brothers who perform as the world's first oud trio. Now the group has a new recording called Majaz.

Like the oud itself, the Joubran family has deep roots in Arab classical music. But brothers Adnan, Samir and Wissam Joubran, along with percussionist Yousef Hbeisch, are breaking new ground in that tradition.

The oud has long been a favored composer's instrument, like the piano in Western classical music. The difference is that in Arabic music, finished works almost always feature the vocalists, with instruments in a strict accompaniment role. Le Trio Joubran creates moody, interactive compositions in which their ouds do the singing.

The modern oud has a pear-shaped body, a small fretless neck, and 11 nylon strings, 10 of them paired to create a soft, feathered sound when plucked together. Among the 11 pieces on Majaz, there are three solo improvisations, played by each of the three brothers.

Le Trio Joubran takes inspiration from maverick figures in jazz and flamenco, traditions that also put a high premium on virtuosity and stylized improvisation. Sometimes, the three brothers play together in precise unison, or merge their sounds to spin out rich, textured drones and ostinatos. At other times, they stand apart as distinct voices locked in passionate dialogue. At one point, the three brothers break form and actually sing together, on a traditional song called "Min Zaman."

The album title Majaz translates as "metaphor" or "deep meaning." It's a suggestion that, although they rarely resort to words, these brothers do have things to say. With mysterious, seductive eloquence, they communicate profound ideas about history, musical evolution, and the beautiful aesthetics of Arabic music, still far too little-known in Western societies.