Accessibility links
'Post-American World' Offers New Role for U.S. Fareed Zakaria's new book, The Post-American World, argues that the rise of China, India, Brazil and other countries pose a special challenge to the U.S. in this century. He draws a comparison to Britain's experience in the Boer War in South Africa. 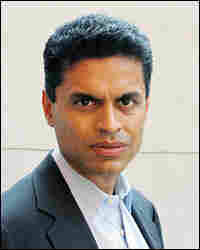 Fareed Zakaria and Robert Siegel discuss how religious perceptions differ among many Americans, Chinese and Indians.

Fareed Zakaria is an optimist: He believes in the ability of the United States to adapt.

But in his new book, The Post-American World, the author and journalist raises a tantalizing argument that the war in Iraq will mark the decline of American power, and that the rise of China, India, Brazil and other countries pose a special challenge to the United States in this century.

Zakaria, a columnist and the editor of Newsweek International, talks to Robert Siegel about a possible precedent for the U.S. in Iraq — Britain's war just over a century ago in South Africa, the Boer War. He also discusses how the U.S. ought to think of its role in the world going forward as being the "chairman of the board."