Accessibility links
Students Compete in Poetry Recitation Contest Each year, high school students from all over the United States come together to compete in a poetry recitation contest — standing center stage with only a microphone and their memory.

Each year, high school students from all over the United States come together to compete in a poetry recitation contest — standing center stage with only a microphone and their memory.

If you're looking for proof that teenagers aren't only interested in texting their friends or finding out who got booted off "American Idol," there is Poetry Out Loud. It's a recitation contest sponsored by the National Endowment for the Arts and the Poetry Foundation, and the winner will be announced tonight. About 200,000 high school students took part in this year's competition. They recited poetry of all kinds from memory.

ELIZABETH BLAIR: At Lisner Auditorium on the campus of George Washington University, the theater is pitch-dark, the audience is quiet, four judges sit down in front. The only thing on stage is a microphone. One by one, students take their turns.

Unidentified Woman #1: Death be not proud, though some have called…

Unidentified Man #1: Don't do it. She's the wrong woman.

Unidentified Woman #2: At pet stores in Detroit, you can buy frozen rats for 75 cents a piece.

Unidentified Man #2: America settles in the mould of its vulgarity, heavily thickening to empire.

BLAIR: Students from all 50 states, the District of Columbia, and the U.S. Virgin Islands have recited a lot of poetry to make it this far in high school, regional and state contests. The judging is tough. Students are scored on physical presence, voice and articulation, level of difficulty and understanding. They picked three poems from a list of about 600.

Dana Gioia is chairman of the National Endowment for the Arts.

Mr. DANA GIOIA (Chairman, National Endowment for the Arts): And what we really want to do is to open up the whole world of poetry to these kids and show them that almost anything that's part of human experience, there is a great poem about.

BLAIR: Allison Strong is the finalist from New Jersey. She says she practiced with her teachers and poets-in-residence at her high school in Union City. It took her a while to get Sylvia Plath right.

Ms. STRONG: It's very easy to get a little over dramatic with that poem. In my classroom competition, I flailed my arms around and I was screaming, and it was ridiculous. And then the poets-in-residence, the judges, told me afterwards, you did great, but you need to tone it down.

Pure? What does it mean? The tongues of hell are dull, dull as the triple tongues of dull, fat Cerberus who wheezes at the gate.

BLAIR: Allison Strong also recited a Shakespeare sonnet and Allen Ginsberg's "Supermarket." She'll go on to compete in Poetry Out Loud's final round tonight. Students are encouraged to choose poems of different styles and time periods.

BLAIR: Tia Robinson, the finalist from Virginia, showed real talent for conveying a poem's meaning, but also for making it her own. She recited poems by Nikki Giovanni and Lucille Clifton. The one who gave her the most trouble? Lord Byron.

Ms. ROBINSON: He's a man and I'm a woman. You know, he's Caucasian and I'm African-American. So it's kind of hard to put yourself in those shoes when you don't really know how he's feeling.

BLAIR: So Tia Robinson pretended she was reading the poem to her mother who died when Tia was 2.

Ms. ROBINSON: A mind at peace with all below, a heart whose love is innocent.

BLAIR: Tia Robinson did not make it to tonight's final round, but she's only a sophomore and plans to compete next year. In the lead-up to the first Poetry Out Loud three years ago, there were complaints that making teenagers memorize poems would just turn them off. But the program is entirely voluntary and it has grown exponentially.

Poet Holly Bass is one of the judges.

Ms. HOLLY BASS (Poet; Judge, Poetry Out Loud): There's nothing like being able to recall some beautiful literature by heart. And the fact that it is almost a lost art in America, it just makes this kind of competition all the more important. 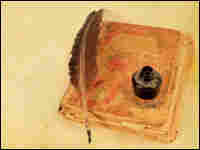 As National Poetry Month draws to a close, we recognize five new volumes that celebrate the form, including verse probing the darkness at the edge of everyday life from U.S. Poet Laureate Charles Simic and hard questions posed in comic fashion from Jane Shore.

Here's a entry from Campbell McGrath's new book, Seven Notebooks, which chronicles a year in the poet's life:

Another week should see the bloom-out
of purest, whisper-green shoots, darkening
all summer to fall...

There's blooming out — and darkening in — in Jane Shore's collection, A Yes-Or-No Answer. This is a domestic book, filled with elegies about the writer's late parents, and hymns to the ambivalence of life. Take the simple cadence and serio-comic feel of the title poem:

Do you double-dip your Oreo?
Please answer the question yes or no.

The surgery — was it touch and go?
Does a corpse's hair continue to grow?
Remember when we were simpatico?
Answer my question: yes or no.

Six more rhyming stanzas later, we get a less-than-reassuring answer to Shore's question.

Belgrade native and current U.S. Poet Laureate Charles Simic offers some assurance about the darkness lying at the edges of everything in a new collection, That Little Something. In the title poem, he writes:

The likelihood of ever finding it is small.
It's like being accosted by a woman
And asked to help her look for a pearl
She lost right here in the street.

She could be making it all up,
Even her tears, you say to yourself,
As you search under your feet,
Thinking, Not in a million years ...

In "Poetry," from his volume, The One-Strand River, published earlier this year, Pacific Northwest poet Richard Kenney worries about the state of the genre:

Nobody at any rate reads it much.

Your
lay
citizenry have other forms of fun.

Still, who would wish to live in a culture
of which future anthropologists would say
Oddly, they had none?

Finally, Thomas Lux, who teaches writing at Georgia Tech, has some fun. Many of the poems in his new book, God Particles, approach life's darkness from a satirical perspective. By now you've been reminded that poets sometimes choose the most ridiculous names for their work. And with Thomas Lux we arrive at the very apex of ambiguity with his poem titled, "Eyes Scooped Out and Replaced by Hot Coals":

I, the final arbiter
and ultimate enforcer
of such things (appointed by the king!), make official
and binding this: that the eyes shall be gouged out
and replaced by hot coals
in the head, the blockhead,
of each citizen who,
upon reaching his/her majority,
has yet to read
Moby-Dick, by Mr. Herman Melville (1819-1891), American     novelist
and poet.