Accessibility links
Abu Dhabi Aims to Build First Carbon-Neutral City Planners hope to transform an empty stretch of desert into Masdar, a city of 50,000, within a decade. They aim for it to be powered entirely by renewable energy, to reuse water and to recycle even human waste. 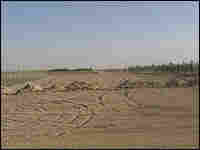 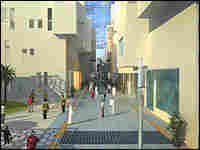 Streets in Masdar City will be flanked by tall buildings to shade most of the city and minimize need for air conditioning. Foster+Partners hide caption 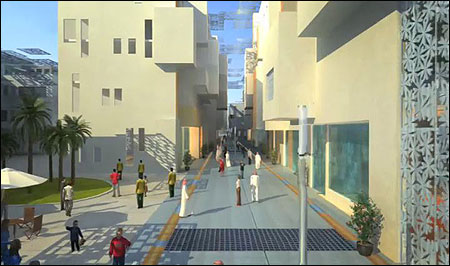 Streets in Masdar City will be flanked by tall buildings to shade most of the city and minimize need for air conditioning. 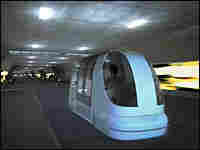 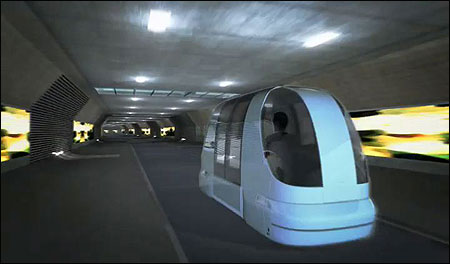 In Abu Dhabi, there's an area of nothing but wind-swept desert. But 10 years from now, if all goes according to plan, a city of 6 square kilometers housing 50,000 people will rise in the United Arab Emirates and it will be carbon neutral.

The project, called Masdar City, will burn no gas or oil, so its contribution to greenhouse gases will be minimal. Masdar is the centerpiece of emirate Abu Dhabi's plans to get into the renewable energy market, a hedge against the day its oil wells run dry.

A computer animation of the design depicts narrow streets shaded by buildings that, though modern, capture the flavor of an ancient Arabic city. It turns out that copying those historic designs will help planners reach ambitious energy goals, they claim.

A Goal to Curb Energy Use

A video of the future site identifies several goals.

One goal: "Masdar will be the first city where carbon emissions are zero."

Narrow streets and shaded walks would reduce the need for air conditioning. The city would be oriented northeast to minimize the amount of direct sunlight on buildings' sides and windows. Solar panels and solar collectors on roofs and elsewhere would generate enough electricity to meet most of Masdar City's needs.

Another goal is to ban cars in the city, which wouldn't be small enough for people to get around just by walking. Designers envision something called a personal rapid transit (PRT) system.

"Really, all it is is a car," says Scott McGuigan of CH2M Hill, the construction firm that's building Masdar City. "It's a simple vehicle [for] six passengers. It's designed like a car, but obviously it's powered by solar energy with batteries."

These solar-powered cars would run under the city like a subway system. But McGuigan says the cars wouldn't run on fixed routes. Basically, they'dl take you anywhere you wanted to go.

"You program what station you want to go to, and [the vehicle] will directly take you to that station," he says. "If you look at things like Blade Runner, etc., that we had 15 years ago, it's really bringing that to the fore now."

An Approach to Recycling Water

The city planners also say that "80 percent of water will be recycled."

This requires a change in thinking, says Peter Sharratt, who works with the British energy consulting firm WSP.

"We have a fairly linear process normally," he says. "We take water in through the tap. We use it, and then it goes straight in the drain. So it gets used once."

But the plan for Masdar City will be to reuse water as many times as possible. For instance, one idea involves capturing the leftovers of watering crops, called irrigation recovery.

It works like this: After irrigation water goes through the top 2 or 3 feet of soil and meets plants' needs, underground collection systems recover whatever's left over. That water then can be used to irrigate on another day or directed to another purpose.

Another main goal is "to be the first city where waste is converted to energy and reduced to zero," according to the planners' video.

In reality, it could come very close to zero, since some stuff just can't be converted to energy or recycled. But when it comes to human waste, Sharratt says it will all be "repurposed."

Ideally, nutrients will be recovered and used "to create soil [that] can then be used as part of the landscaping requirement," he says. "And also a component of the sewer sludge will again go for a waste-to-power scheme."

This strategy to reuse or recycle as much as possible permeates the planning.

McGuigan, the construction manager, says he's constantly looking for materials that can be reused.

"We're looking at recyclable plastic for [construction] site fencing," he says. Later, the fencing can be sold back to the manufacturer, and "he can recycle that or resell that ... again. So it has a useful life at the end."

Planners even have begun to think about how the concrete used to build Masdar City could be recycled for purposes such as road construction when the city is ultimately torn down.

The idea is to build a city that will have no carbon footprint. But because a lot construction equipment uses gas, some CO2 will be released into the atmosphere during that phase. That will have to be offset by planting trees or putting surplus solar energy back into Abu Dhabi's national power grid.

But calculating a carbon footprint is trickier than that, says Liz Darley, who works with the British firm Bioregional, which will assess Masdar City's carbon calculations.

"What they're currently doing is deciding where that boundary is drawn," Darley says. "That is, in itself, quite a complex thing to decide on as a project team ... because it could include all the carbon expenditure of flying between Europe and the Middle East the design team is incurring. It could go to the extent of you guys coming here to interview us. Once you start peeling back the layers of the onion, it just goes on and on and on forever."

So achieving the goal of being a zero-carbon city can be made more difficult, depending on where you draw you boundaries.

Skeptics say reducing Masdar City's total carbon footprint to zero will be difficult, if not impossible. Besides, they say, Masdar would not encompass the millions of others guzzling gas in the United Arab Emirates.

Khaled Awad, who is in charge of turning the plans into a reality, says he's heard the skeptics. Bring it on, he says to them. He invites their suggestions about where they think improvements can be made.

"Look, we're serious about this," he says. "We're going to put so [many] resources to do it right. And this is the ideal place where you can demonstrate what you believe in — in ... a meaningful scale."

The plan is to build Masdar City in record time. The first buildings are scheduled to be up by the end of next summer.

Whether the city will meet its ambitious energy goals is uncertain. But even the skeptics admit it's worth a try.

View an animated fly-through promotional tour of Masdar City, with narration in English or in Arabic.

Learn more about One Planet Living