Accessibility links
So, You Want to Drive a New York City Taxi? A taxi hack needs to know the city streets inside and out — and becoming an ace in cities like New York is no easy task. Noel Hidalgo lets the Bryant Park Project ride along on his first day as a member of Gotham's yellow fleet.

Listen
So, You Want to Drive a New York City Taxi? 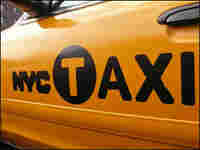 As far as a first day on the job goes, it doesn't get much more daunting than being a rookie cabbie in New York City. Complicating his first day further, Noel Hidalgo picked up a nightmare customer among his first 14 fares: the Bryant Park Project's Mike Pesca.

Hidalgo isn't a typical hack. He is blogging, video-blogging and filing comments on his Twitter feed — and he let Pesca ride shotgun as he navigated the streets of New York and its demanding citizens.

Hidalgo says it's a long process to become a cab driver. There are classes, a physical exam and an English proficiency test. Then there's the geography test, which Hidalgo says he passed with a score of 76.

"I kind of feel like a fisherman already," Hidalgo says. "I have to know where the school of fish are going to be. I have to know how to lay my net down at one particular level and just kind of work from there."

Even as his instincts sharpen, some things are confusing, and Hidaldgo says he has asked veteran cabbies for advice. They've steered him in particularly useful ways when it comes to one critical need: a bathroom. Hidalgo says he knew the city has public restrooms and that some hotels even offer a taxi concierge. But the sage advice? "Everybody else tells you to get a big bottle and hold it."

Hidalgo chose to be a cab driver so he could earn cash while freeing his mind so he can work on a book. Before this gig, Hidalgo attempted to travel around the world on $7,777.

But for now, he has to deal with unruly customers. "One of my early fares yelled at me for not knowing SoHo," Hidalgo says. He told her, "I'm very, very frustrated and nervous."

>> BONUS: What's your scariest first day on the job? Share your story on the BPP blog.