Accessibility links
Lyrical Alchemist Al Young Combining Poetry, Blues In honor of National Poetry Month, Farai Chideya talks with Al Young, California's Poet Laureate, about the art and joys of poetry. His latest book, Something About the Blues, includes a CD of Young reading his works, often with jazz accompaniment.

In honor of National Poetry Month, Farai Chideya talks with Al Young, California's Poet Laureate, about the art and joys of poetry. His latest book, Something About the Blues, includes a CD of Young reading his works, often with jazz accompaniment.

I'm Farai Chideya, and this is News & Notes. April is National Poetry Month. To help us celebrate, we invited California's Poet Laureate, Al Young, to NPR West to talk more about the art and the joys of poetry. His latest book is called "Something About the Blues: An Unlikely Collection of Poetry." It's unlikely in part because it includes a CD of him reading his works, often with jazz and blues accompaniment. Mr. Young, welcome.

CHIDEYA: You can tell when you listen to this CD that you like what you do.

CHIDEYA: Yeah. What do you like specifically about reading your work to an audience that makes it different, perhaps, from writing it for the page?

Mr. YOUNG: It's like playing music to an audience. To play the music and not feel the responsive vibrations, something coming back, is meaningless to me. But what happens in a live context when you are reciting or reading your poetry, it's only partially complete when you're reading it. It's completed when it's received. And poetry's very much like music. It's vibration and frequency. And it affects us in ways that we don't altogether understand. But we know it's happening.

CHIDEYA: What kind of inspiration did it take to make you into a poet? Who did you read? When did you start reading, or did someone read to you as a child that made you love poetry?

Mr. YOUNG: I started reading at the age of three, and I like to think that it's because of my parents, who were working-class people, who only had - both my mother and father only graduated from the eighth grade. So that they read, and they read a lot. And put their arms around me while they read. And I'm convinced that that has a lot to do with getting you to understand how to read. I would look at their mouths and I'd look at the page, and somehow, I figured it out. Then I tortured everybody by reading every sign, everything, which I still do.

CHIDEYA: So if you had to name a few other people, and I'm sure there'd be a long list. But just one or two people who you love.

CHIDEYA: Some of those names...

CHIDEYA: Some of these names I know and some I don't. And I think there are a lot of people like me out there, who like poetry, but they don't necessarily know - they don't have a long history with poetry.

CHIDEYA: Are you afraid that poetry is still viewed as very ivory tower for some people, or do you think, for example. The Spoken Word movement has brought more people into the fold, or maybe a little bit of both?

Mr. YOUNG: I think the Spoken Word movement has brought more people into the fold. Modernism is what we're not talking about here, which is the culprit. When Mr. Eliot and Mr. Pound devised modernism for Americans - curious that they should both be ex-patriots - they wrote in such a way that a lot of people didn't find poetry accessible. And poetry has always been popular with the people. So that poetry took refuge in colleges and universities, where it had to be explained. And that's where it remains today. And our poets go to college to learn how to write poetry. And there's a built-in problem with that, in that erudition and book learning is extolled as one of the high achievements of a poet. And it can get in the way of one's poetry, because I think that experience should be the first thing on your list to pay attention to.

So that modernism split when that happened. It split into the kind of academic, arcane, mandarin modernism, you know, try and figure this out. And it went into another vein, which was populous modernism. People like Marianne Moore, or Vachel Lindsay, or Carl Sandberg, or Langston Hughes, who used modernist techniques. OK, we're not going to rhyme, we're not going to necessarily have a regular beat. But we're going to write stuff that you can understand. So that's the branch that I was baptized in.

CHIDEYA: I want to talk about some of your work. One of the poems in the book that's also on the CD, is called "Conjugal Visits."

CHIDEYA: It's just so real.

Mr. YOUNG: It's based on something that was real.

CHIDEYA: Tell me about it.

Mr. YOUNG: I was teaching in a program called Community Studies, which was an interdisciplinary program, work-study program. You'd go to school for a while, and then you'd go out and work, and then you'd come back and write about it. And there was a woman enrolled in one of my classes who had four kids, and a husband in San Quentin. Her third husband, by whom she had no kids. This was in the 1980s, when San Quentin was experimenting with conjugal visits. She'd say, Mr. Young, I won't be in class because it's conjugal visiting day at the 'Q'. And so I finally ask her about it. And her body language was of two kinds. She was smiling and obviously joyous when she talked about how it was to go see her husband once a month.

And then her body language changed and she got very severe, and she sat up in her seat across from my desk, and she said, and when I get back to my - to Santa Cruz, and I'm trying to do my schoolwork and take care of my kids, do my job, he can't mess with me because he's locked up in the joint. And this kind of thing. So she had obviously solved her problems. She had her man, but you know, she didn't have to put up with him all the time. But the subtext of it is about our society's policy of just warehousing people, so it's a matter of priorities.

CHIDEYA: In your work as not just a poet but as a teacher, what's your mission?

Mr. YOUNG: To remind people that we are spirit, we are essentially divine. That's been really obscured in the 20th century with so much slaughter and so much murder and homicide, a lot of it sanctioned by governments. So that we forget that we are divine. I think the ancients understood. Our ancestors understood this better than we do.

CHIDEYA: It strikes me that your politics are probably somewhat different from the man who granted you the Poet Laureate position, Governor Schwarzenegger.

CHIDEYA: Who has called your ability to inspire something that really influenced your position. But how do you deal with obviously being someone who's very politically conscious and also operating in this world of arts and letters and in this world, this sort of quasi-governmental world, because that is part of your appointment, to be this ambassador for the state on some level?

Mr. YOUNG: Not only for the state, but the State Department still sends me out abroad to represent the country. And I speak my mind, but they still send me out. I don't know how one reconciles this. I think you have to be true to yourself, and I always am. And in my initial interview with the governor, I stated my politics. And he understood it. And I didn't think he was going to appoint me, but he did anyway. So obviously something is getting across that's useful.

CHIDEYA: I wonder if you could read a poem for us.

Mr. YOUNG: I would love to.

CHIDEYA: But I'm sure that there's something else that you want to share with us. You have your poems about California, poems about the blues.

Mr. YOUNG: I've got one. The once called "Who I Am in Twilight." And it's a poem that is actually emblazoned on the sidewalk. And it's set in stone, as it were, on something called "Poetry Walk" in Berkeley, California. They put down on sidewalk, Addison Street, about a hundred poets', I think, work. So it's fun to go over there and see how posterity works, because always somebody has dropped some pizza on it, mashed out a cigarette on it, or something like that.

Mr. YOUNG: So don't live for posterity, live for now. But here it is. "Who I am in Twilight."

CHIDEYA: Al Young, thank you so much.

CHIDEYA: California Poet Laureate Al Young. His latest book is called "Something About the Blues: An Unlikely Collection of Poetry." 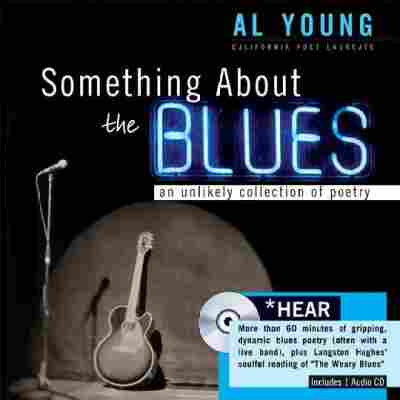 Something About the Blues

An Unlikely Collection of Poetry