Accessibility links
Student Achieves Inside, Outside the Classroom Davon Fleming is a tenth-grader at Northwestern High, a struggling school in Baltimore. Despite the difficult environment he manages to do well, but his real passion is singing. He gets his strength from his music, his family and his church.

Listen
Student Achieves Inside, Outside the Classroom

As the federal No Child Left Behind law comes up for renewal, NPR visits Northwestern High School in Baltimore, which has been failing testing requirements for years. Over the 2006-07 school year, we examine its struggle to meet the standards set down by the law.

Go to the series overview. 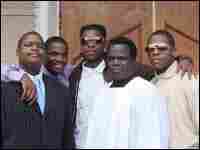 Baltimore's Northwestern High School has had some success in improving attendance and test scores, but students still score well below state and federal standards.

But Davon Fleming, a cheerful sophomore with a passion for singing, is a standout for his performance both in and out of school.

Despite his talent and stellar grades, Fleming wasn't accepted into the Baltimore School for the Arts. But he has no regrets.

"I was kind of heartbroken, but I have to move on 'cause life goes on," he says. "But I really would stay at Northwestern because I love Northwestern."

Fleming gets much of his strength from home.

He and his family spend Sundays at the Beth El Temple Church of Christ, a Pentecostal church near the high school. His father, Reggie Fleming is a deacon and Davon sings in the choir.

The service is a mix of rocking good music, speaking in tongues and high-powered preaching.

Back at Northwestern, Fleming sits in geometry class, where two young men are disrupting the teacher. He tries to help out by reading the objective out loud.

His journalism teacher, Amy Ensign says that Fleming is learning beyond academics; he's learning how to help other people.

Davon's father, Reggie Fleming, used to work for the Baltimore school system. He's watched his neighborhood high school lose its reputation as a good school, and then struggle to regain it.

Things are on the upswing now. That's why Reggie Fleming wants to keep his son at Northwestern, he says.

"Sometime you can't run from problems," he says. "You've got to attack it, and try to change things. And Davon has that attitude. Davon can change the atmosphere."

This is part seven in a series about Northwestern High School in Baltimore as it struggles to comply with the federal No Child Left Behind law.