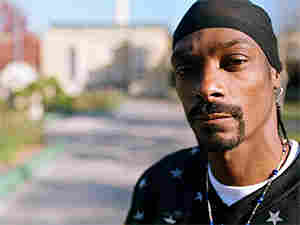 Snoop Dogg's willingness to have fun carries Ego Trippin' into the popular consciousness. Courtesy of the artist hide caption

The title of Snoop Dogg's modestly enjoyable ninth studio record is Ego Trippin'. This name carries the implication, at least in the age of Kanye West, that an established artist of Snoop's caliber can make some brave steps without losing his audience. And he does make some unexpected ones, covering the '80s funk band The Time on "The Cool" and throwing a shout-out to Johnny Cash over the country-fried "My Medicine."

Even the lead-off single "Sensual Seduction" — which appears on the album in an inferior, more explicit version as "Sexual Eruption" — is an unexpected pop-radio maneuver. The hit track, inspired by producer Shawty Redd's underground strip-club anthem "Drifter," features Snoop singing in auto-tune with typical charisma and humor.

For every trend-hopping indulgence that works — the snap-rap biting "Life Of Da Party" or the cheesy fun of "Deez Hollywood Nights" — another doesn't; Snoop's decision to allow a generic bottle-tapping Neptunes beat and crooned hook onto a record in 2008 was perhaps ill-considered. This oddball approach hits as much as it misses, but luckily, new jack swing pioneer Teddy Riley and veteran rap producer DJ Quik lend the album a firm consistency between each hit-or-miss "experiment."

This isn't Snoop Dogg's best record, and it can't be called adventurous, considering that rap has already incorporated everything from country to trance music over the last few years. But, as in much of his output, his personality and willingness to have fun in a genre reputed for serious posturing will carry yet another Snoop album into the popular consciousness.