Accessibility links
Tough-Talking Putin Crafted Image His Way When he steps down as Russian president next week, Vladimir Putin will leave with approval ratings most leaders can only dream about. One of the secrets to his success comes from a carefully crafted image as the country's tough-guy-in-charge. 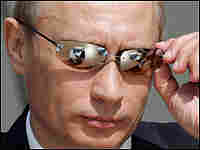 Since his days in the KGB, Russian President Vladimir Putin has meticulously crafted his image as a tough-talking man-in-charge. Mladen Antonov/EPA/Corbis hide caption 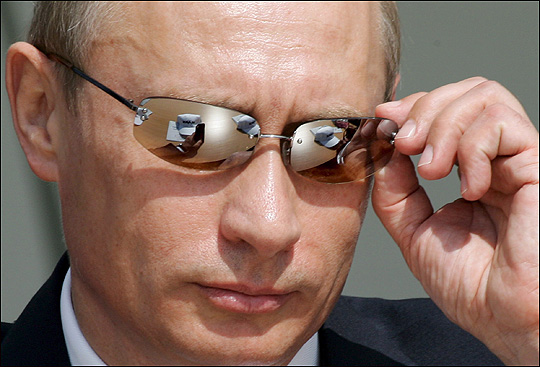 Since his days in the KGB, Russian President Vladimir Putin has meticulously crafted his image as a tough-talking man-in-charge.

The Kremlin has worked hard to build Putin's public image as Russia's virile "national leader" whose authority extends beyond his presidency.

In 2002, a pop band called Singing Together released a song titled "I Want Someone Like Putin" with the following lyrics:

Listen to "I Want Someone Like Putin" by Singing Together.

In 2007, Putin was photographed bare-chested during a vacation in Siberia with Monaco's Prince Albert. And during a news conference in April 2008, Putin appeared pleased while dismissing rumors he had secretly divorced his wife and planned to marry an Olympic gymnast.

The Kremlin has also been sensitive about possible negative images. In 2003, rumors circulated that the authorities suspected a deliberate attempt by Hollywood to mock Putin by making an animated character resemble him: Dobby the house elf, from the film Harry Potter and the Chamber of Secrets. Russian media jumped on the news by loudly debating the resemblance. 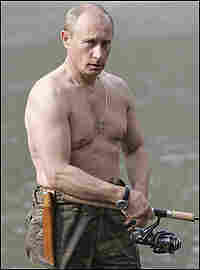 Putin stripped off his shirt for the cameras while vacationing in the Siberian mountains last year, prompting a squall of gossip from critics and setting admirers' hearts aflutter. Dmitry Astakhov/AP Photo/RIA-Novosti hide caption 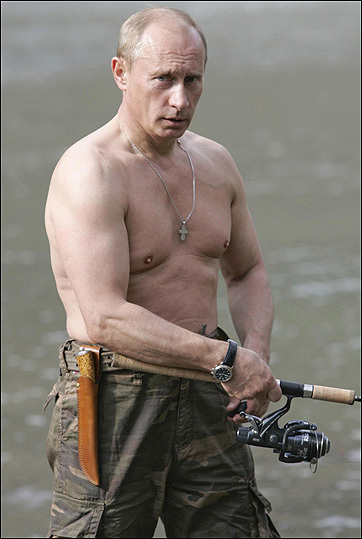 Putin stripped off his shirt for the cameras while vacationing in the Siberian mountains last year, prompting a squall of gossip from critics and setting admirers' hearts aflutter. 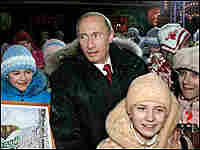 He will step down as president with an 80 percent approval rating. In 2006, he met with children visiting the Kremlin's ice skating rink in Red Square. Mikhail Klimentyev/ITAR-TASS/Corbis hide caption 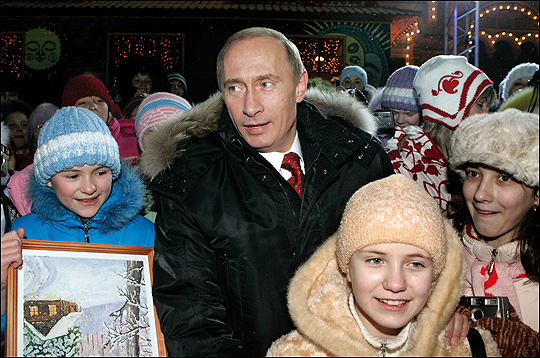 He will step down as president with an 80 percent approval rating. In 2006, he met with children visiting the Kremlin's ice skating rink in Red Square.

Few people had heard of Vladimir Putin when Russia's then-President Boris Yeltsin appointed him prime minister in 1999. But the stern-faced former KGB officer triggered a love affair with the Russian population — by starting a popular second war in Chechnya later that year.

Soon after hostilities began, the man who later became president surprised the country with the first of what became known as "Putinisms." He issued a threat to Chechen rebels using slang terms usually heard only in Russia's notoriously tough prisons.

"If they're in the airport," Putin said, "we'll kill them there ... and excuse me, but if we find them in the toilet, we'll exterminate them in their outhouses."

When Putin steps down as Russia's president next week, he will leave with approval ratings most leaders can only dream about. More than 80 percent of Russians say he has done a good job in office. His famous tough talk and outbursts might appear crude to foreigners — and even to many Russians — but they're essential to his carefully controlled public image, projected by a highly talented performer.

A Way With Words

Since he was first elected president, in 2000, Putin has systematically rolled back media freedom in Russia. Yet he's also forged a love-hate relationship with journalists.

When Putin appears in front of more than 1,000 reporters during his annual news conferences, he owns the room, keeping reporters fascinated for hours by alternating between threats, jokes and flirtation.

One journalist said in 2006 that she was speaking for all blond women when she asked why Putin looked so fit and attractive. His answer was that he doesn't drink and plays plenty of sports. He then asked her to convey his greetings to all blond women.

Putin has often lost his temper in public. During a 2002 news conference in Brussels, Belgium, the president responded to a question that angered him by inviting a reporter to come to Moscow to be circumcised.

"We have specialists in this question, as well," Putin said. "I'll recommend that he carry out the operation in such a way that nothing will grow back."

Even some of Putin's biggest critics say he knows how to work an audience. Boris Nemtsov, a former deputy prime minister of Russia, says Putin learned how to craft his image in a special educational program at a school for KGB officers.

"He studied at KGB school ... how to attract people, how to be comfortable. ... And I believe that he studied well," Nemtsov says.

Natalia Muravieva, rector of Moscow's Academy of Communications and Information, says Putin is a highly dynamic politician whose speeches are intricately crafted.

"Putin uses a lot of repetition that builds to a crescendo," Muravieva says. "And his widely reported aphorisms are like gems. They're few and far between, and everyone remembers them."

Russians won't necessarily be deprived of such gems just because Putin's term as president is expiring. He's used his tremendous popularity to retain much of his power.

His self-appointed successor, Dimitri Medvedev, who was recently elected president and takes office May 7, has said Putin will be prime minister and head of the country's biggest political party.

Both platforms will give Putin plenty of opportunity to create new Putinisms.

'Putinisms': From the Mouth of a President 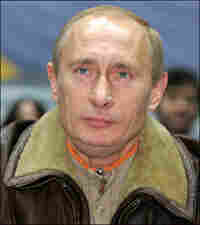 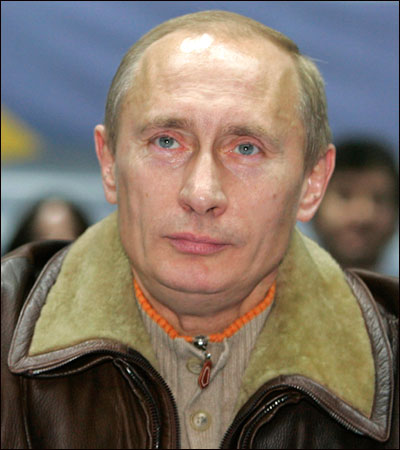 A sampling of some of Russian President Vladimir Putin's eyebrow-raising comments and actions over the years:

-- In 2000, CNN's Larry King asked Putin what had happened to cause the Kursk nuclear submarine accident, which killed 118 crew members in the Barents Sea. Putin made light of the question, answering, "It sank." During the failed rescue operation, Russia had turned down offers of help from other countries, and Putin was criticized for refusing to cut short a vacation.

-- Meeting reporters in 2003, Putin said jailed Yukos oil company chairman Mikhail Khodorkovsky's offer to pay back taxes from the 1990s had come too late. "One must always obey the law," Putin said, "and not only when you're grabbed in a certain place."

-- In 2005, Putin met with American businessmen in Moscow, among them Robert Kraft, owner of the New England Patriots football team, which had recently won the Super Bowl. When Kraft showed Putin his diamond-encrusted championship ring, Putin surprised his guests by trying on the ring, slipping it into his pocket and leaving. Kraft later said he had given the ring to Putin as a gift and token of respect.

-- During a joint news conference with Israeli Prime Minister Ehud Olmert in 2006, a Russian journalist overheard Putin talking about Israeli President Moshe Katsav, who had been accused of multiple rapes. "What a mighty man he turns out to be!" Putin said. "He raped 10 women; I'd never have expected that from him. He surprised us all — we all envy him!" The Kremlin later confirmed Putin had made the comments. During a call-in television program, Putin criticized reporters for "eavesdropping" on his conversation with Olmert, saying it was "unseemly."

-- When asked by a journalist in 2006 about Russia's possible support for sanctions against Iran, Putin denied accusations that Tehran was developing nuclear weapons, saying, "If a grandmother had certain reproductive organs, she would be a grandfather."

-- During a summit of the Group of Eight leading industrialized countries in Germany in 2007, Putin attacked the United States and Europe and described himself as the world's only "pure democrat." "After the death of Mahatma Gandhi," he said, "there's no one to talk to." Putin rejected criticism that he has ended democracy and reinstituted authoritarianism in Russia, accusing European countries of "killing demonstrators in the streets."

-- During a news conference in 2008, Putin criticized Western elections observers by quoting a well-known line from a popular television crime drama. "They're trying to teach us something!" he said. "Well, let them teach their wives how to make cabbage soup!"