Accessibility links
Young Pianist Ready to Be Jazz Ambassador Composer and pianist Robert Glasper grew up listening to his mother sing in churches and night clubs in Houston. On In My Element, Glasper delivers his brand of jazz to a hip-hop generation. 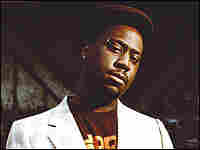 Glasper's mother died three years ago. He celebrated her life in a poignant requiem called "Tribute," which he performed as an accompaniment to her eulogy.

Read more about the song and listen. 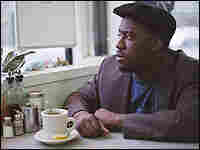 Composer and pianist Robert Glasper says that growing up with a mother who sang helps him to identify real artistry and musical passion when he sees it. Jessica Chornesky hide caption

Composer and pianist Robert Glasper has recorded with artists ranging from Roy Hargrove to Carly Simon, and he often collaborates with hip-hop stars like Mos Def and Q-Tip.

But on his newest album, In My Element, 28-year-old Glasper delivers his own brand of jazz to a generation largely composed of listeners only exposed to hip-hop.

But the music and technique can't be described simply as jazz. He says growing up listening to his mother sing in Houston, Texas, helped shape his appreciation for various musical forms such as jazz, rock, and hip-hop that he now incorporates into his own work.

On Saturdays and Sundays, Glasper's mother performed in church. But she put food on the table by singing piano jazz and Broadway tunes at night on Houston's club circuit. Not wanting to leave him at home with the baby sitter, Glasper's mother brought him along.

"Anything you can think of, she sung it and listened to it and loved it," says Glasper. "So that's kind of where I get my appetite from."

But Glasper doesn't consider the lack of a musical label to be a problem.

"That means I'm doing something good," he says. "So that means 20 years from now, people will be like, 'Yes, play this, like, Glasper style.'"

The Undying Spirit of the Dash 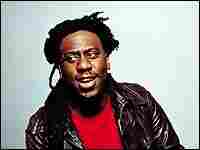 Funerals celebrate life as much as they mourn the departed, and Robert Glasper's poignant requiem "Tribute" — assembled in honor of his mother, who died three years ago — makes no secret of that. Glasper and his bandmates initiate a plaintive piano-trio hymn that soon underscores Rev. Joe Ratliff's poetic eulogy. Ratliff's baritone evokes all the radiant grandeur associated with an Easter-morning church service, as he unravels a compassionate message about how human shortcomings allow us to recognize God's complex perfection.

As the song builds momentum alongside the applause from Houston, Texas' Brentwood Baptist Church congregation, Ratliff focuses directly on Glasper's mother, recalling her as having "a smile in the midst of her pain."

Although the music retains its melancholic specter, it never gets maudlin. Instead, it deftly sweeps Ratliff's honorific lines: "Alpha 60/Omega 2004, dash," he says. "But neither of these dates are what brings us here today. It's the dash in between the two... Not that she was born. Not that she died. But because of the dash, she lived! I mean, she lived! I mean, her dash is vibrant!" At that point, the song transforms fully into billowy swing that doesn't quite resolve. Instead, it dissipates beautifully, insinuating the undying spirit of the dash.