Accessibility links
Marie Digby, YouTubing to Pop Stardom Unsure of what was happening with her record-label relationship, the singer generated her own publicity by posting acoustic covers of pop hits on YouTube. Now, she's finally released her debut album of original songs.

Marie Digby plays acoustic versions of her most popular songs in the NPR West studio: 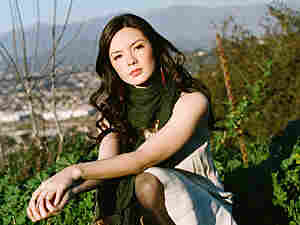 Marie Digby has been called the girl next door with a guitar. Most of her fans also know that she has a computer.

Unsure of what was happening with her record-label relationship, Digby broke onto the national stage in 2007 using YouTube, where she posted homemade videos of herself covering major pop hits by Rihanna, Britney Spears and even Linkin Park. To date, her YouTube videos, largely made in her parents' living room, have generated more than 22 million views.

"Yeah, and sometimes they were in my bathroom," she says.

Her debut album, Unfold, hit shelves last month, and it's filled with original pop songs built around Digby's guitar riffs. She spoke with Scott Simon about the unfolding of Unfold — starting with her do-it-yourself acoustic covers.

"It just has to have a great melody," she says. "Doesn't matter what genre it is — it could be opera, it could be rap, it could be country. Whatever it is, as long as it has a beautiful melody, I can break it down on guitar and make it sound good."