Accessibility links
Zooey Deschanel and M. Ward as She & Him The indie movie princess and folk indie prince have joined forces under a simple moniker. Their debut album, which feels like it came from another era, has already landed the duo on multiple critics' Best of 2008 lists.

Zooey Deschanel and M. Ward as She & Him

Zooey Deschanel and M. Ward as She & Him

Why Do You Let Me Stay Here? 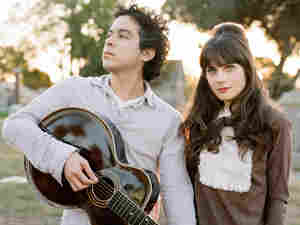 Zooey Deschanel and M. Ward sometimes complete one another's sentences. Courtesy of She and Him hide caption

toggle caption
Courtesy of She and Him

Zooey Deschanel has always been an anachronistic sort of gal. At age 8, when she wrote her first song, she was "really into the early 1900s."

"I think it was called 'I'm Having Fun at the Fair,'" she tells NPR's Alex Cohen, her big blue eyes peering out beneath bangs that have inspired fashion columns.

"Did it have words?" asks the other half of She & Him. M. (short for Matt) Ward is sitting next to her at the Vista theater in Hollywood, where they'll perform that night.

Twenty years later, she's still toying with the past. Volume One, the debut album She & Him released earlier this year feels like it came from another era. The original songs manage to simultaneously exude Linda Ronstadt, the Beach Boys and the Ronettes — music that Deschanel and Ward listened to as kids. They've also included a tiki-style tribute to the Fab Four.

Until recently, composing was just a hobby for Deschanel — better known as the beautiful actress from the films All the Real Girls and Elf.

"I'd be working here or there and I would just go home and be writing songs and recording them," she says. "It was just sort of my way of relaxing."

Then she met folk-indie-prince Ward.

In 2006, while making the film The Go Getter, director Martin Hynes asked the pair to work together on a duet for the soundtrack. Something just clicked.

"I knew Zooey's music from Elf," recalls Ward, referring to the songs her shop-clerk character sang in the Christmas comedy starring Will Ferrell. "And I loved the voice. I thought that maybe there was a Zooey Deschanel record."

She assured him there was no such thing — but let it slip that her home was filled with demo tapes. Turning them over, however, was mildly terrifying.

"It's a very personal experience writing music," she says softly. "...It's hard the first time you say, 'I like this, do you think this is OK?' That's very scary."

It was more than OK. Ward says it was one of the best demos he'd ever heard.

"I just loved the songs and it's really rare that you find good songs, it's as simple as that," he says. The vocal arrangements, in particular, blew him away. "If I could do that on my four-track tapes, I would have done that a long time ago."

Ward — who in the past had worked with talented female vocalists such as Norah Jones, Cat Power and Neko Case — had found his musical soul mate. He persuaded Deschanel to form a band with him and record an album. Even though their names both have star power, they opted for the simple moniker She & Him.

"We both talked about liking the idea of a name that is sort of anonymous and humble," says Deschanel. "I always liked the name The Band because it's not about being like the star of anything, it's about the music."

And by music, she means "music" that hasn't been thoroughly altered by technology.

"I just like music that sounds like music," she says. "Not like machines and computers and things that you design to make things sound slick and perfect."

She & Him have sold out everywhere they've played, but Deschanel isn't giving up acting anytime soon. She recently lent her voice to The Simpsons and has several films coming out this year, including the one that launched her collaboration with Ward.

The two say they plan to put out a follow-up record to Volume One, but they aren't quite sure what to call it. Maybe Volume Two?

She agrees, smiling coyly back at Him.

Album
Volume One
Artist
She & Him
Label
Merge
Released
2008