Accessibility links
Racetrack Attendance Plummeting More that 150,000 people are expected to pack the grandstands Saturday to watch this year's Kentucky Derby. But while all those people make it one of sports' best-attended events, overall attendance at horse racetracks has plummeted. Sports commentator Stefan Fatsis talks with Robert Siegel about the state of horse racing.

More that 150,000 people are expected to pack the grandstands Saturday to watch this year's Kentucky Derby. But while all those people make it one of sports' best-attended events, overall attendance at horse racetracks has plummeted. Sports commentator Stefan Fatsis talks with Robert Siegel about the state of horse racing.

One of the best-attended events on the American sports calendar occurs tomorrow at Churchill Downs in Louisville, Kentucky.

The expected crowds will gather for the 134th running of the Kentucky Derby. The derby is the first leg of horse racing's Triple Crown, and for most fans it will be the first and only horse race they'll watch all year.

Joining me as he does most Fridays is our regular sports commentator Stefan Fatsis.

SIEGEL: It's a field of 20 horses at the derby, and Big Brown, I gather, is the favorite but not by many lengths.

FATSIS: No, it's an unpredictable field. And one reason is that some of the horses will have run mostly on synthetic tracks up until now, which are mandatory in California because they're supposed to be easier on the horses.

But Churchill Downs is dirt, and horses respond differently to the two surfaces. Plus, the derby is always tough because these three-year-olds haven't raced at this length, one and a quarter miles, and 20 horses is just a big field, it means more things can go wrong. Big Brown, who last I looked, was the favorite at 3 - 1 has raced just three times, and no derby winner has raced that little and won since 1915. But all three of his races were on dirt and he won them all handily. The other favorites are Colonel John, 4 - 1; Pyro, 6 - 1; and there's a filly in the field, Eight Bells, who was listed at 20 - 1.

SIEGEL: Uhm-hmm. There will be more than 150,000 people, we expect, watching the race in person, that's not only big, that is an anomaly.

FATSIS: In horse racing, it sure is. Attendance has plummeted to the point that many tracks have closed. There's a good overview of the state of the industry in the magazine, Sports Business Journal this week, which points out that industry groups stopped releasing nationwide attendance figures 15 years ago. Even Churchill Downs angst(ph) stopped giving out those numbers for its tracks last year. Big events like the Triple Crown Races or the Santa Anita Derby in California or the Wood Memorial in New York still do attract a big crowd, but if you go to any track, on any other day, there aren't that many rail birds left, and the ones that are there are rarely under the age of 50.

SIEGEL: But, you can hear the argument made, that even with the extinction of the rail bird, a lot of money is being wagered on horse racing.

FATSIS: Yeah, that's true. Horse racing's handle, the total amount bet, began climbing in the early 1990s, when you started getting simulcasting for races from around the country and then later, online betting. More races to bet on, more money to bet. There's an interesting piece on the Web site Slate today, about how it's not only easier to bet if you're not at the track, but it's also more economical for big betters because they get rebates on a track's normal 20 percent commission.

Even so, the total handle has flattened at around $15 billion a year in recent years, and industry executives are pretty gloomy about growth prospects.

SIEGEL: And the remedies they turn to, one of them I guess, is slot machines at the tracks.

FATSIS: Some places have tried that, they're looking at simpler ways to bet. Shrinking the sport even more and focusing on destination locales like Saratoga in upstate New York, or Del Mar in Southern California, or Keeneland in Kentucky which offer short seasons and quality races, and do well at the gate end at the window.

And then, even more emphasis on the glamour events, like the Triple Crown and the Breeder's Cup, or the Kentucky Derby's TV audience while it's nowhere near what it was in the 1970s, is up the last few years and NBC has expanded coverage this year, and if you get a Triple Crown possibility like Smarty Jones in 2004, or a dramatic story like Barbaro in 2006, the sport gets a lot of attention and maybe a few new fans.

SIEGEL: And even if it has business problems, we're talking about a sport, is the sport of kings, sometimes literally?

FATSIS: Literally. You know, the derby may be the most prestigious horse race in the world, but the Dubai World Cup is the richest race. And the ruler of Dubai is one of the biggest spenders in the sport. He drops tens of millions in dollars on foals, it's driven up the price of young horses with impressive bloodlines, and that creates pressure to breed horses who can win.

My colleague Jon Weinbach writes in the Wall Street Journal today that all 20 entries in tomorrow's derby are related to a horse named Native Dancer who never won the race himself and died in 1967. Breeders want a sure thing, and bloodlines help offer that. But there are risks. With so much in-breeding, fewer stallions are producing foals, and often they're producing fragile animals.

SIEGEL: So, it's a small world if you're a thoroughbred?

SIEGEL: Stefan, have a good weekend.

FATSIS: Thank you, Robert. You too.

SIEGEL: Stefan Fatsis of the Wall Street Journal, who talks with us on Fridays about sports and the business of sports.

What's Wrong with the Kentucky Derby?

What's Wrong with the Kentucky Derby? 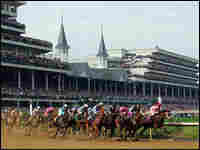 Horses round the first turn during the 133rd Kentucky Derby on May 5, 2007, at Churchill Downs in Louisville, Ky. Jamie Squire/Getty Images hide caption 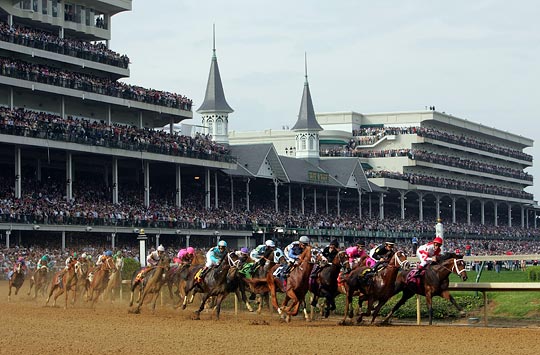 Horses round the first turn during the 133rd Kentucky Derby on May 5, 2007, at Churchill Downs in Louisville, Ky.

Did you ever talk about Nutsy Fagan around your neighborhood? When somebody acted, well, nutsy, we said, "He's as nutsy as Nutsy Fagan."

There's some question about who exactly the Nutsy Fagan was. He might have been a guy in 19th century New York who liked to join funeral processions under the impression they were parades. And, of course, we weren't so considerate then. A guy was fat, we called him "fats"; a guy was nutsy — hey, we called him "nutsy."

Anyway, I always think of Nutsy Fagan when I see how some sports handle their schedules. For example, the most important NASCAR race is the Daytona 500 — the first big race of the year. It would be as if the NFL started with the Super Bowl and worked backward from there.

The two most different surfaces in tennis are clay and grass, but as soon as the French clay championships end, they immediately switch to grass and start Wimbledon only two weeks later. Only Nutsy Fagan could have dreamed that up.

College football teams finish their regular schedule in November, maybe early December. Then the two championship contenders take a whole month off before meeting for the national title in January.

Nothing, though, is so dopey as the way horse racing conducts its premier event, the Kentucky Derby, which, of course, is run this Saturday — by custom, the first Saturday in May. In how many details can they screw it up? Let me count the ways.

First of all, the Derby is run at a mile and a quarter, which is a long distance for young 3-years-olds to cover. Thoroughbreds race a lot less now, and they're bred more for speed. As if running the mile and a quarter early in May isn't asking too much, the second leg of the Triple Crown, the Preakness, will be conducted just two weeks later. Not only that: The Preakness is shorter than the Derby. So, they run the longer race first, then rush into the second, shorter one.

Then, just three weeks later comes the Triple Crown finale, the Belmont. That means the three races are jammed together in only five weeks. Big Brown, the probable Derby favorite, has so far only raced three times in his whole life. The Belmont is run at a mile and a half. This is a distance virtually no race horse in America runs anymore — except for the Belmont.

But to make it sound special rather than idiotic, a mile and a half is always called a "classic distance," which is true enough, especially if you think classic means out of fashion. The Belmont is a classic the way the set shot in basketball is. But, of course, nobody in basketball is dumb enough to use the set shot anymore just because it's a classic.

Moreover, at the Derby, to start the Triple Crown off, they let 20 horses run, which is far too many. So the most important race in America is more determined by luck than skill as the thundering herd blasts out of the starting gates. No wonder no colt ever wins the Triple Crown anymore.

So Saturday, when the band starts playing "My Old Kentucky Home" and the thoroughbred stampede comes onto the track, I'll raise my mint julep and say, "You did it again, Nutsy Fagan!"