Accessibility links
What I Learned on the Way to 'Graduation' All Things Considered staffer Cory Turner went to film school, paid his dues and finally sold a screenplay. So why — with his movie ready for release — wasn't he happy?

Listen
What I Learned on the Way to 'Graduation' 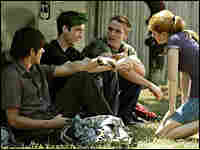 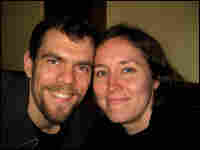 'Who'd Have Thought Corporate Could Be so Hot?'

Screenwriting is like pulling a heist. Instead of cracking a safe, you're trying to convince a Hollywood studio to finance a movie you probably hatched in the shower.

My heist began in 1998, when I graduated from college — and got into film school. I'd always dreamed of living in L.A. and writing movies. Rachel, my girlfriend, wanted us to go to D.C., where she'd always dreamed of working for a relief agency and seeing the world. My dream won.

I wrote Graduation in film school and graduated with 40 grand in fresh, green debt. That was in 2000. Soon I landed the perfect day job: reading gas meters, which freed up my afternoons to revise the script with my friend, Mike Mayer, who would later direct Graduation.

But I'm getting ahead of myself.

First came my marriage, in 2001, followed by tens of thousands of gas meters, and almost as many rejections from agents and managers who had read early drafts of the script.

Finally, in 2003, we finished the script and landed an agent who believed in it. She sent it all over town on a Wednesday. That night, Rachel and I waited for the phone to ring.

After a few hours, I turned on the TV and discovered that — that night — the Iraq war had officially begun. Suddenly, people had far more important things to do than read my little heist. Soon, my agent stopped calling.

By the winter of 2004, Rachel decided that she'd put off her own dream long enough. She found that relief job and made plans to start traveling. But she wanted me to go with her — which meant abandoning my failed script. I couldn't do it.

Then, believe it or not, the phone finally rang. A producer of one of that year's Best Picture Oscar nominees wanted to option Graduation.

I met my lawyer at his favorite restaurant, A Little Taste of Hoboken, and he slid the check across the table. I called Citibank just to hear them say, "Yes, Mr. Turner, your student loan has been paid in full." By August 2005, I was in Pittsburgh for the start of the Graduation shoot.

Rachel was in Kenya.

Since then, we've both had our adventures, though mostly apart.

Last year, we screened the finished movie for the cast and crew in L.A. Rachel had been in Sudan for months, and our marriage was one awkward phone call away from disaster.

That's when it hit me: After nine years, I'd actually gotten my movie made. But I wasn't happy. I'd become that idiot in every romantic comedy I hate, the guy who lands the girl of his dreams and then lets her get away.

This past October, I finally said goodbye to Los Angeles. Rachel and I moved to Washington. And tonight, we'll be sitting in a darkened theater in Minneapolis — the closest city where we're opening — and we're going to watch our movie.

Now, I'm no Hollywood big shot. And I'm no richer than I was when I started. But, like all the best movie heists, it's about love, not the money.