Accessibility links
March Maple Madness: A Sweet Time of Year At a wildlife sanctuary in Lincoln, Mass., maple syrup is still made the old-fashioned way, with hand-held drills and metal buckets. Betsy Block explains the ritual of maple sugaring and shares two ways to enjoy the liquid treasure. 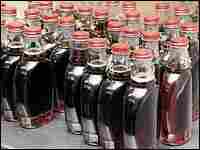 At Drumlin Farm Wildlife Sanctuary in Lincoln, Mass., the maple sap has started running. Trees at the sanctuary are expected to yield 22 gallons of syrup before the season ends in mid-April. Andrew Pockrose hide caption 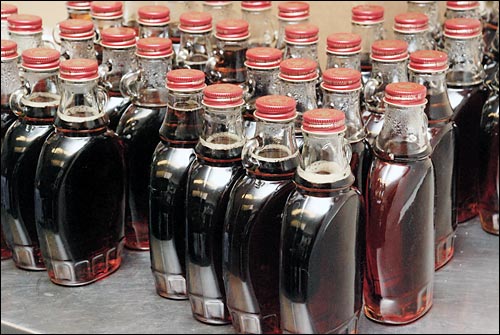 At Drumlin Farm Wildlife Sanctuary in Lincoln, Mass., the maple sap has started running. Trees at the sanctuary are expected to yield 22 gallons of syrup before the season ends in mid-April.

Recipes for maple-spiced nuts and fruits and maple-ginger glazed ribs. 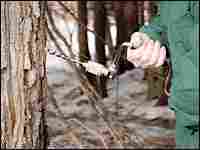 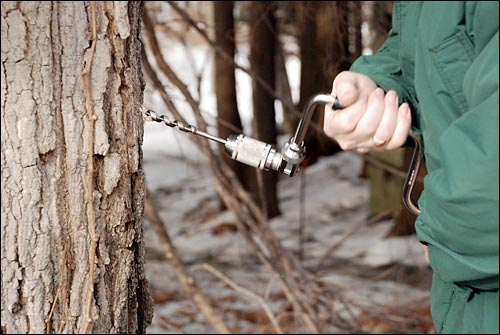 Hand-held drills are used to tap trees at Drumlin. 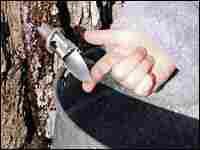 Tree sap run out of spiles, or spigots, that are hammered into the maple trees. Andrew Pockrose hide caption 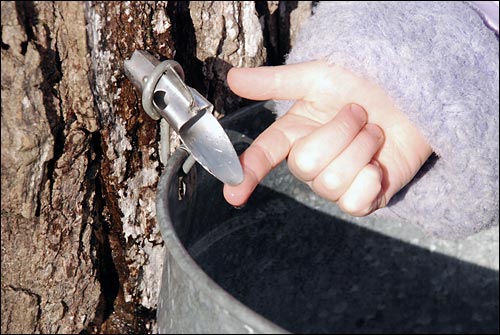 Tree sap run out of spiles, or spigots, that are hammered into the maple trees.

Betsy Block, a Boston-based freelance writer, is a regular contributor to Kitchen Window and the voice of the blog Mama Cooks. She is writing a book about kids, food, and the meaning of life (not necessarily in that order), which will be published by Algonquin Books.

It's a chilly March Monday at the beginning of Massachusetts Maple Month. And even though Drumlin Farm Wildlife Sanctuary in Lincoln, Mass., is closed, Roger Backman is hard at work tapping trees, bringing sap up to the kitchen, boiling it down and bottling it — a process known as maple sugaring.

The retired engineer is the volunteer in charge of the sanctuary's maple sugaring program. Help is available, but it is mostly a one-man operation. This year, Backman expects to bottle 22 gallons of syrup by the time the season ends in mid-April. Since it takes 40 gallons of sap to make one gallon of syrup, he will collect and boil quite a few buckets in the next month or so.

While large commercial operations now use plastic tubing, pipelines and even vacuum pumps, small-scale producers such as Backman still do it the old-fashioned way, with a hand-held drill, metal buckets and spiles, or spigots, hammered into the holes.

In the latter case, sap drips out slowly but steadily (although if the temperature drops too low, sap will stop flowing until it warms up again), filling up about one-third of a bucket, or a half-gallon, in a day. Maple sugaring won't be rushed.

Hundreds of years ago, according to the Massachusetts Maple Producers Association (MMPA), maple sugar was more common than syrup because it was easier to store, and it was an important commodity for both native people and colonists. The Pilgrims learned about maple sugaring from Native Americans, who collected sap in containers made from hollowed-out birch bark or clay, then dropped hot stones in to evaporate some of the water. Another method was to let the sap freeze, leaving behind a sugar concentrate.

When the import tax on white cane sugar was removed at the end of the 19th century, cane sugar soon outsold maple sugar. But maple syrup was popular enough that many sugar makers just switched to making syrup. (Even so, they still call the process maple sugaring.)

A tree needs to be a minimum of 12 inches in diameter — which means it is at least 40 years old — before it is ready to be tapped. The grand old tree in front of us on a recent blustery afternoon is more than 200 years old and has two taps in it. Others have a couple dozen visible holes in them, but proper tapping doesn't harm the tree. Some New England trees have been tapped yearly for more than a century.

There are 100 buckets out awaiting maple sap at Drumlin Farm this year. Each day that the sap is running, Backman and a few sanctuary staff members gather the containers and pour the watery contents into holding tanks next to the wood-fired evaporator. Backman runs the evaporator once he has collected at least 50 gallons of sap. The reduced sap goes to the kitchen, where it is filtered and boiled down in large stainless steel pots until it is thick and well, syrupy — a process that takes a day.

Maple syrup comes in a variety of grades: Grade A light amber, Grade A medium amber, Grade A dark amber and Grade B. The A grades go from lighter and milder to darker and more robust, whereas Grade B, often referred to as cooking syrup, is usually considered too strong to be eaten plain. Producers have no control over which kind of syrup they'll get. The same trees can give off different grades from year to year, depending on the weather.

Although maple syrup can be produced anywhere you find maple trees and the right weather conditions, it is mainly a product of New England and eastern Canada. Syrup also can be made from birch, palm trees and even alder, hickory and black walnut. But the sap from these trees needs to be boiled down much more than maple sap to get syrup that is sufficiently sweet.

Almost any grade of maple syrup (except B) goes perfectly with waffles, French toast and pancakes. I like to drizzle it into oatmeal or yogurt. But maple syrup also can be turned into fantastic glazes for meats (especially pork ribs), and it can be used to turn nuts and dried fruits into something extra special.

My kids love maple syrup mostly because it is so sweet, but I love it for its distinctively woodsy flavor, which is why we always have not a bottle, but a jug in the fridge.

Unopened, syrup will last indefinitely, but once opened it should be refrigerated. If any harmless mold forms on the surface, the MMPA says simply bring the syrup to a slight boil, skim the surface and pour into a clean container. In my house, it never lasts long enough for mold to develop.

A Southern friend of ours says with a laugh that he prefers corn syrup and chemical-enriched "pancake syrup" to the real thing. But he and his family just moved to Boston from Atlanta a year ago. We're betting that by the time the sap stops running in April, he will have come around. 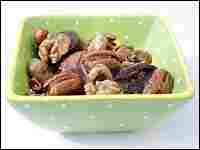 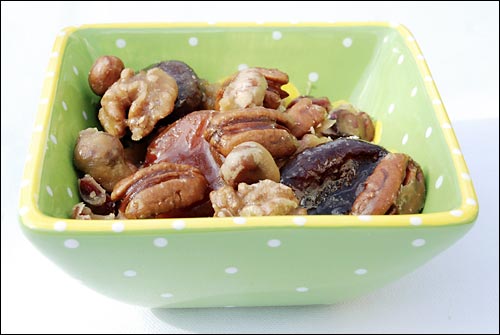 This recipe is adapted from The Art of American Indian Cooking by Yeffe Kimball and Jean Anderson (Lyons Press 1965). To add some spice to a dreary March day, I came up with the optional flavorings for this recipe. I used them all, and while my picky 5-year-old thought the nuts and fruits were "too spicy," everyone else liked them well enough that they were gone within a couple of days.

Place maple syrup, water, vanilla, salt, spices and juices/rind in a small saucepan and cook over medium heat, without stirring, until the syrup reaches the softball stage, 238 degrees on a candy thermometer. This should take 10 to 15 minutes.

Remove from heat, and drop handfuls of nuts into the hot syrup, turning gently with a spoon until evenly coated. With a slotted spoon, remove to a pan and cover with aluminum foil. Repeat until all the nuts are done. Do the same with the fruits, using tongs for bigger fruits such as apricots, and the same slotted spoon for small fruits such as dried cranberries. If the syrup begins to harden, heat just long enough to melt it.

Cool the nuts and fruits to room temperature. 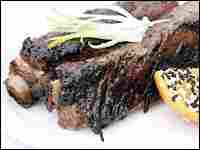 Serves 2 as a meal, 4 as an appetizer

Mix glaze ingredients together. Brush some of the mixture onto the ribs, and place them on a cooling rack on a foil-covered cookie sheet. Bake at 250 degrees for an hour and a half. Brush with the glaze two or three times during cooking.

Take the ribs out of the oven and let them cool for a few minutes, then cut into individual ribs (or two-rib pieces). Brush on more glaze, then cook on a grill for about 15 minutes over low-medium heat, turning frequently, basting more as desired.