Accessibility links
Congress, White House Clash on Hearing Rules President Bush says he will make Karl Rove and former counsel Harriet Miers available to testify — but not under oath — about the firing of eight U.S. attorneys. Sen. Patrick Leahy (D-VT) and others on the Judiciary Committee respond that the rules won't bring true accountability to the process. 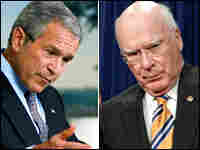 President Bush and Sen. Patrick Leahy agree that Deputy Chief of Staff Karl Rove and former White House Counsel Harriet Miers should speak to the Judiciary Committee. But they have differing views of how it should be done. Win McNamee/Mark Wilson/Getty Images hide caption

Latest Statements on the Firings

The White House and Congress squared off Tuesday over the dismissal of eight U.S. attorneys in 2006. The question is whether White House officials will testify voluntarily on their terms or under subpoena on Congress's terms.

The White House says it will make Karl Rove and former counsel Harriet Miers available to testify — but not under oath — about the firing of eight U.S. attorneys.

In a brief press appearance Tuesday afternoon, President Bush insisted that no one on his staff had done anything improper, including Attorney General Alberto Gonzales, who has taken the blame for what he acknowledged as "mistakes" in the way the events were handled.

"We will not go along with a partisan fishing expedition aimed at honorable public servants," Mr. Bush said.

But Sen. Patrick Leahy, chairman of the Senate Judiciary Committee, has said in response to the White House's offer that testimony from administration officials "should be on the record and under oath. That's the formula for true accountability." 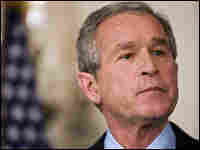 President Bush speaks to reporters at the White House March 20, 2007, about the controversy over the firing of federal prosecutors. Mandel Ngan/AFP/Getty Images hide caption

A Sampling of E-Mails

Read documents released by the Department of Justice to the House Judiciary Committee. 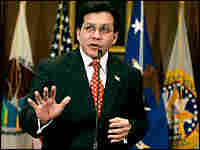 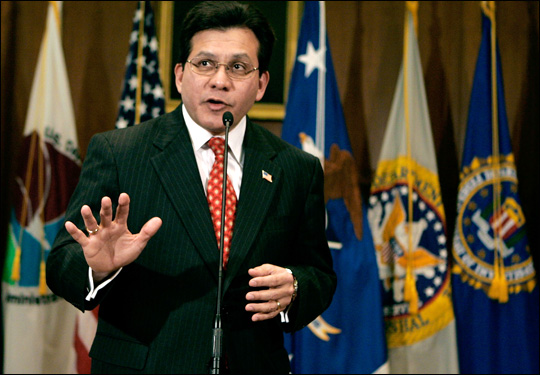 The struggle between the White House and Congress over the firings of eight U.S. attorneys intensified Tuesday. President Bush accused Democrats on Capitol Hill of playing partisan politics and said he would not allow his top aides to testify under oath about the firings.

The White House offered instead to allow presidential adviser Karl Rove, former White House counsel Harriet Miers and others to be interviewed in private by congressional committees.

Democrats quickly rejected the proposal. Senate Judiciary Committee Chairman Patrick Leahy said the "testimony should be on the record and under oath." The president said that would set a bad precedent and hurt his ability to get good advice. The president called his own proposal "reasonable" and said the White House would not go along with "partisan fishing expeditions."

But lawmakers say they still have many questions about the firings, despite the Justice Department's release Monday night of 3,000 pages of internal documents. Leahy, a Democrat from Vermont, complained about redactions, and said: "One of the many things I want to look at in Appropriations is how much they're spending on White-Out, because they're certainly not spending much on print. We're not getting a full answer."

Lawmakers continued to call for Gonzales to resign because of the way he handled the prosecutors' dismissals. Rep. Tom Tancredo of Colorado became the latest Republican to demand that the attorney general step down, saying he was disturbed by Gonzales' "repeated failure to enforce the law." Tancredo, who is seeking the Republican nomination for president, is among those who are expressing displeasure that the Justice Department has not pursued more illegal immigration cases.

President Bush said there's no indication that anybody did anything improper. He said Gonzales has his support, and the attorney general will be available to go to Capitol Hill to explain why the prosecutors were fired. The White House denied rumors that the president is looking for a replacement for Gonzales.

Meanwhile, congressional staffers sifted through the 3,000 pages of newly released documents. The e-mails and letters paint a picture of eight U.S. attorneys trying to make sense of their dismissals, as the Justice Department hunkered down to weather the fallout — and sometimes mocked the people who were fired. Running throughout the papers are concerns that prosecutors have not been pursuing enough illegal immigration cases, or that they failed to manage their offices effectively.

The papers include charts listing each of the fired attorneys, with notations about their "leadership skills" and performance evaluations.

For example, the charts say that Paul Charlton, the U.S. attorney in Arizona, exhibited "repeated instances of insubordination, actions taken contrary to instructions, and actions taken that were clearly unauthorized." The charts also said that he "worked outside of proper channels."

John McKay, the U.S. attorney in western Washington state, was noted for a "pattern of insubordination" and "poor judgment." Although another version of the same chart has someone crossing out the word "insubordination."

In separate assessments, marked "Sensitive/Personnel: Not for distribution PRIVACY ACT PROTECTED," the fired attorneys are also critiqued. For example, under Kevin Ryan, the U.S. attorney in Northern California, the document says: "The district has become one of the most fractured offices in the Nation" and "the problems here have been so significant that it has required multiple on-site visits."

The documents also show the administration's efforts to minimize the political fallout.

In a Jan. 30, 2007, e-mail, Kyle Sampson, who resigned last week as the attorney general's chief of staff, noted a Justice Department letter to Sen. Mark Pryor (D-AR) about the interim appointment of Tim Griffin to replace "Bud" Cummins as U.S. attorney for the Eastern District of Arkansas. Sampson says, if Pryor tries to accuse the administration of "a conspiracy to keep Tim in office, etc., etc., then we'll want to have this letter to wave around."

In the letter, which Sampson says was "cleared" by the White House, the Justice Department says: "At no time has the Administration sought to avoid the Senate confirmation process by appointing an interim United States Attorney and then refusing to move forward, in consultation with home-state Senators, on the selection, nomination and confirmation of a new United States Attorney. Not once."

But in a Dec. 19, 2006, e-mail, released earlier, Sampson says of efforts by Arkansas' two Democratic senators to pick a permanent replacement for Cummins: "I think we should gum this to death.... All this should be done in 'good faith' of course."

The documents also show that Carol Lam, the U.S. attorney in Southern California, was under intense pressure from members of Congress for not pursuing enough illegal immigration cases. In one e-mail, she discusses a meeting with two lawmakers in which she explained that, with limited resources, she has to make a choice whether to "prosecute the coyotes who are smuggling but not endangering anyone, or the rapists and murderers who are coming back to rape and murder again."

Lam says that the meeting "was fine (at least I think it was)." Rebecca Seidel, a deputy assistant attorney general, passed the Lam e-mail along, adding: "Sounds like she handled well."

The personal toll of the firings was also apparent in the documents. In a Feb. 1, 2007, e-mail, the U.S. Attorney for the Western District of Michigan, Margaret Chiara, wrote to Deputy Attorney General Paul McNulty:

Everyone who knows about my required resignation is astonished that I am being asked to leave. Now that it has been widely reported that departing U.S. Attorneys have either failed to meet performance expectations or that they acted independently rather than follow Justice Department directives, the situation is so much worse. You know that I am in neither category. This makes me so sad. Why have I been asked to resign? The real reason, especially if true, would be a lot easier to live with. Margaret.

At the end of February, Justice Department spokeswoman Tasia Scolinos e-mailed a group of her colleagues to ask how to handle the announcement of Chiara's departure:

I believe this will generate another round of rough stories as expected. Her press release paints a pretty darn good record and emphasizes her many "firsts" as a woman, which the media will no doubt play up.

A month later, Chiara again wrote the deputy attorney general with a plea:

Paul: I respectfully request that you reconsider the rationale of poor performance as the basis for my dismissal ... politics may not be a pleasant reason, but the truth is compelling. Know that I am considered a personification of ethics and productivity ... the notoriety of being one of the eight fired U.S. attorneys coupled with my age being constantly cited in the press is proving to be a formidable obstacle in seeking employment.

In the case of Bud Cummins of Arkansas, a chain of e-mail showed miscommunication and anger among the Justice Departrment's leaders over the rationale for the man's dismissal.

After Deputy Attorney General McNulty told Congress that Cummins was asked to step down so a political ally could take his place, Justice Department spokesman Brian Roehrkasse wrote:

The Attorney General is extremely upset with the stories on the U.S. attorneys this morning ... he also thought some of the deputy attorney general's statements were inaccurate ... from a straight news perspective, we just want the stories to die...

In a statement Monday night, Roehrkasse said Gonzales was upset because he believed Cummins was fired because of performance issues.

Cummins wrote a letter to the Justice Department saying, "I have no hard feelings."

In an e-mail, he discusses writing a letter in support of his replacement, Tim Griffin, but adds: "As predicted, my wife is strongly opposed to me writing on Tim's behalf, so I still have some work to do there."

He told the Justice Department that he had been asked to testify before Congress, saying "I'm completely neutral to testifying."

Sampson, the former chief of staff, wrote in an earlier e-mail that he thought it would be a bad idea for Cummins to testify, asking how he would answer the following questions:

Did you resign voluntarily? Were you told why you were being asked to resign? Did Griffin [Cummins' replacement] ever talk about being attorney general-appointed and avoiding Senate confirmation?

A month later, Sampson wrote to the Justice Department spokespeople with some good news for them. That e-mail says that according to the top lawyer to Sen. Charles Schumer (D-NY), the U.S. attorneys issue "has basically run its course."

"They need to get a little more information from us," Sampson predicted. "But that will be it."