Accessibility links
Dallas Man Exonerated After 27 Years in Prison James Lee Woodard walked out of a Texas prison last week after almost three decades behind bars. The state now agrees that Woodard was wrongfully convicted in 1981 of killing a girl he had been dating. Woodard is the 17th man from Dallas to be cleared by DNA evidence. 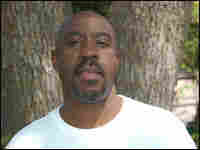 James Lee Woodard, who was exonerated after serving 27 years in prison, says, "Time is what you make of it. You're living no matter where you are." Wade Goodwyn, NPR hide caption 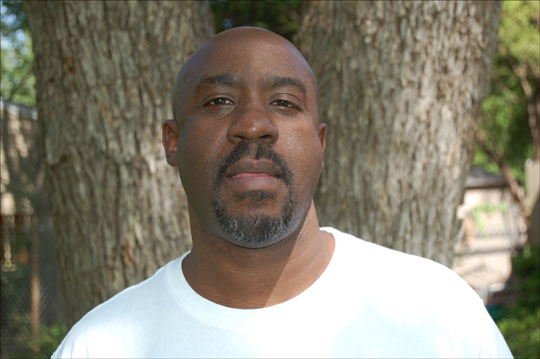 James Lee Woodard, who was exonerated after serving 27 years in prison, says, "Time is what you make of it. You're living no matter where you are."

James Lee Woodard never gave up writing letters to anybody who might help him prove his innocence. 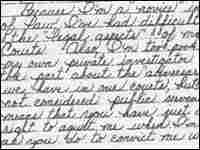 In a July 1984 letter to Henry Wade, then the Dallas district attorney, Woodard wrote, "There were two victims in my case, the 'murdered' victim and myself. I feel certain that if this case had been investigated adequately, this miscarriage of justice would not have [occurred]."

In another letter, written in March 1985, Woodard asked Wade, "I really would like to know one thing, if you found out for yourself that I was innocent, would you let me go? If your answer is yes, bring me back to Dallas, and I'll [submit] myself to any kind of tests made possible by man to prove my innocence."

View a response from Wade's office from August 1983, which reads, "A jury of your peers has decided who murdered Beverly Ann Jones on or about December 31, 1980. We do not believe any further investigation is warranted." 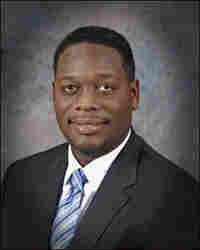 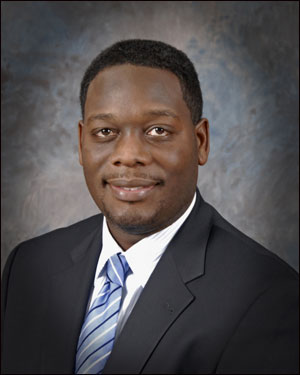 James Lee Woodard walked out of a Texas prison last week after 27 years behind bars. The state now agrees that Woodard was wrongfully convicted in 1981 of killing a girl he had been dating.

Woodard is the 17th man from Dallas to be exonerated by DNA evidence. Nearly all are black. And the district attorney's office is predicting that Woodard won't be the last.

Woodard had been dating 21-year-old Beverly Ann Jones for seven months before she was raped and murdered. It was Christmastime 1980, and, although the young woman had no idea, her time was running out.

"She told me that she was going to spend the weekend with her mother and take her mother some Christmas presents. She was sitting in the bathtub when I left," Woodard recalls.

He would never see Jones again.

A few days later, Woodard was with his mother when word began racing around the neighborhood that Jones had been found murdered down by the Trinity River. Woodard says he was stunned. He got in his car and drove around by himself for awhile before going back to his mother's house.

"I was sitting on her couch; I wanted to see the news," he says, "and someone knocked on her door. It was the police."

Woodard didn't think anything of it. He thought the cops wanted his input to help their investigation. He hopped in his car and went down to the station behind the officers. But once he arrived, he quickly discovered that he was becoming the police's prime suspect.

The detective took Woodard aside. "He said, 'We really don't have nothing to tie you into it. It's your people who are saying you did it.'"

Jones' stepfather told the police that on the night she was murdered, Woodard had come to his house looking for her. That identification, which the stepfather now concedes was incorrect, steered the police toward Woodard, and they slapped him into jail. But even at that point, Woodard was blinded by his innocence.

"You know, I just wrote it off as, 'Hey, you know, they're going to lock me up, I guess, until they really check it out,'" he says.

Woodard had no idea how wrong he was. He was about to lose the next three decades of his life to prison. And the fact was, Woodard had pretty good reason not to worry — he had a solid, if somewhat embarrassing, alibi. Woodard was two-timing Jones. The night she was murdered, Woodard was 30 miles away in Arlington, spending the night with his other girl.

Not only that, but they were at the girl's aunt's house, and the aunt was there all night, too. These two women told police that Woodard couldn't have murdered Jones because he was with them. But Woodard was an attractive suspect to the police: He had been convicted of theft when he was a teenager, so he was an ex-con.

Dallas District Attorney Craig Watkins says that back in the late 1970s and '80s, good alibis didn't necessarily carry a lot of weight under those circumstances.

"The political climate was being tough on crime," he says. "And the success of the DAs — it was considered to be very successful if you had a very high conviction rate, you sent a lot of folks to prison."

Watkins, Texas' first African-American district attorney, says he saw plenty of prosecutorial abuse when he was on the other side as a defense attorney. Now that he's running the DA's office, he has completely changed the culture.

It turns out that one witness had come forward and told police that he had seen Jones in the company of three other men the night she was raped and murdered. Not only that, but two of the men had been arrested and charged with raping other women since Jones' murder. And even though prosecutors are required by law to turn over exculpatory evidence to the defense counsel, Watkins says the police department and the Dallas district attorney's office at the time maliciously kept that information from the jury.

"It's ruining lives," Watkins says. "Not only is it ruining defendants' lives, but the victim. Because if you just put someone in jail because it's easy, the person that actually committed the crime is still out there, and is still committing crime. I believe that the failures of the DAs have really added to the criminal problem we have in Texas."

Woodard is the 17th man to be released using DNA evidence just from Dallas. The reason the city has had so many exonerations is because unlike every other major city in Texas, Dallas kept its DNA evidence instead of throwing it out.

Perhaps the most unsettling fact in all of this is that out of the 40 cases that have been reviewed so far, there have been 17 exonerations. That's an error rate of more than 40 percent. When asked how many more exonerations can be expected, Watkins says, "A lot."

"It's going to be more than dozens, and I think that ... it's going to be a lot more," he says. "I couldn't tell you an exact number. I think there's a large number of individuals that may have been convicted where there's no DNA, and then the real perpetrator is out there, and we have to figure out how to address that."

What's new about this case is that Woodard is the first to be exonerated of murder. All the other men were convicted of rape alone. The district attorney very likely could have kept Woodard in prison by simply taking the position that, even though DNA proved Woodard hadn't been the one to rape Jones, that meant nothing for his murder conviction.

But Watkins says he has no interest in keeping innocent men in prison. He's investigating other questionable cases in cooperation with the Innocence Project of Texas.

"The easy cases are over," says Jeff Blackburn, the project's chief counsel. "Mr. Woodard's case is an example of what's really out there now. For every James Lee Woodard there is out there, there are 500 other guys exactly like him who just didn't have the good luck to be from a county where they preserved evidence. That doesn't make him any less innocent. It just makes the work to get them out and to prove their innocence that much harder."

Blackburn has enlisted the help of students and professors from three Texas law schools and two universities to help with the labor-intensive process of combing through case files. He says he has four more almost exactly like Woodard's already in line.

Blackburn believes the number of innocent men in Texas prisons convicted of rape and murder runs into the hundreds.

But for one innocent man, life is beginning anew after 27 years of waiting.

Woodard doesn't know how a cell phone works and has no inkling of Macintosh versus PC. He's neither bitter nor angry, and he will not agree that those years in prison were for naught.

"Time is what you make of it," he says. "You're living no matter where you are. I think I came out pretty good. I think I won. I think I'm a winner."

As the years went by, Woodard never gave up writing letters and writs to anybody who might help him prove his innocence. He couldn't get parole because he steadfastly refused to say he was sorry, even after one board member quietly took him aside and said they would set him free if he would. He loves dogs and would still like to have a family, but he believes that most women are likely to see him as damaged goods.

But with an easy smile, fit and attractive at age 55, he could be wrong about that.

Larry Peterson: Life After Exoneration June 13, 2007
Exonerated Prisoners Adjust to Life on the Outside Feb. 27, 2007