Accessibility links
Oil-Rich Abu Dhabi Builds Renewable-Energy City In the United Arab Emirates, Abu Dhabi sits on nearly 10 percent of the world's oil reserves. So it may be surprising to hear that climate leaders there have launched a major initiative in sustainability. Masdar, a demonstration city of 50,000 inhabitants, will have a zero carbon footprint.

Read Part 2 in This Series

In the United Arab Emirates, Abu Dhabi sits on nearly 10 percent of the world's oil reserves. So it may be surprising to hear that climate leaders there have launched a major initiative in sustainability called Masdar. The demonstration city of 50,000 inhabitants will have a zero carbon footprint.

As part of our Climate Connections series with National Geographic, host Steve Inskeep talks with NPR's Joe Palca about the project. 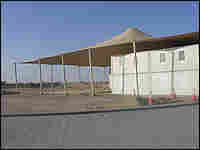 The city, in its beginning stages of construction, is still mostly an expanse of desert. Rebecca Davis, NPR hide caption

In the desert of Abu Dhabi, a novel experiment in sustainability is under way.

Over the next decade, a city of 50,000 residents will be built from scratch. And unlike any other city in the world, Masdar City will have no carbon footprint. Once it's built, the city will be powered entirely by renewable energy.

But, the United Arab Emirates is an oil-rich nation containing approximately 10 percent of the world's oil reserves. So why is Abu Dhabi doing this?

"The answer is simple," says Sultan Al Jaber, CEO of Abu Dhabi Future Energy Co., the developers planning the city. "There are two reasons. Number one, because we can. Number two, because we should. And because this is a logical step and a natural extension for our involvement in the energy markets."

In other words, when the oil runs out, which it eventually will, Abu Dhabi wants to be ready to sell the world solar or wind or whatever renewable technologies will be needed to supply people's energy needs.

But there's another reason.

"Abu Dhabi wanted to show that it's aware of its carbon footprint today," says Khaled Awad, the man in charge of building Masdar City. He says Abu Dhabi has already committed $4 billion for the project and plans to raise another $18 billion.

This scale of investment is attracting attention. The Massachusetts Institute of Technology has signed on to help Abu Dhabi establish the Masdar Institute, an institute devoted to research in renewable energy.

It's also attracting attention in the architectural world. Foster and Partners, an architectural firm based in London, has done the initial design work for Masdar City.

Ultimately, though, the project may come back to image. Nader Ardalan, an architecture reserach fellow at Harvard University, says people in the oil-producing world want to be considered in a different light. "They want to not be viewed as Bedouins. They want to be viewed as people of conscience and education," he says.

And in a way, many of the benefits of building Masdar City will flow to the West, Ardalan says, because so many Western firms are contributing. In addition, Masdar City will be a test bed for new technologies.

"Mistakes will be made," Ardalan says, "and we'll be able to learn a lot. And I think we can then transfer this back to America, which is sort of funny because normally the transfer has been American technology, Western technology going to the East."