Accessibility links
Finding Comfort in Feeling Trapped Dolorean's You Can't Win wallows in the dark corners of singer Al James' psyche, but "Just Don't Leave Town" raises the discourse from miserablism to ambivalence. After a bit of downbeat self-analysis, James perks up as he hits a brightly shuffling, bittersweet chorus. 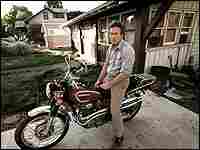 Dolorean isn't known for looking on the bright side: The best song from 2003's Not Exotic, "Hannibal, MO" (audio), finds singer Al James sitting in a prison cell as he deconstructs the events leading to his true love's death. The best song from 2004's Violence in the Snowy Fields, "To Destruction" (audio), perks up only slightly, finding a glimmer of a sliver of a hint of a silver lining to things falling apart.

The band's new You Can't Win (sense a theme?) continues to wallow in the dark corners of James' psyche, though "Just Don't Leave Town" raises the discourse from miserablism to ambivalence. After a bit of characteristically brutal, downbeat self-analysis — "I get the feeling there's no winning / when I can't afford to lose" — the song perks up considerably, hitting a brightly shuffling, bittersweet chorus.

In effect, "Just Don't Leave Town" finds James singing a debate-style duet with himself: In the verses, his "hand's been played out," with no choice left but to "start running." But once the chorus' sunny, loping counterpoint hits, he's effectively talked himself out of it: "Just don't give up on the place you've grown to love." James' songs have never been much for resolution, but here he seems to settle, once and for all, on the side of what he knows. It may be hell, but at least it's home.

Estrangement Gets a Lilting Makeover Dec. 1, 2006