Accessibility links
Army Focus on Counterinsurgency Debated Within An internal Pentagon report is raising concerns about the Army's deteriorating ability to fight conventional battles. It's the latest twist in an ongoing debate within the Army over whether it is now too focused on what's called counterinsurgency training. 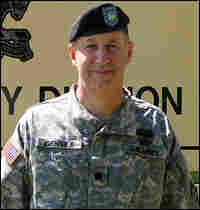 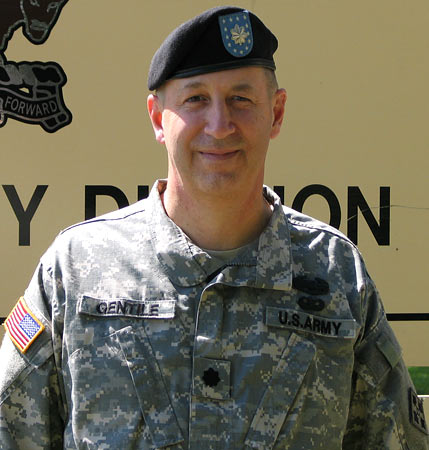 Lt. Col. Gian Gentile, who served two tours in Iraq, is perhaps the most outspoken internal critic of what he calls the Army's dangerous obsession with counterinsurgency. 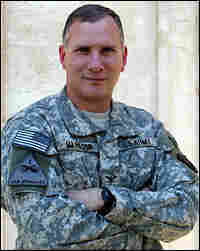 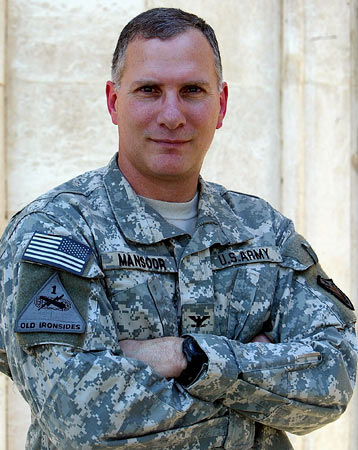 Col. Peter Mansoor, a top aide to Gen. David Petraeus, says the Army is right to focus on counterinsurgency training.

An internal Pentagon report is raising concerns about whether the Army's focus on counterinsurgency has weakened its ability to fight conventional battles. The report's authors — all colonels with significant combat experience — say the Army is "mortgaging its ability to (successfully) fight" in the future.

The report, recently obtained by NPR, is the latest twist in an ongoing debate within the Army over whether it is now too focused on counterinsurgency training. The counterinsurgency doctrine emphasizes the use of minimal force, with the intent of winning the hearts and minds of a civilian population.

U.S. Defense Secretary Robert Gates sent a subtle but firm message to the Army a couple of weeks ago when he announced that Gen. David Petraeus — a staunch counterinsurgency advocate — has been nominated to take the helm of Central Command, where he will oversee the wars in Iraq and Afghanistan. The post is arguably the highest-profile assignment in the U.S. military today.

Nagl's book on counterinsurgency, Learning to Eat Soup with a Knife, is a modern classic on the subject. Nagl was based in Anbar province during a 2003-04 tour in Iraq, and he says it was there that he realized the U.S. Army had gotten itself tangled up in an insurgency.

He began helping write the Army's counterinsurgency handbook, better known as Field Manual 3-24. The manual is like a roadmap for officers: It emphasizes the use of minimal force. The idea in a counterinsurgency campaign, Nagl says, is to drive a wedge between the civilian population and insurgents who live among them.

But the man most closely identified with counterinsurgency doctrine is Petraeus, who oversaw the writing of Field Manual 3-24.

When Petraeus updated Congress last month on progress in Iraq, he highlighted the doctrine as a reason for a decline in violence. He cited "the employment of coalition and Iraqi forces and the conduct of counterinsurgency operations across the country."

Col. Sean MacFarland was among the first to successfully apply counterinsurgency doctrine in Iraq in 2006. And yet he was a co-author of the recent internal Army report suggesting that the Army is far too focused on counterinsurgency training. This singular focus, he writes, is weakening the Army.

The report cites field artillery as an example of an area that has suffered from inattention. Since 1775, artillery units have served as the backbone of the U.S. Army. But today, a stunning 90 percent of these units are unqualified to fire artillery accurately — the lowest level in history.

MacFarland declined to be interviewed for this story. But views like his have been amplified publicly by an iconoclastic, Berkeley-educated officer, Lt. Col. Gian Gentile.

"Due to five years in Iraq and six years in Afghanistan, I believe that the U.S. Army has become a counterinsurgency-only force," Gentile said recently during a public lecture in Washington. He also declined to comment for this story.

Gentile, who served two tours in Iraq, is perhaps the most outspoken internal critic of what he calls the Army's dangerous obsession with counterinsurgency.

"The high public profile of the new counterinsurgency manual, combined with the perception that its use and practice with the surge in Iraq has lowered the violence, I think has had a Svengali effect on us," Gentile said during the lecture. "It's almost like we have a secret recipe for success now involving counterinsurgency and irregular war."

Gentile, who is chairman of the American history program at West Point, has many silent supporters in the Army, but he's also been loudly criticized.

In a recent posting on a counterinsurgency blog, Col. Peter Mansoor, a top aide to Petraeus who also helped write Field Manual 3-24, accused Gentile of "misreading the history of what's happening in Iraq."

In response, Gentile charged Mansoor with "overstating" the success of counterinsurgency tactics.

Still, Mansoor insists that the Army's current training regimen is spot on.

Nagl says he is convinced that irregular warfare and counterinsurgency campaigns will define what the U.S. military will do in the future.

"War in the Information Age is war in which our enemies will fight us using Information Age weapons — precision-guided missiles, cell phones, the Internet — all of the implements of technology that the Information Age allows," Nagl says. "But they will also use them in an Agricultural Age manner, drawing upon the strength of tribes and basic family units and they will wage war from among the peoples."

Retired Army Col. Douglas Macgregor, whose research helped transform the Army's organizational structure in the 1990s, doesn't necessarily dispute that point, but he says he disputes the idea that the Army's adoption of counterinsurgency has made it a better force.

He argues that this viewpoint encourages a more interventionist posture within the Army — a position that will make it easier for the Army to wage war in the future.

"I think it's downright dangerous because it suggests that we can repeat the folly of Iraq," Macgregor says. "That somehow or another, next time we can get it right without understanding that if the population is living within a social structure that doesn't want to change, if the population doesn't want you in the country, if there is no legitimate government to begin with, your intervention is doomed to inevitable failure."

But Macgregor and Gentile are swimming against a powerful current. Counterinsurgency doctrine is intimately tied to a new role the Army has formally carved out for itself.

Earlier this year, it added "stability operations" to its growing portfolio of jobs. So a mission once derided as "nation-building" and "peacekeeping" by powerful figures in the Bush administration is now a key part of how the Army sees its role around the world.