Accessibility links
In 'XXY,' a Teen Affair, If Trickier than Most Fifteen-year-old Alex was born with both male and female sex organs, and that singularity is starting to matter. A doctor offers help, but it's the medico's 16-year-old son whose attentions interest Alex. Quirky, sharply observed performances, paired with tricky questions about identity, gender and sexuality.

In 'XXY,' a Teen Affair, If Trickier than Most

In 'XXY,' a Teen Affair, If Trickier than Most 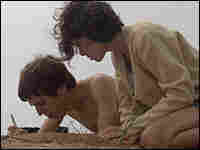 A budding romance between Alex (Ines Efron, right) and Alvaro (Martin Piroyansky) raises questions for those who know and love them best. Film Movement hide caption 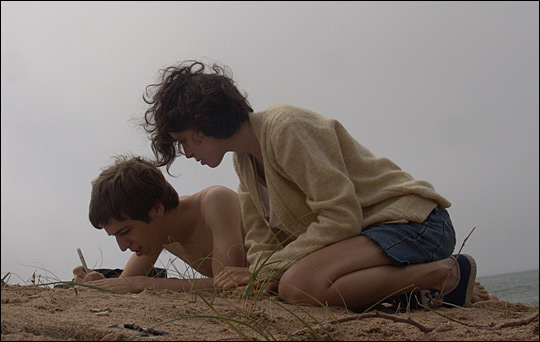 A budding romance between Alex (Ines Efron, right) and Alvaro (Martin Piroyansky) raises questions for those who know and love them best.

A sensitive, earnest first film from Argentine director Lucia Puenzo, XXY concerns an intersex child who has reached an age when, despite the support of family and friends, the fact of having two complete sets of sex organs is starting to matter.

Alex has been raised as a girl by parents who declined surgical intervention when she was born — and who spirited her off to the Uruguayan shoreline, where they have nurtured her independent spirit and allowed her to make her own choices.

Now 15, Alex has chosen to stop taking medication and is consequently beginning, in the words of a visiting surgeon, to "masculinize." That the surgeon has brought along his 16-year-old son, and romantic sparks have begun to fly between the kids, brings a number of tricky questions to the fore.

Puenzo, who laces XXY with images of hermaphroditic flora and fauna, hasn't created a medically accurate story so much as an emotionally accurate one — a tale of kids who, like most, find themselves puzzling out identity questions just as they're falling in love.

The movie's images (including a sex scene that seems as much a surprise to the participants as it is to the audience) are frequently startling, its performances sharply observed and quirky — especially those of young leads Inez Efron and Martin Piroyansky — and its take on its subject matter undeniably provocative.