Accessibility links
Savoring The Spice In Kung Pao Chicken Melissa Block learns how to cook the spicy dish at the Sichuan Higher Institute of Cuisine in Chengdu, China. The spice comes from the Sichuan peppercorn, which has a numbing power. 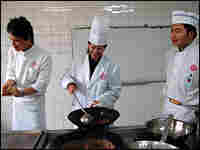 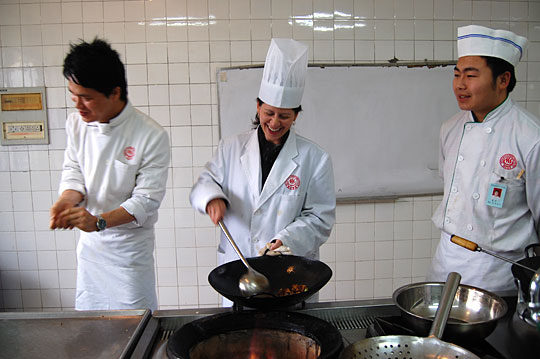 Melissa Block learns how to cook Kung Pao chicken at The Sichuan Higher Institute of Cuisine in Chengdu. 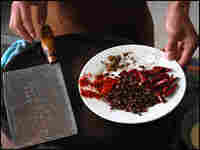 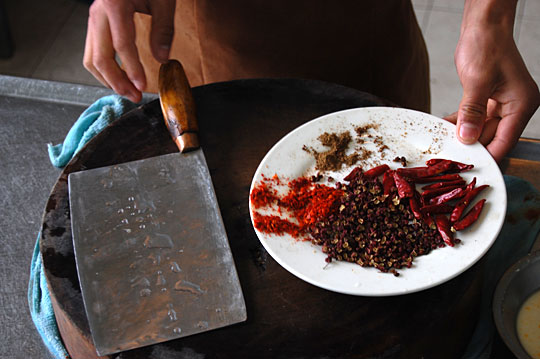 Sichuan peppercorns (center) are a distinctive taste in Sichuan food. Their numbing power can also be applied to ease toothaches.

Get the recipe for Gong Bao (Kung Pao) Chicken. 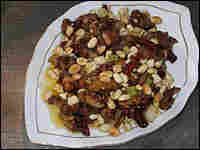 When we decided to do a week of All Things Considered broadcasts from Chengdu, China, in May, little did we imagine that we'd find ourselves covering an 8.0 magnitude earthquake. The earthquake hit the day after I arrived in Chengdu.

I had been in Chengdu in April, gathering material for stories to air the next month. I had planned to do one story a day on the food of Sichuan, which is justly famous and utterly delicious.

Naturally, the earthquake put those stories on hold.

Now, here's one of those stories, from a day I spent at the Sichuan Higher Institute of Cuisine in April. It's a prestigious cooking school in Chengdu that is training the next generation of chefs. The school reopened just a couple of days after the earthquake.

The Lure Of Sichuan Food

Sichuan food is famous for its mouth-numbing, spicy heat. And in the time I spent in Chengdu, I grew especially intrigued by a singular Sichuan sensation: ma.

Ma means "numbing" in Chinese, and that numbing sensation is a distinctive characteristic of Sichuan food. It comes from the Sichuan peppercorn, hua jiao, which translates to "flower pepper."

These peppercorns are not to be confused with hot red chili peppers. In fact, the Sichuan peppercorn isn't a pepper at all. It's an aromatic berry from the prickly ash tree.

When they're dried, the peppercorns turn a beautiful purple, and they're used with abandon in many dishes.

And there's another use: I've learned that you can put a peppercorn in your mouth to numb a toothache.

That was one lesson among many I learned during the day I spent at the school.

My teacher at the school, Li Jianqing, challenged me to bite into a Sichuan peppercorn. He told me a Swiss visitor had tried, but couldn't handle it.

Well, I couldn't resist that challenge, so I popped a peppercorn into my mouth and chomped down hard. Right away, my tongue started to tingle. Then, the sensation spread. My mouth started buzzing, dancing with a fizzy heat. The tingling moved from my tongue to my lips — it was a good tingling, not painful. Bit by bit, the taste filled my mouth — fragrant and a little bit sour.

Then, we got down to business. Li gave me a cooking demonstration, expertly stir-frying a wokful of a classic Sichuan dish: Kung Pao chicken, or chicken with peanuts, flavored with hot chilies and Sichuan pepper.

Before I left for Chengdu, the food writer Fuchsia Dunlop told me I had to eat Kung Pao chicken there. She said it would taste totally different from the dish I'd eaten many times in Chinese restaurants in the U.S.

And she was right. When I sampled Li's Kung Pao chicken, it had layers of flavor I had never tasted before.

My Turn To Sweat

Then Li challenged me again: "Can you do this dish?"

There's only one answer to that.

So, I put on a white chef's hat and got to work on the Kung Pao chicken. First, I mixed up the sauce — black vinegar, soy sauce, salt and sugar, mixed with corn starch and water — and poured it over the diced chicken. Li turned the gas on under the wok, and the flame roared up fiercely around it.

I tossed the chicken in the wok and started stir-frying, maybe a bit too energetically.

It turns out, stir-frying in a mock professional kitchen is harder than it looks. The wok was heavy and seemed huge. I held one handle with my left hand, which was wrapped in a towel to protect it from the heat. But it was an awkward grip, and when it came time to slide the chicken out of the wok, I lost some in the process.

Into the wok went hot chilies and those famous Sichuan peppercorns. Then, ginger, garlic and scallions. Last, I dumped the chicken back in, stir-fried it all together, and that was it.

Finally, the moment of truth. Li took a bite.

But I knew he was just being kind to a visitor. And he was too polite to mention that I had burned the chilies.

This dish, also known as Kung Pao chicken, has the curious distinction of having been labeled as politically incorrect during the Cultural Revolution. It is named after a late Qing Dynasty (late nineteenth century) governor of Sichuan, Ding Baozhen, who is said to have particularly enjoyed eating it — gong bao was his official title. No one can quite agree on the details of its origins: some say it was a dish Ding Baozhen brought with him from his home province of Guizhou; others that he ate it in a modest restaurant when he went out in humble dress to observe the real lives of his subjects; still others, rather implausibly, that his chef invented the finely chopped chicken dish because Ding Baozhen had bad teeth. Whatever the truth of its origins, its association with an imperial bureaucrat was enough to provoke the wrath of the Cultural Revolution radicals, and it was renamed "fast-fried chicken cubes" (hong bao ji ding) or "chicken cubes with seared chiles" (hu la ji ding) until its political rehabilitation in the 1980s.

Gong Bao chicken is beautiful to look at: a glorious medley of chicken flesh, golden peanuts and bright red chiles. The sauce is based on a light sweet-and-sour, pepped up with a deep chile spiciness and a trace of Sichuan pepper that will make your lips tingle pleasantly. The ingredients are all cut in harmony, the chicken in small cubes and the scallion in short pieces to complement the peanuts. The chicken should be just cooked and wonderfully succulent; the nuts are added at the very last minute so they keep their crispness.

Serves 2 as a main dish with a simple stir-fried vegetable and rice, 4 as part of a Chinese meal with three other dishes

2 boneless chicken breasts, with or without skin (about 2/3 pound total)

3 cloves of garlic and an equivalent amount of fresh ginger

1. Cut the chicken as evenly as possible into 1/2-inch strips and then cut these into small cubes. Place in a small bowl and mix in the marinade ingredients.

2. Peel and thinly slice the garlic and ginger, and chop the scallions into chunks as long as their diameter (to match the chicken cubes). Snip the chiles in half or into 2-inch sections. Wearing rubber gloves, discard as many seeds as possible.

3. Combine the sauce ingredients in a small bowl — if you dip your finger in, you can taste the sweet-sour base of the gong bao flavor.

4. Season the wok, then add 2 tablespoons of oil and heat over a high flame. When the oil is hot but not yet smoking, add the chiles and Sichuan pepper and stir-fry briefly until they are crisp and the oil is spicy and fragrant. Take care not to burn the spices (you can remove the wok from the heat if necessary to prevent overheating).

5. Quickly add the chicken and fry over a high flame, stirring constantly. As soon as the chicken cubes have separated, add the ginger, garlic, and scallions and continue to stir-fry for a few minutes until they are fragrant and the meat is cooked through (test one of the larger pieces to make sure).

6. Give the sauce a stir and add it to the wok, continuing to stir and toss. As soon as the sauce has become thick and shiny, add the peanuts, stir them in, and serve.

The same dish can be made with cubes of pork, shrimp, or prawns.

Cashew nuts can be used instead of peanuts for a grander version of this dish, although peanuts are more traditional.

Reprinted from Land of Plenty: Authentic Sichuan Recipes Personally Gathered in the Chinese Province of Sichuan by Fuchsia Dunlop. Copyright (c) 2001 by Fuchsia Dunlop. With permission from the publisher, W.W. Norton & Company, Inc.