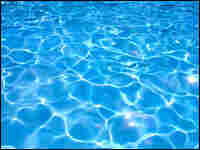 So there was a study released last week that caught my eye. According to USA Swimming, over 58 percent of African-American children can't swim. That's almost double the rate of white children. And African-American children drown at nearly three times the overall rate. That got us here at the BPP asking questions about, well, race and swimming. And it turns out there's a lot to say about the topic.

Swimming pools offer their own history lesson, of sorts, about how the U.S. has or hasn't dealt with racial tensions over the years, and much of that history is chronicled in a book by Jeff Wiltse. He's the author of "Contested Waters," which is pretty much the entire canon of swimming pool history out there. And Jeff joins me on the line now. Hey, Jeff.

MARTIN: Hey, thanks for joining us.

MARTIN: So, Jeff, you wrote that, in the late 19th century and early 20th, municipal pools, city pools, weren't built, just weren't built in African-American neighborhoods in the same way, or at the same rate that they were in other neighborhoods. Then things seemed to shift in the '20s and '30s. Pools were segregated, but separate-but-equal wasn't really equal. Right? Talk about how those pools varied. What were the differences?

Dr. WILTSE: OK, well, first let me address what you brought up initially, which is that, during the late 19th and early 20th century, cities throughout the northern United States built lots of pools in poor, immigrant, working-class-white neighborhoods, but conspicuously avoided building pools in neighborhoods inhabited predominately by black Americans.

And then in the 1920s and 1930s, there was a pool-building spree in the United States. And there were thousands, literally thousands and thousands of pools that were opened up in the 1920s and 1930s, and many of them were large, leisure-resort pools. They were - some of them - larger than football fields. They were surrounded by grassy lawns, and concrete sundecks, and they attracted literally millions and millions of swimmers.

And yet, it was at that point in time that cities began to racially segregate pools throughout the north, and it then extended, obviously, all throughout the United States. And black Americans were typically relegated, if a pool was provided at all, to a small indoor pool that wasn't nearly as appealing as the large, outdoor resort pools that were provided for whites.

And so, take the city of St. Louis. In St. Louis, black Americans represented 15 percent of the population in the mid-1930s. But they only took one-and-a-half percent of the number of swims because they were only allocated one small indoor pool, whereas white residents of St. Louis had access to nine pools. Two of them were the large resort pools that I've been describing.

MARTIN: Hm. And you have written about some specific instances where there was some real violence surrounding these swimming pools, when black people would try to access these white pools. Can you tell us about some of those incidents, specifically in Highland Park?

Dr. WILTSE: Yeah, sure. So, there were two ways in which communities racially-segregated pools at the time. One was through official segregation, and so police officers and city officials would prevent black Americans from entering pools that had been earmarked for whites. The other way of segregating pools was through violence.

And so, a city like Pittsburgh, it did not pass an official policy of racial segregation at its pools. But rather, the police and the city officials allowed, and in some cases encouraged, white swimmers to literally beat black swimmers out of the water, as a means of segregating pools, as a means of intimidating them from trying to access pools. And so there was an instance, well, there was a series of instances over two summers in Highland Park pool, when it was first opened in 1931...

MARTIN: In Chicago, we should say.

Dr. WILTSE: So Highland Park pool is actually in Pittsburgh.

Dr. WILTSE: Yeah, Highland Park pool is in Pittsburgh. And so young black men, typically, between, say, 16 and 20, tried to access the pool, and if they made it into the water, they were oftentimes beat and dunked and punched in the water.

Eventually, whites set up, essentially, sentinel guards at the entrance to the pool, and when black swimmers tried to come in and access them, they were beaten up, sometimes with clubs. They were punched to the ground. They were kicked on the ground. In my book, I have some pictures of black Americans who literally sort of lie still on the ground with bloody heads from being pummeled to the ground, just for trying to access a swimming pool.

And this fear of segregated - or integrated swimming pools comes up so often. In 1968, Strom Thurmond, who was running as president as a Dixiecrat, he said, there's not enough troops in the Army to force the southern people to break down segregation - I'll omit a word he said - and admit - essentially, he was saying black people - into our theaters, into our swimming pools, into our homes and into our churches. It was always top-of-mind in racist America.

MARTIN: What is it about the swimming pool, Jeff, that was such as flashpoint for these racial tensions?

Dr. WILTSE: Yeah, there - excuse me. There are two things. One is, well, I mean, basically it boils down to swimming polls being very intimate spaces, both physically intimate and also visually intimate. And so physically intimate, in the sense that you're sharing the same water. And there has always been fears, in terms of using swimming pools, about being exposed to the dirt and the disease of other swimmers.

And back during the 1920s and 1930s, and it really continuing on even further up from there, there were racist assumptions that black Americans were dirtier than whites, that they were more likely to be infected by communicable diseases. And so, in part, the push for racial segregation and racial exclusion was for white swimmers to avoid being infected by the supposed "dirtiness" of black Americans.

But I argue that the primary and the most crucial cause for racial segregation was gender integration, that most whites did not want black men, in particular, to be able to have access to white women at such an intimate public space...

MARTIN: So because - and this is important because pools used to be gender-segregated as well, right?

Dr. WILTSE: Yeah, absolutely. So in the late 19th and early 20th century, swimming pools were almost always universally-segregated along gender lines. And so, racial segregation at pools in the North arose during the 1920s and 1930s, at the precise time that cities started to gender-segregate pools. And so in case after case after case, racial segregation occurred at the exact moment that gender integration occurred.

And the concern was the black Americans, black men, would take advantage of the pool environment, to brush up against white women, to touch them in the water, to visually consume them, as they were wearing, you know, relatively-tight-fitting, relatively-revealing swimsuits. And this sort of played into a psychology of needing to separate black men from white women.

MARTIN: So when desegregation happened, '40s and '50s, they were - swimming pools were integrated, then you write about what was called "white flight," essentially, from municipal pools. People started - white people started building their own private pools or individual, in family homes, even. Can you talk about the legacy of that phenomenon?

Dr. WILTSE: Yeah, sure. So, municipal pools, in at least the northern and western United States, were racially-desegregated in the late 1940s and the 1950s. And what I found is that in city after city after city, when a municipal pool became racially-desegregated, and so a court would order that the pool has to be open to blacks and whites without discrimination, what I found was that the overall attendance to the pool would plummet, and that, literally, the majority of whites who had been using the pool previously stopped using the municipal pools.

They abandoned them, but they didn't stop swimming. What they did is they then retreated to private pools. They built private club pools, which were able to continue to legally discriminate against black Americans. Or they build at-home residential pools, so they could really enclose themselves off from the larger public and truly exercise control over who they were swimming with.

PESCA: Did you find that there was white flight more from public pools than other public institutions, like public transportation or the public schools?

Dr. WILTSE: I didn't study those other institutions, but based upon what I know of scholarship that has studied those, the answer is yes, that the impact that desegregation had upon swimming pools was much more profound than on other spaces, even residential neighborhoods. The term "white flight" has typically been used to describe the phenomenon of when a residential neighborhood would become racially-integrated.

That a black family would move into a neighborhood that had previously been all white, that large numbers of white families would then move out of that neighborhood. And that's typically what "white flight" has been referred to. But I think the phenomenon was even more pronounced at swimming pools, precisely because it's such an intimate public space.

MARTIN: Lastly, Jeff, what's the situation now? I mean, we pegged this to the study that was released giving some startling numbers about swimming rates among African-American children. Have you looked at what the role of swimming pools is today? Is it any better?

Whereas municipal pools are being closed down at an alarming rate and they're not being replaced by new pools. And so relatively poor people, especially people living in large inner cities, have much less access to swimming pools than Americans have at any time during the last, say, hundred years.

MARTIN: Well, it's a fascinating topic, a really interesting lens with which to view history and racial relations in the U.S. Jeff Wiltse is the author of a book called "Contested Waters." Hey, Jeff, thanks very much for being on the BPP. We appreciate it.