Accessibility links
Ode to the Second Checked Bag Airlines have begun charging $25 for a second checked bag to help make ends meet as jet-fuel costs continue to rise. It isn't clear how travelers will cope with the changes and whether they'll be willing to pay for the passage of their golf clubs, skis and extra items.

Ode to the Second Checked Bag

Ode to the Second Checked Bag 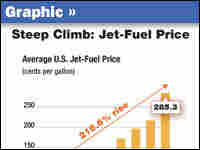 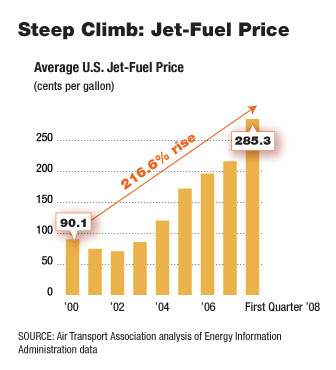 It's time for air travelers to say goodbye to the beloved second bag for extra jackets and shoes, hiking boots and beach towels. And for sports enthusiasts, it's time to wrap some extra cash around those golf clubs and skis to pay for their passage.

Most U.S. carriers began charging $25 this week for coach passengers who want to check a second bag on domestic flights — breaking from a longstanding policy of allowing two checked bags for free.

There are exceptions to the rule, mainly for first- and business-class passengers and for those with certain types of mileage rewards. And some airlines will waive the policy and the fee for international travel.

Each bag must weigh less than 50 pounds, and its dimensions (length plus width plus depth) must be less than 62 inches. For those who might consider beating the system, let's face it — there is no easy way to disguise a second checked bag as a carry-on or as your one "personal item." And because the change comes on the cusp of the summer travel season, donning extra layers in lieu of a second checked bag might get pretty uncomfortable.

But so is the prospect of forking over extra cash. In fact, six U.S. airlines also are raising the cost of checking a third bag to a whopping $100.

If those prices don't make you cringe, why not go all out and splurge for an extra seat like some cellists do for their priceless instruments? A few hours of quality time with your duffel in coach could also buy you elbow room — if you book the middle seat for your overstuffed companion.

For many faint-of-wallet travelers, however, the new charges are an unwelcome addition to fuel surcharges that are already factored into some ticket prices and reports of airline baggage unreliability.

Unclear How Flyers Will React

"The idea of having to pay for their bags when so many bags are lost or delayed is a huge problem," says Kate Hanni, executive director of the Coalition for an Airline Passengers' Bill of Rights. She says she hopes that any passenger bill of rights would eventually contain a baggage clause that would impose a civil penalty on airlines if they fail to reunite travelers with their baggage within 24 hours after landing.

Southwest remains the only major U.S. carrier to allow travelers to continue to check two pieces of luggage without charge. Previously, travelers could check up to three bags free of charge. The cost for checking a third bag on Southwest is now $25.

Airline and travel experts aren't yet sure how consumers will respond to the new checked-bag policies.

"People who bring less should be charged less," says Shannon Stowell, the president of the Adventure Travel Trade Association, which represents tour operators and some international airlines.

It is not uncommon to see passengers at terminals trying to magically transform three carry-on bags into one carry-on bag and a personal item. But try that with a golf bag or a pair of skis.

Some seasoned flyers may choose to ship unwieldy luggage to their final destination to avoid checking bags at the airport. "There's almost a cottage industry in the business of shipping sports equipment to destination resorts," says Michael Berry, president of the National Ski Areas Association.

The new fees are part of a menu of items that many airlines now charge for, including making reservations on the phone or in-flight meals or movies.

Much of these new costs are a direct result of rising jet-fuel prices in the United States.

"The checked baggage fee is definitely an ancillary revenue stream for these airlines to offset rising jet-fuel prices," says Morningstar senior equity analyst Brian Nelson. "These new fees are critical for their survival."

Carriers are struggling with "the most outrageous fuel prices in their history," says David A. Castelveter, a spokesman for the Air Transport Association, a trade group that represents several domestic airlines.

While airlines grapple with fuel costs, travelers may well be grappling with one another for precious carry-on space. Many people already haul on laptops and food for the flight, and Continental's Web site, for one, encourages passengers to carry on valuable items including "electronic equipment, cameras, film, cash, jewelry, medication, prescriptions and keys."

It could get ugly. And tiring. Travelers may want to check listings at the local gym for a carry-on cardio class.

Luggage manufacturers say many consumers are searching for lighter bags that don't take up too much of the airlines' weight allowance.

"Lightweight and durable is kind of the holy grail of luggage," says Ricky Schlesinger, executive vice president for Eagle Creek and the chairman of the Travel Goods Association, a trade group for the luggage business.

Manufacturers already have luggage solutions that consumers may find handy.

Rolling duffels have a lot of capacity and are increasingly popular, says Stewart Sherman, the vice president for marketing at Travelpro. Eagle Creek has a rolling duffel with a separate piece that zips onto the front — transforming the one bag to two.

And L.L. Bean has been redesigning its luggage line with lighter nylon fabrics.

Travelers should get used to weighing their bags before a flight, much like boxers weigh in before a fight. Otherwise, it may cost them.

Some retailers, including L.L. Bean, have even been selling luggage scales that are travel-friendly.

The new landscape for baggage is vast, so travelers' summer reading lists may need to include some airline Web sites.

Delta's site has a special section devoted to Christmas trees and antlers. Yes, you may check both items (special fees apply).

A note to Olympic track and field competitors: Delta won't check your javelin or vaulting pole. 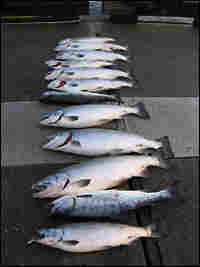 Southeast Alaska's waters are home to all five species of salmon, and each summer, sport fishermen from the lower 48 states flock to the area for charter fishing vacations. But when they return home, they don't just bring T-shirts or baseball caps.

Betty Rosenstein, an 86-year-old, retired educator from Los Angeles, has been fishing in Southeast Alaska for nearly two decades. Each summer, she takes her own cooler to bring back a portion of the salmon, halibut and other assorted fish that she catches during three days of fishing.

After her catch has been cleaned, vacuum packed and flash-frozen, it's delivered to the airport for her to take home. She checks all of it. Last summer, she says, that amounted to 81 pounds of fish.

"To have to pay for an extra piece of luggage won't end my fishing days," says Rosenstein, who has fished off the 27-foot boat Sitka Secret for many summers. Although this octogenarian angler said she would be "very annoyed" by the policy when Alaska Airlines implements it July 1, she said it won't stop her from taking all the clothing she needs to keep warm when she's out at sea.

During the summer, Alaska Airlines gets a lot of fish traffic from its airports in Ketchikan, Juneau and Sitka. Paul McElroy, a spokesman for the airline, estimates that during the peak season for sport fishing – from late July through August — nearly 200 fishermen fly each day from Ketchikan back to the lower 48 states and transport between 250 and 300 containers of fish in the cargo hold. On average, each container weighs about 50 pounds.

For flights inside Alaska – not originating or terminating in the lower 48 states, Alaska Airlines allows passengers to check up to three bags for free. McElroy says this policy was designed for rural Alaskans who rely on the airline for travel to larger communities within the state for shopping and medical services.