Accessibility links
For Prospective Moms, Biology and Culture Clash The average age of mothers is steadily rising as more women wait to have children until after attending college and starting a career. But how long is too long to wait? 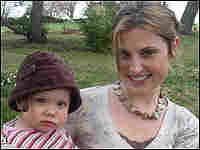 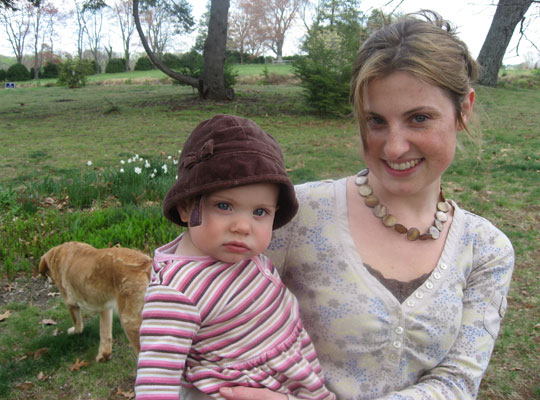 This Sunday is Mother's Day, a century since Anna Jarvis of Grafton, W. Va., petitioned Congress for a day of honor. Back then, American women were expected to marry young, stay home and have children. These days, more women take a meandering route to motherhood.

The average age of first-time mothers in the United States has been rising steadily over the past four decades — up from 21.4 in 1970 to a little over 25 in 2005, the National Center for Health Statistics reports.

That was the age at which Emily Scruby met her future husband, Michael Boggs, during a Katrina relief effort in Pearlington, Miss. They'd been living together for seven months when she found out she was pregnant.

"We tried to use condoms and be responsible," she says. Laughing, she adds, "But I have a baby."

Their daughter, Ayda, is now about a year old. The family lives near Charlottesville, Va. More women like Scruby Boggs say they are putting off childbearing to attend college and launch careers. But some experts see a tension between that societal trend and reproductive realities. Biologically speaking, the longer women wait to get pregnant, the more difficult it is to conceive.

Fertility seems to peak at about age 22, says Marcelle Cedars, director of reproductive endocrinology at the University of California, San Francisco. After that, it gradually declines, and past the age of 35, pregnancy is much harder to achieve.

Amy Harrison, of Norwell, Mass., has found that to be the case. At 38, she has a good job, a nice home and a husband who she thinks "will be a wonderful father," she says. "I finally feel like I'm ready to give a child or children a good home."

Her body isn't as ready. Harrison has endured fertility treatments for two years. "When I look at these people who get pregnant at a drop by accident ... yeah, it makes me very angry," she says, noting she'd wrongly believed she'd succeed as long as she began trying "by the time I was 38 or 40."

Pregnancy among older women brings increased health risks for both mother and child.

In 2002, the American Society for Reproductive Medicine tried an advertising campaign suggesting that U.S. women were running down their biological clocks. But critics, including the National Organization for Women, said it was alarmist and offered incomplete information.

Women may want to have the option of delaying motherhood. But Helen Fisher, a Rutgers University anthropologist, says biologically we're programmed to do what our prehuman ancestors did when they climbed down from the trees millions of years ago: reproduce.

Girls in hunter-gatherer societies probably did not reach puberty until 16 or 17, Fisher says. "They couldn't get pregnant. They were very thin. They got a great deal of exercise. It's thought that we were probably built to have about 10 years of practice at sex and love without the cost and risks of pregnancy.

"Women are no longer marrying the boy they met in high school," Fisher says. "They're concerned with getting a career before they marry. This takes time."

But this is time on the biological clock that cannot be recaptured.

Most U.S. mothers, including Scruby Boggs, have paying jobs. She says that she and her husband, Michael, share the household chores.

The family could get by on her husband's income, Scruby Boggs says, and she doesn't want to spend too much time away from daughter. But, she says, "I like contributing to our income, and I like the intellectual challenge of going to work and my job."

Scruby Boggs admits she might feel differently if she weren't able to work part of the time from home and rely on relatives for baby-sitting. "I leave Ayda with either of her grandmothers when I'm at work," she says.

"We're seeing more and more women working at home with the computer. We're seeing the rise of women in small businesses where they can control their time," Fisher says. "I think even the established business community is beginning to realize men and women were built to work together, so women can have their children when they're young and also sustain their career."

Fisher says this is how our ancestors operated millions of years ago — sharing the responsibilities for feeding, protecting and caring for children, ensuring the reproduction of our species.