Accessibility links
Muslim Chaplain Offers American Brand of Islam Maj. Khalid Shabazz is one of only five Muslim chaplains in the U.S. Army. Shabazz says it hasn't always been easy to be a Muslim in the military, and his faith has placed him under a microscope wherever he's been based. 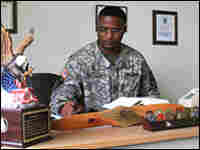 Maj. Khalid Shabazz in the office where he has served as Muslim chaplain for the past three years. Jamie Tarabay/NPR hide caption 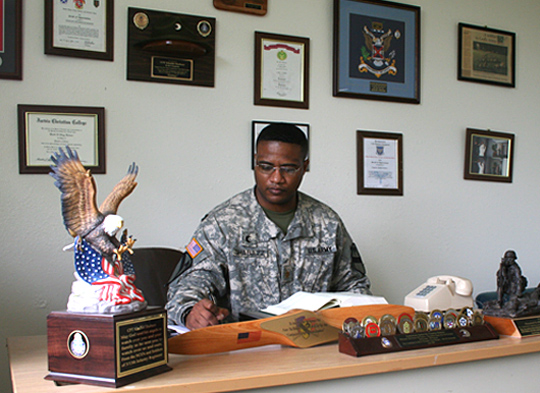 Maj. Khalid Shabazz in the office where he has served as Muslim chaplain for the past three years. 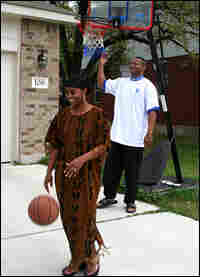 Shabazz and his wife, Rhonda, outside their home in Killeen, Texas. hide caption 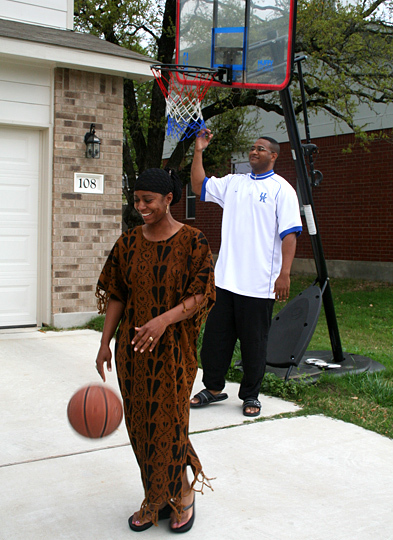 Shabazz and his wife, Rhonda, outside their home in Killeen, Texas.

There are about 1,300 chaplains in the U.S. Army, and of those, only five are Muslim. One of them, Maj. Khalid Shabazz, serves at Fort Hood in Texas and is getting ready to retire from his post to study ethics.

For three years, Shabazz has been the Muslim chaplain for the 1-227 Aviation Attack Battalion at Fort Hood. He's a big part of the religious life of the Muslim soldiers on base, and he offers them a very American brand of Islam.

His office is full of citations and awards thanking him for his service. But it was a different story when he first discovered Islam as an artilleryman 16 years ago.

For Shabazz, it hasn't always been easy to be a Muslim in the U.S. Army.

'A Gift From God'

He wasn't an officer when he joined the Army. He wasn't even a Muslim, and his name wasn't Khalid Shabazz. Once upon a time, a 23-year-old named Michael Barnes enlisted and was studying to become a Lutheran minister. When he changed his name after converting to Islam, not long after he enlisted, the howitzer unit he was serving with at the time went nuts.

"All [of a] sudden, it was almost like I switched sides to them," Shabazz says. "They were hurt because I converted. [They] thought maybe I was joining on to the enemy."

There are anywhere between 6,000 and 15,000 Muslim soldiers in the U.S. military, depending on whom you talk to. No one knows the numbers for sure because some Muslims in the military don't want to advertise their religion.

Shabazz says it's tough trying to be a good Muslim and a good soldier.

"Going to service on Friday when everyone else is at work, going to the field where all they were serving was pork, for 30 days, so most of the time I'd have to fast. It was getting tough for me," he says.

He was ready to quit. Then a Christian chaplain pointed him toward a different military career — becoming a Muslim chaplain.

He says that when the chaplain presented the idea, it was like "a gift from God."

He doesn't have to carry a weapon anymore, and he loves that.

But carrying the Koran, Islam's holy book, hasn't been easy either. It's placed him under a microscope wherever he's been based — Kosovo, Iraq and Guantanamo Bay, Cuba.

Shabazz, who hails from Louisiana, uses his Southern affability to help navigate his way through a lot of those challenges — that and an innate charm that can't help but make you laugh.

He jokingly believes Muhammad Ali, the boxing great, is his real father.

"We're the same height, same stature, same square head. My real father's going to kill me for this, but my mom was in Chicago in 1968."

Shabazz's wife, Rhonda, interrupts to point out he doesn't have any of Ali's money. As the chaplain's wife, she's also used to a lot of scrutiny. She doesn't always wear a head scarf and says people think she's making a fashion statement when she does. And she's used to raising eyebrows among the close-knit community of military wives.

She says that when she goes for coffee with some of the other Army wives, she is sure they have preconceived notions of what she'll be like and how they'll need to behave around her. But then they meet her, and they realize she's different from what they had thought.

Four years ago, Shabazz was posted to Guantanamo Bay. It was an assignment he was initially really excited about.

At first he figured he could spend time on "nice sunny beaches." But, he says, before he left he watched an announcement on CNN that he would be replacing James Yee, who was jailed for 76 days on charges of espionage and allegedly conspiring with Muslim detainees at Guantanamo Bay.

The charges were later thrown out, but whoever was going to take that job after Yee had to deal with the aftermath.

Shabazz was nervous, but his wife wasn't.

"Well, he does everything with ease most of the time," she says. Indeed, he's so relaxed that she doesn't think about how dangerous an assignment is until after he's accepted it.

"It's not until after he leaves that [I realize] he's going into a very hostile situation," Rhonda says. Then, she says, it hits her that "his job really is different from everybody else's."

And so is his approach. Shabazz is 6 foot 4, 240 pounds and a basketball nut. He soon appeared on Guantanamo's courts sweating alongside other servicemen.

Given the scandal over Yee, Shabazz and his commanders chose to limit his contact with detainees. He focused instead on the American soldiers, despite requests from some of the Muslim inmates to see him.

He did get involved at least one time with the military police, though.

"I would have to go down and chastise those guys," he recalls, telling them 'Hey man, those guys are praying. Have the decency not to play the national anthem and agitate them while they're praying.' Those were really awkward situations because you're almost seen as a sympathizer."

That's not how he's seen at Fort Hood.

Sgt. 1st Class Jamil Sabree says the roughly 40 Muslims at Fort Hood need someone like Shabazz. Shabazz's voice, his height, his "mere presence," Sabree says, have made a big impact on soldiers.

"You can't do nothing more but be like, 'OK, I'm feeling this message,' " Sabree says.

He says Shabazz helped him readjust to life at home after his extended tour, which included missing the birth of his son. Sabree has decided to leave the Army at age 39. He says he's not the only one to lean on Shabazz for support and advice.

"He's been there for all religions," says Sabree. "When soldiers come up to him, they're not just coming up because he's a Muslim chaplain. He's someone they can talk to."

And indeed that's how Shabazz wants people to see him.

It's a label he's stuck with, though. He'll be the only non-Christian in his new posting, where he'll be studying ethics, and no doubt will again be known as the "Muslim chaplain."