Accessibility links
Aid Groups Struggle to Help Myanmar Aid groups and donor countries are mobilizing to get assistance to the survivors of a devastating cyclone in Myanmar. The United Nations says hundreds of thousand people are in need of help. Getting visas and travel permission from the government of Myanmar is still a problem. The U.S. is among those trying to get in.

Aid groups and donor countries are mobilizing to get assistance to the survivors of a devastating cyclone in Myanmar. The United Nations says hundreds of thousand people are in need of help. Getting visas and travel permission from the government of Myanmar is still a problem. The U.S. is among those trying to get in. 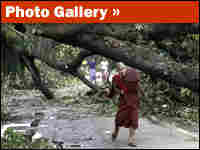 View a slideshow of the destruction

Government reports from Myanmar suggest the death toll there may be soaring above 22,000 people. Aid groups and donor countries are trying to get assistance to survivors of the devastating cyclone in the country also known as Burma.

The United Nations says hundreds of thousands of people are in need of help, but getting visas and travel permission from the country's repressive military government is still a problem. The U.S. is among those trying to provide aid.

NPR's Michele Kelemen reports on the complications of the aid effort.

MICHELE KELEMEN: Several days after a powerful cyclone swept through Myanmar, the UN's World Food Program has started to deliver rice it already had stockpiled in the country. WFP's Asia Director Tony Banbury said hiss agency is also just starting to get the access needed to ramp up operations.

Mr. TONY BANBURY (Asia Director, World Food Program): We've managed to get one visa today. We expect more visas tomorrow. Importantly, the government has accepted a WFP plane to go into Yangon tomorrow with emergency food aid - high-energy biscuits. And, that was an important test of the government's willingness to accept international assistance. They've agreed to let that plane in, and that's a very good sign.

KELEMEN: Speaking by cell phone from Thailand, Banbury said UN teams are trying to assess the situation in the hardest-hit area in Myanmar, the Iravati Delta, where entire villages are said to have been destroyed. Banbury said the UN knew well in advance that the storm would hit Myanmar, but no one predicted the scale of the disaster.

Mr. BANBURY: There was the extent of contingency planning for what it might do in the country and how the UN might respond. I think the destruction of the storm caught everyone by surprise. And the death tolls that are now being talked about, well above 20,000 are catching everyone by surprise, including the government.

KELEMEN: While Banbury says he sees signs of cooperation from Myanmar's military rulers, President Bush is trying to test that further. The U.S. is offering more than $3 million, now, and President Bush says he wants to do more.

President GEORGE BUSH: We're prepared to move our U.S. Navy assets to help find those who've lost their lives, and help find the missing to help stabilize the situation. But in order to do so, the military junta must allow our disaster assessment teams into the country.

KELEMEN: The teams are currently in Thailand waiting for visas to go to in Myanmar, also known as Burma. Joel Charny of Refugees International isn't optimistic about that, especially since both President Bush and his wife, Laura have been so critical of the junta in Myanmar. And the president, just today signed legislation giving Burmese opposition figure Aung San Suu Kyi a congressional medal of freedom.

Mr. JOEL CHARNY (Refugees International): Yeah, we have a mix of political and humanitarian messages, and I think, overall, the Burmese government is unfortunately, unlikely to respond positively to allowing a U.S. team and to assess the situation.

KELEMEN: Refugees International is urging the U.S. to play it straight, not look for political openings, but simply respond to the humanitarian crisis. He thinks that will make it more likely that aid groups on the ground will be allowed to expand their operations. Charny was in Myanmar earlier this year to report on the humanitarian situation and says there are 10 UN agencies and 48 relief and humanitarian groups already in place.

Mr. CHARNY: The government is very controlling, and there are restrictions placed on the agencies, but I think outsiders really do underestimate both the number of agencies and also the scope of their programs. Yeah, there's international work going on now, in practically, the entire country. You know, this isn't North Korea, I guess it's what I'm trying to say.

KELEMEN: He says some of the smaller groups may not have the capacity to respond to the latest emergency, but he said there are plenty of groups the Bush administration could support even if U.S. aid officials can't get on the ground.

Learn more about Myanmar, formerly known as Burma, and its government 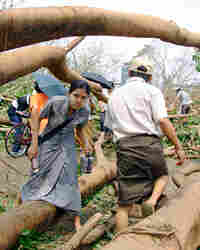 Locals make their way past a fallen tree in Yangon, Myanmar, one day after a devastating cyclone hit the area Saturday. The death toll has continued to rise since then. hide caption 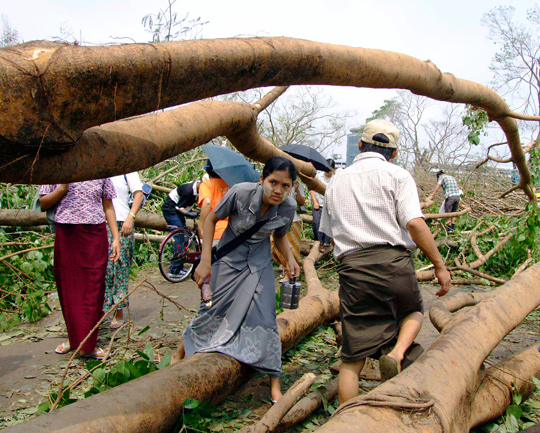 Locals make their way past a fallen tree in Yangon, Myanmar, one day after a devastating cyclone hit the area Saturday. The death toll has continued to rise since then.

World Vision, one of the few aid agencies with people working in Myanmar, has offered a few hints at the aftermath of a deadly cyclone there, describing piles of bodies and a massive rice-growing region devastated.

Myanmar officials said Tuesday that at least 22,000 people are dead and hundreds of thousands are homeless after the storm hit Saturday.

The nation formerly known as Burma has suffered much more from the cyclone than it did from the tsunami a few years ago, when it was spared the full force of the giant waves that killed hundreds of thousands elsewhere.

NPR's Michael Sullivan, who is tracking the story from Bangkok, tells Steve Inskeep that teams are still on the ground assessing the damage.

"We just don't have any clear indication yet about what the real situation is, but we know of course that it's dire for many people," Sullivan says. He is reporting from Bangkok because Myanmar's secretive military government — which had planned a controversial vote on a new constitution May 10 — has not let any journalists into the country yet.

The very low-lying landscape of Myanmar was inundated by a 12-foot wall of water generated by the cyclone, Sullivan says. Burmese officials in the capital Tuesday said that wave, not the cyclone itself, caused most of the casualties in villages near or along the ocean, Sullivan says.

Aid agencies have offered to help, and the government has reportedly accepted the offers, but there are no reports of aid agencies getting new people into the country, or receiving shipments of food, water or portable shelter, Sullivan says. They have been transporting what they already had in country.