Accessibility links
Listening In On A Bat Cave Four of New York's six species of hibernating bats are suffering from "white-nose syndrome," which is decimating bat populations throughout the Northeast. Biologists from New York's Ulster County go underground as they try to work out what is killing the bats.

Listen
Listening In On A Bat Cave

Jim Metzner has been training scientists to make audio recordings of their field research. Biologists from New York's Ulster County go underground as they try to work out what is killing the region's bats. 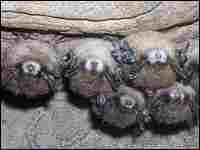 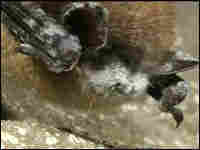 VIDEO: Visit an abandoned mine where bats are dying

What is white-nose syndrome? White-nose syndrome refers to a white fungus on the noses of many affected bats. The fungus may be a symptom and not the cause of the bat deaths observed to date. Affected bats do not always have the fungus, but may display abnormal behaviors.

What are signs of white-nose syndrome? The disease may be associated with some or all of the following:

• bats with white fungus on the nose, wings, ears and/or tail;

• bats clustered near the entrance of caves or mines or in areas not normally identified as winter roost sites; and/or

• dead or dying bats on the ground or on buildings, trees or other structures.

What should cavers know and do? Officials request that cavers observe all cave closures and advisories and avoid caves or passages of caves containing hibernating bats. The Fish and Wildlife Service discourages cavers from systematically searching for bats with white-nose syndrome. Read recommended precautions.

Does white-nose syndrome pose a risk to human health? The disease is in caves and mines that have been visited by thousands of people during the past two years, yet there have been no reported illnesses attributable to the syndrome. However, because scientists are still learning about the disease, the potential risk to humans from contact with affected bats is not fully understood, and federal wildlife officials say they "are not prepared to advise you about human health risk." As a precaution, people should use protective equipment when entering caves or handling bats in the Northeast.

A deadly disease that has ravaged bat populations in the Northeast is spreading faster than expected, according to federal researchers, who have confirmed fresh outbreaks of "white-nose syndrome" in Connecticut and eastern Vermont.

The scientists also suspect that the illness may have infected caves in Pennsylvania, and they worry that entire species of bats could be wiped out in affected areas.

White-nose syndrome was first reported in late 2006 in caves in Albany, N.Y., where as many as 11,000 bats died. More than three months ago, researchers confirmed that the disease had infected bats elsewhere in New York as well as in Massachusetts and western Vermont — killing 90 percent of the animals in some caves.

But little progress has been made in understanding the mysterious disease, dubbed white-nose because the muzzles of some bats are covered with a white fungus, and how it spreads.

"We are still in the dark with what this is," says biologist Susi von Oettingen, of the U.S. Fish and Wildlife Service.

There have been no known incidents of the disease affecting humans, the agency says.

Bat Populations in Other States at Risk

Scientists were hoping that the outbreak would burn itself out — or be limited to small pockets of remote caves. But the disease seems to be affecting every species of bat in the areas where it has been found, and the rash of new sites confirmed at caves in Connecticut and suspected in Pennsylvania has dashed that optimism.

Von Oettingen says the fear is that "white nose" could spread quickly into core habitats as far away as Ohio and Virginia, potentially decimating populations of endangered Indiana bats.

"If we knew that it was an environmental factor that was unique to the Northeast, then maybe we wouldn't have to be concerned," she says. "But because we don't know, we really do have to watch those adjacent states very closely."

Scientists don't know that much about the diseases that affect bats, and this outbreak is proving especially puzzling. Some of the dying animals have a crust of white fungus on their noses, while others look emaciated or disoriented.

Researchers looking for clues are scrambling to dissect hundreds of infected bat carcasses, and volunteers are working to try to keep some of the ailing animals alive.

Kathy Larrow is an amateur wildlife rehabilitator in Hudson Falls, N.Y., who has converted a bedroom in her home into a makeshift clinic. As she prepares to feed a tiny bat, the animal crawls awkwardly, using its delicate, leathery wings.

"We've got to get some extra food into him," Larrow says.

Two of Larrow's bats have already died, but three others seem to be gaining strength.

Environmentalists say the efforts of volunteers like Larrow are a sign that government agencies haven't moved fast enough to protect these animals — especially endangered Indiana bats.

Despite white-nose syndrome's rapid spread, the Fish and Wildlife Service still hasn't appointed a full-time employee to coordinate the response.

Earlier this month, a coalition of environmental groups threatened to sue the federal government under the Endangered Species Act if more action isn't taken.