Accessibility links
Lab-Grown Meat a Reality, But Who Will Eat It? A handful of scientists are now culturing meat from animal muscle cells, but don't look for it at the supermarket anytime soon. Costs are high, production models are nonexistent and few carnivores are clamoring for an alternative.

Listen
Lab-Grown Meat a Reality, But Who Will Eat It? 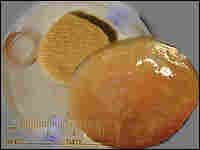 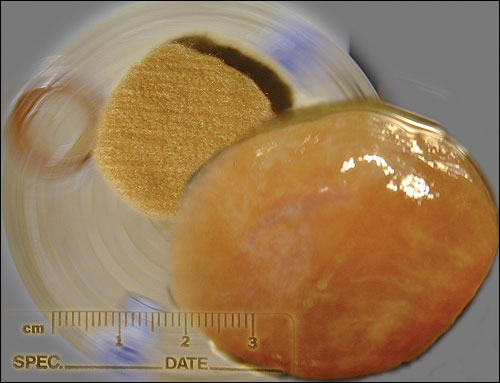 The "semi-living steak" (right) was made of embryonic sheep muscle cells that were grown on a polyester scaffold (left) for more than two months. This research was done in 2000 by the artists/researchers Oron Catts and Ionat Zurr, as part of their project Tissue Culture & Art.

Countless families are familiar with the domestic challenge of vegetarians and meat eaters living under one roof. Vegetarians often find the mere presence of meat repugnant; meat eaters prefer their wings and ribs seasoned without guilt. But these days, as "mixed" households explore their dietary options, a handful of scientists are cooking up what might be a possible alternative: meat grown in a lab.

Though the idea of growing animal parts in a lab rather than on a farm has been around for a century, it has never seemed like a good time to talk about man-made meat. But the concept has had some famous proponents, including Winston Churchill in his 1932 essay "Fifty Years Hence": "We shall escape the absurdity of growing a whole chicken in order to eat the breast or wing, by growing these parts separately under a suitable medium."

Churchill was likely inspired by the work of Alexis Carrel, who at the time of Churchill's comment had been keeping alive a cultured piece of chicken heart tissue for 20 years. The Nobel Prize-winning scientist kept his experiment small, but it fed many an imagination, including that of author Frederik Pohl.

Pohl wrote the 1952 sci-fi novel The Space Merchants, in which tissue-cultured meat gets a starring if inglorious role — it's the starter ingredient for an ever-growing lumpen food source known affectionately as Chicken Little.

"Actually, when Cyril and I wrote the book, I thought we would see much of it actually happening," he says.

The Complexity of Meat

Meat isn't being cultured on the scale of Chicken Little yet, and because most carnivores don't spend much time worrying where their meat comes from, there hasn't exactly been a public demand. But there are in fact scientists who, despite little acceptance of what they do, are working this very minute to grow tissue-cultured meat.

It's happening in labs from Norway to North Carolina, and it's being done exactly the same way patches of human skin are already grown. All that takes is a skin cell marinated in a nutrient-rich concoction. Within a few weeks, it's pretty much ready to wear.

But British biologist Brian Ford, author of The Future of Food, says meat has always been a more difficult proposition.

"Meat is a complex mixture of tissue," he says. "Under the microscope, you can see all sorts of gristly bits and fatty bits and muscly bits. ... It's this sort of mosaic of different cell types that changes cells into what we know as meat — and that is a problem that nobody has successfully, as yet, addressed."

But somebody is getting close.

Food of the Future?

Vladimir Mironov, a biologist at the Medical University of South Carolina, is among a handful of scientists culturing meat from animal tissue. His work involves turning formless, textureless patches of the stuff into mass-produced form — like meat sheets, or what one might affectionately call "shmeat."

"I personally believe that this [is the] inescapable future," he says.

"Technology, I think, is doable, and if you have reasonable investment it can be done. But ... you can't create [a] product which nobody wants to buy or is too expensive to buy. So the right timing ... is everything," he says.

So is this the right time? One unlikely nonprofit thinks so: People for the Ethical Treatment of Animals. PETA recently announced a $1 million contest to create commercially viable chicken meat, sacrificing neither chicken nor egg. The deadline is 2012, the contest rules Herculean and the prize money paltry. But the thinking is pragmatic: If people must have meat, and factory farming is an animal nightmare, why not find a high-tech alternative?

Peter Singer, author of the 1975 treatise Animal Liberation, is all for it.

"I always thought it would be a good thing," he says. "The same way that I think it's good that the abuse of horses for pulling loads has ended. ... I think it would be good if the abuse of animals for raising them for meat were to end, because we had a technological solution to that. We had an alternative."

But molecular biologist Margaret Mellon from the Union of Concerned Scientists disagrees.

"Tissue-cultured meat just doesn't make sense to me," she says. "I think it's a very bad idea."

Mellon believes that all our food should be grown lightly on the land, using the riches of the Earth and the power of the sun — not in a factory.

"Picture it: You've got a big compound of buildings with scientists running around tending big vats of cultured cells, making sure that they're all at a constant temperature, that the cells are being kept sterile," she says. "I mean, where does that energy come from? That's a lot of fossil fuel."

So, to recap the opinions on the state of shmeat: It's animal-friendly but bad for the environment; we have the how-to, but not the how-come; unleashing unknown technologies is fodder for nightmares.

And at least one carnivore thinks it's real meat.

Which brings up one last point: the taste of shmeat. Like chicken, right? Not so, says a source who has sampled tissue-cultured turkey. It tasted like turkey.