Accessibility links
Old Drug Offers New Hope for Marfan Syndrome New evidence indicates that the connective tissue disorder, which can be deadly, may be treatable with a common blood pressure drug. 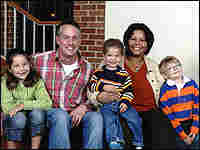 Blake Althaus (right) was diagnosed with Marfan syndrome as an infant. Above, he poses with his family (from left): Jenna, Joe, Chase and Anita Althaus. Courtesy of Anita Althaus hide caption 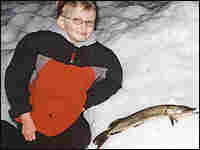 Like other kids his age, Blake loves to be active. Here he poses with the northern pike he caught on an ice fishing trip with his dad. Courtesy of Anita Althaus hide caption

We tend to think we know what most pills in our medicine cabinet do. But sometimes a drug approved to fix one thing also turns out to fix something completely unexpected.

That may be the case with a common blood pressure-lowering drug called Losartan. It's been on the market for more than a decade and has been taken by millions of people.

Now it looks as though the drug also could be a powerful tool for a deadly genetic disorder called Marfan syndrome. About one or two of every 5,000 Americans are thought to suffer from the illness, according to the National Marfan Foundation.

Although caused by a defect in a single gene, the disorder wreaks all kinds of havoc. It alters the connective tissue between cells and can affect the skeleton, the eyes, the lungs. Most dangerously, the aorta — the main artery coming out of the heart — can weaken, enlarge and burst. People with Marfan syndrome are generally tall, thin and loose jointed, which has led some to speculate that Abraham Lincoln had the disorder.

The poster-child for the promise of Losartan is a boy named Blake Althaus, who is 5 1/2 years old and quick with a joke. ("Why couldn't the 10-year-old go to see the pirate movie?" he asks. "Because it was rated Aaaarrgh!" he says, dissolving into laughter.)

When Blake was born, his parents noticed he had long legs and long fingers. "They were spidery," his mom, Anita, remembers. Months later, after some tests, doctors told Anita and her husband, Joe, that Blake had Marfan syndrome.

And the diagnosis became more worrisome with subsequent visits. Every time Blake's parents took him to the doctor, they learned that his aorta had gotten bigger. This usually doesn't occur in people with Marfan syndrome until later in life, but it is the disorder's most life-threatening aspect.

"It was devastating," Anita says. "We would leave the appointment and we'd just feel like our whole world was ending." It seemed Blake would likely need heart surgery.

But the family's doctor, Hal Dietz at Johns Hopkins University who specializes in Marfan syndrome, had been looking for new treatments that wouldn't require surgery. Recently, he and his colleagues have focused on a protein called TGF-beta that seems to be too active in people with Marfan syndrome. When his team studied mice that had a version of the disorder, they found that blocking TGF-beta allowed the aorta to develop normally.

"It was really one of the happiest days in my professional life," Dietz says of his discovery.

It generally takes years to develop a drug. But Dietz went to his computer, pulled up Google, and typed in "TGF beta-blocking drug." Up popped references to a drug called Losartan, which was on the market as a blood pressure medication but also happened to be very good at stopping TGF-beta.

Dietz says it would have been hard to design a better drug. "Losartan has been used to treat tens of millions of people with high blood pressure," he says. "It's known to be an extremely safe and well-tolerated medication."

As a test, his team gave Losartan to mice with Marfan syndrome and it seemed to fix the aorta problems. Normally, a new drug must be safely tested on humans, which can take years. But because Losartan was already in pharmacies, Dietz could just write a prescription for it.

He felt he had to offer it to his most desperate patients, so he talked with Blake's parents, who were eager to give it a try. Blake started taking Losartan, and for the first two years, his aorta showed no new abnormal growth. Anita says his muscle mass improved and that Blake started running around like other kids and riding a Big Wheel.

Not a Perfect Drug

Dietz says he cautions patients that the drug might not work for everyone and that he doesn't think it will fix everything. But at the same time, things look promising.

Dietz has not yet published his patients' results in a peer-reviewed journal. But several top experts interviewed for this story agreed that so far the prospects for treating the disorder with Losartan look exciting.

Cardiologist Anji Yetman, who runs a University of Utah clinic for people with Marfan syndrome, says she has reservations.

"I don't believe we have found a miracle drug for Marfan syndrome," she says. "I think we found a drug that may be highly effective, but there have been patients with Marfan syndrome on Losartan who unfortunately have gone on to develop ... tears in their aorta requiring urgent surgery."

Yetman says a different type of blood pressure medication, called an ACE inhibitor, may work as well or better than Losartan. She says she has put many of her patients on it.

Putting Losartan to the Test

The way to find out what Losartan does and doesn't do is through a careful clinical trial where some people are given the drug and some are given something else, and then the two groups are compared.

That's what's happening now. The National Institutes of Health has started enrolling people in a clinical trial. There was some concern that people with Marfan syndrome would just start taking the drug on their own, but the NIH says enough people seem to be enrolling. So far more than 200 people have signed up, and the NIH is hoping for about 600.

Dietz says he tells his patients that the trial is the only way they can really see what the drug does, find the right dose and identify any side effects.

After a few years of taking Losartan, Blake is doing well. He runs with the other kids, though not quite as fast. His mom says that one morning he asked if maybe new shoes would help him go faster.

"I ended up crying that whole afternoon while he was at school," Anita says. It was hard, she says, watching him realize he was a little different.

Then when she picked him up from school, she recalls, "he said 'Mom can you take me shopping so I can get new tennis shoes so I can run fast? I'm always the slowest guy.'" Anita told him that Marfan syndrome made his ankles a little loose, so running would be hard. But she also told him he was the best fisherman she had met in her entire life. "I am?" he asked, his face lighting up.

In the past year, Blake's aorta has grown a bit, his mother says. It's not an emergency, but his doctors are watching it.

More information on the Losartan clinical trial
NIH: What is Marfan syndrome?