Accessibility links
Gypsy Jazz: From Reinhardt to Rap Decades after the death of Django Reinhardt, his music is flourishing and evolving in Roma musical communities all around the world. Hear an interview with Michael Dregni, author of a new book on Gypsy swing.

In 2004, NPR's Talk of the Nation interviewed Michael Dregni about his biography of Django Reinhardt: 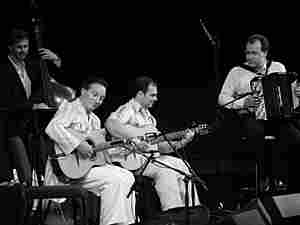 From the Gypsy camps outside Paris to the clubs of New York, it's still the ultimate outsider music.

Gypsy jazz came to prominence in the 1930s with guitarist Django Reinhardt. But it isn't just the name of a style; it's practically a lifestyle. Michael Dregni, author of the new book Gypsy Jazz: In Search of Django Reinhardt and the Soul of Gypsy Swing, joins John Schaefer to talk about the phenomenon.

Gypsy Jazz is actually Dregni's second work on the subject. Whereas his first was a biography of Django Reinhardt, Dregni's new book examines the broader scope of Roma musical communities up until the present day.

"Well, you know I think it's interesting, because this is music that is still being formed, and I've tried to tell this history in sort of the only way I could," he says. "Of traveling around to the Gypsy bars and encampments and religious pilgrimages in France, and chronicling this music basically as it's taking place today, with oral histories and seeing the music being played live. 'Cause so little of it is actually recorded — so little of the history has been written down — that we're kind of here at the formation of the music now, even though it started in the '30s."

A Gypsy himself, Reinhardt is hailed as a pioneer of the guitar, one of the first to use it as a solo lead instrument. Musicians around the world continue to recognize his unique virtuosity and jazz stylings.

But years after Reinhardt's death, Dregni says the music continues to evolve dramatically today. Some remain purists to the acoustic sound of early Django; others have embraced the electric guitar and bebop styles; still others are performing what Dregni calls "Gypsy jazz rap."

According to Dregni, Reinhardt himself tried to be "American" in his playing, and only later in his career was his music described as Gypsy swing. It has since become a point of pride in Roma communities.

"Since his death in 1953, many Gypsies have taken up this music as music of their own, and it has become kind of a cultural heritage since then," he says.

Dregni says that even though Reinhardt was the primary force behind Gypsy jazz, the music has long outlived him. His bandmates, many of whom were also Gypsies, continued to play his music, slowly adding their own unique interpretations to the mix.

"And they kind of continued it, passed it along to future generations both in recordings and playing it live, to the point where even today, many European Gypsies learn this music as youngsters," Dregni says. "As soon as they are able to fret guitars, they are taught Django's music on guitars."

Today, even after Django's innovations have long since settled into mainstream musical culture, Roma communities continue to fervently support the music. Gypsy musicians like guitarist Bireli Lagrene continue to rise to international fame, and others are making their mark in music scenes around the world.

"There's a lot of this music being played in Paris, where it began," Dregni says. "But there's also music — there's bands, Hot Club bands all around the world."