Accessibility links
Costs Up, So Dry Cleaners Want Their Hangers Back Wire hangers have become more expensive since the government set import tariffs on cheaper hangers from China. Dry cleaning operators nationwide are asking customers to return their hangers to help keep costs down.

Listen
Costs Up, So Dry Cleaners Want Their Hangers Back 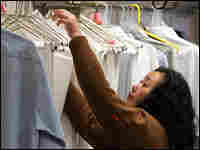 A worker checks a rack of clothes at a San Francisco dry cleaner on Jan. 29, 2007. Justin Sullivan/Getty Images hide caption 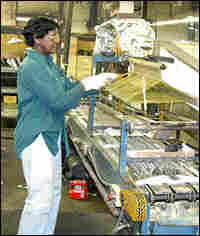 Selma Boyd, a 38-year employee of M&B Hangers, packs hangers at the company's plant in Leeds, Ala. The company filed a complaint with the U.S. Commerce Department that resulted in import tariffs on Chinese-made hangers. Courtesy M&B Metal Products Co. hide caption 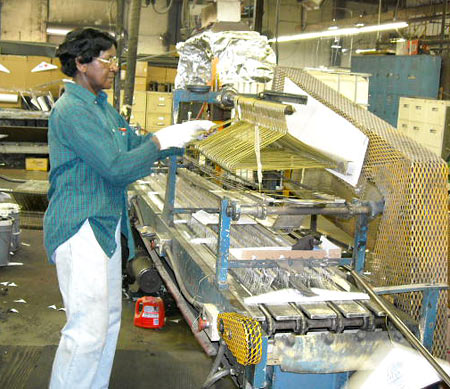 Selma Boyd, a 38-year employee of M&B Hangers, packs hangers at the company's plant in Leeds, Ala. The company filed a complaint with the U.S. Commerce Department that resulted in import tariffs on Chinese-made hangers.

If you think your dry cleaning bills are high now, hang on. Wire hangers are getting more expensive due to import tariffs on cheaper hangers from China. So dry cleaning operators are asking customers to return their hangers to help keep costs down.

At Monarch Cleaners in Birmingham, Ala., customer Don Kirkpatrick strolls in clutching dirty shirts in one hand and a bunch of wire hangers in the other. He uses wooden hangers at home and says he doesn't care for the wire variety.

They are "pretty much useless," Kirkpatrick says. "There wasn't enough of them to try to give them to an iron or steel scrap person. It just didn't weigh enough to make any sense, so I just literally threw them away."

But at Monarch, they are a dry cleaner's treasure. On the counter is a stack of fliers urging customers to return hangers on their next visit. Across the United States, dry cleaners are begging people to do the same.

A Flood of Imports

A flood of cheap Chinese hanger imports in recent years has forced all but one major U.S. hanger manufacturer out of business. M&B Hangers in Leeds, Ala., hung on.

M&B President Milton Magnus III complained to the U.S. Commerce Department that Chinese manufacturers were dumping hangers well below market value. In March, the government responded by imposing a tariff on all wire hangers from China.

"I had almost come to the realization that we couldn't make hangers in this plant anymore," Magnus says.

Today, M&B is thriving. It makes more than a million hangers a day, and Magnus expects to double his work force in two years. But that still isn't enough to meet the demand.

Since the tariff was imposed, nearly every dry cleaner in the U.S. has had to pay more for hangers, on average about $4,000 a year. But Magnus says most customers probably won't notice it.

Bill Fisher is an analyst with the Drycleaning and Laundry Institute, an industry trade group. He says a number of former U.S. hanger manufacturers have made a comeback since the tariff ruling. One company has reopened a plant in Wisconsin and opened another in California. But he says it's a mixed bag.

"It will certainly result in competition," Fisher says. "I would be very surprised if it drove prices down. The bottom line is cleaners are really struggling right now."

At Monarch Cleaners, owner Mark Dichiara says he goes through 2,000 hangers a week and that he's doing anything he can to save money.

"I don't mind getting free hangers," Dichiara says. Customers are "giving me what they consider to be garbage. [If] somebody brings me in a box full of hangers, that's like putting $10 on the counter before they even do business with me."

And that's a cost he won't have to pass on to customers.