Accessibility links
Cuba Bars Blogger from Accepting Award in Spain Last year, Time magazine named Raul Castro one of the 100 most influential people in the world. This year, another Cuban has taken his place: Yoani Sanchez. Her critical blog also earned one of Spain's top journalism prizes, but Cuban officials denied her a visa to go to Spain to accept it. 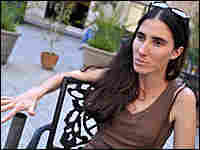 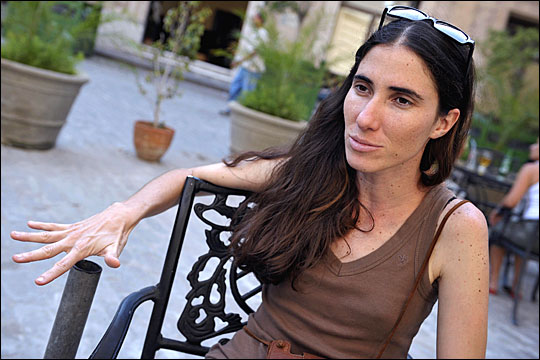 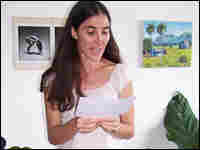 In her Havana apartment, Yoani Sanchez reads the acceptance speech she was unable to give in Madrid on Wednesday. She won Spain's Ortega y Gasset prize for digital journalism in recognition of her blog. Tom Gjelten, NPR hide caption

Time magazine last week named its picks for the 100 most influential people in the world. Raul Castro made the cut in 2007 as Cuba's acting president. This year, there's a different Cuban on the list. Yoani Sanchez, 32, has gained a worldwide following for the independent blog she writes from Havana. On Wednesday, Sanchez earned a top prize in Spain for digital journalism — or, so she was told. Cuban authorities did not let her go to Madrid to accept the award.

In her blog, Sanchez makes sharp, often stinging, observations about daily life in Cuba. When a massive throng of Cuban workers marched through Havana last week for the May Day parade, many outsiders might have been impressed by the turnout. But Sanchez took note of something the outsiders probably missed. The workers' banners, proclaiming support for the Cuban revolution, were professionally produced.

"If they'd left it to the workers to make their own signs," she wrote,"they might have said something else."

It was the kind of wry comment that many weary Cubans could appreciate.

"Politically, we can't do much. It's hard for citizens to communicate with each other here. The news media are all in the hands of the state. People are afraid," Sanchez says. "What we're trying to do is to get people to reconnect to each other as individuals, as citizens. This is what I like to write about in my blog. I'm not a political analyst. I'm not even a journalist. I speak as a citizen, from her daily experiences and her reflections on her country and her community."

Sanchez calls her blog "Generation Y," named, she says, for young Cubans like herself whose parents gave them names beginning with the letter Y, which was fashionable when they were born in the '80s.

The criticism of Cuba's system that runs through her writing is not so much political, she says, as it is "generational and personal," revealing the interior of the Cuban experience.

The boldness with which she writes comes partly because she spent two years living in Switzerland. She left Cuba, she says, because she was exhausted by the tension of life under a totalitarian system. But in Europe, she was impressed by the exiles she met who dreamed of going back to their native countries; that made her think about Cuba and what might be possible there.

"I also learned to listen," Sanchez says. "Cuban society is lacking in debate. There, I was in a place where people actually tolerate other opinions, where you don't get thrown in prison for having other ideas."

She says one of her missions is to civilize the discourse in Cuba, to oppose what she says is a tendency among Cubans to denounce each other with ugly names, engaging in what she calls "verbal violence." She thinks one reason she hasn't been directly harassed by the government in spite of her critical commentaries is because she writes respectfully.

"When we refer to the government, that's what we call it — the government. When we talk about Fidel Castro, we say, Senor Fidel Castro. We don't speak with aggressive terminology. The weaknesses of the system are made clear by arguments, not by hyperbole," she says.

The Internet, Sanchez says, is the perfect place for someone like her to write, because it's uncensored. But in Cuba, there's another problem: The government blocks the Internet for the general population. Barely 2 percent of Cubans can access it. If Sanchez has many readers in Cuba, it's partly because people who are able to read her columns download them onto a flash drive and share them with others.

Lately, she hasn't been able to get onto her own blog. Friends post her texts and e-mail her the comments that follow.

On Wednesday afternoon, Sanchez gathered with her husband and friends in their Havana apartment. It was Wednesday evening in Madrid, where she was supposed to be receiving the Ortega y Gasset prize for digital journalism. But her request to travel to Spain to accept the award was not approved by the Cuban authorities; they are clearly annoyed by the attention her critical writing has received.

Sanchez had to send a tape-recording of her acceptance speech. At the very hour she would have delivered it in Madrid, she read the speech to her friends in Havana.

"The fact that I am not there is more revealing of the Cuban reality than all of the posts I have written in my blog in all these months," she said. "But some day, it won't take courage to put down in writing all these things we are living today."