Accessibility links
'Speed Racer' Film a Far Cry from Its Anime Roots The movie Speed Racer opens Thursday. It's based on the Japanese animated series that was a hit with American kids in the late 1960s. The movie is directed by Larry and Andy Wachowski, who directed The Matrix.

The movie Speed Racer opens Thursday. It's based on the Japanese animated series that was a hit with American kids in the late 1960s. The movie is directed by Larry and Andy Wachowski, who directed The Matrix.

In the late 1960s, there was a popular cartoon called "Speed Racer." It had a really different style. The characters looked like real people. There was more suspense. It was even a little dark. This weekend, Warner Brothers is hoping kids will race out to see its new movie version of "Speed Racer."

NPR's Elizabeth Blair reports that the original "Speed Racer" was the way a lot of young Americans were introduced to Japanese anime.

ELIZABETH BLAIR: Speed Racer had everything - a dad who built racecars, a nice mom who let his little brother keep a pet monkey, a cute girlfriend and an unbelievably cool car.

Mr. PETER FERNANDEZ (As Speed Racer): These are the controls of the most powerful and amazing racing car in the world, the Mach 5.

Mr. FERNANDEZ: Control A releases powerful jacks to boost the car. Control B -press this button and the Mach 5 sprouts special grip tires for traction over any kind of terrain.

BLAIR: Roland Kelts is the author of "Japanamerica: How Japanese Pop Culture Has Invaded America."

Speed Racer is anime - the animated form of Japanese graphic novels, which really became popular in the 1990s. Kelts says those seven buttons on Speed Racer's car back in the '60s are typical of anime.

Mr. KELTS: There's a real emphasis on specific details, and the correlation of devices or gadgets to something that actually happens.

Mr. FERNANDEZ: Control G releases a homing robot from the front of the car. The homing robot can carry pictures or tape recorded messages to whomever and wherever I want to send them.

BLAIR: "Speed Racer" was originally created in Japan by Tatsuo Yoshida, with help from his two brothers, in the 1960s. A distribution company in the U.S. bought the show and hired Peter Fernandez to adapt it for American audiences. He also worked on the Japanese anime shows "Gigantor" and "Astroboy." But he says "Speed Racer" was different.

Mr. FERNANDEZ: The animation was much more realistic. The characters had a relationship that I'd never seen before in any cartoon series. And it was all about cars.

Mr. FERNANDEZ: You won't get away with them. (unintelligible) take the wheel.

Mr. FERNANDEZ: Now give me those plans.

BLAIR: Peter Fernandez says he wasn't given a lot of instruction on how to transform the show for American TV. The first thing he did was change the title. The Japanese version was called "Mach, Go, Go, Go." So Fernandez came up with the name "Speed Racer." He hired just three other actors for the voices of dozens of anime characters, and gave himself the two best parts - the dashing Speed Racer…

BLAIR: And Racer X, the mysterious masked racer who was really Speed's brother.

Mr. FERNANDEZ (As Racer X): Don't worry, I'll be able to handle them. With everybody pulling dirty tricks, to win the race will be very tough.

BLAIR: Fernandez said he had a lot of fun coming up with American names for the anime villains, like Acey Deucey, Snake Oiler and Cruncher Block.

Mr. FERNANDEZ: You know, he was a big block of a guy, so Cruncher Block seemed suitable. And then I knew what he should sound like. He sounded like this. Now, watch it kid. I'll - never mind what I'll do. Anyway, that was me.

Mr. FERNANDEZ (As Cruncher Block): I always get hungry when I'm up to skullduggery. Give me a sandwich.

BLAIR: When people write about "Speed Racer" today, they often mention how Japanese it seems. But it turns out Tatsuo Yoshida created "Speed Racer" with the American market in mind, says author Roland Kelts.

Mr. KELTS: Yoshida was heavily influenced by American culture, as were many of the artists of his generation. He was a child during World War II and obviously survived the war and grew up with this influx of American popular culture, everything from television shows like "Father Knows Best" to comic books, many of which were brought over by the GIs.

BLAIR: There's a reason Speed Racer looks a little like an anime Elvis with the pompadour hairstyle and scarf around his neck. Kelts says Yoshida modeled Speed after Elvis Presley in the movie "Viva Las Vegas."

BLAIR: The music for the new "Speed Racer" movie was composed by Michael Giacchino, who says he was a huge fan of the original, including that infections theme song written by Nobuyoshi Koshibe.

Mr. MICHAEL GIACCHINO (Film Composer): I used to love during the most difficult moments that Speed faced, you could always be sure that whenever it was that the tide was turned in his favor, you would hear this bum, bum, bum.

Mr. GIACCHINO: And it used to just jazz me up so much as a kid. I remember my brother and I would jump up on the sofa whenever we heard that, because that was like, OK, he's going to do it. He's going to do it.

BLAIR: As part of his research for the new movie, Giacchino went back and listened to the music that was used in Japan for "Mach, Go, Go, Go."

Mr. GIACCHINO: It's very different from the one that ended up in the show here in America. Now the melody is essentially the same, but the arrangement is vastly different. So whereas in Japan, you were listening to this almost kind of weird Western-type of song sung by Japanese men, here in America, we were listening to something that was turned into almost like a surf tune.

Unidentified Group: (Singing) Here he comes, here comes Speed Racer. He's a demon on wheels. He's a demon and he's gonna be chasin' after someone.

BLAIR: The new "Speed Racer" movie was directed by the Wachowski brothers, who almost never give interviews. But they, too, loved the 1960s show.

Mr. GIACCHINO: Their intention was let's just take what we loved about it as a kid and then just blow it up to as big as we can. That went for the song as well and the score, so that when any fan heard it, they felt like they were watching "Speed Racer."

BLAIR: Fans of the original might be a little overwhelmed by the new "Speed Racer" movie - the racetrack, the gadgets, the villains, the speed, everything about it is much more intense than that quaint little anime cartoon from the 1960s. 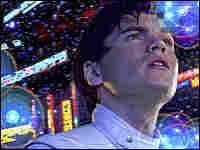 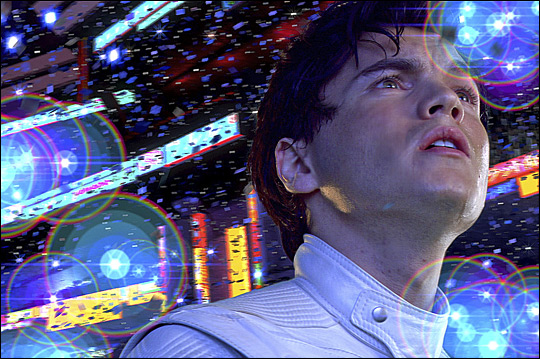 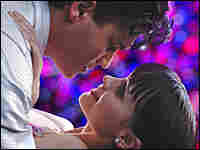 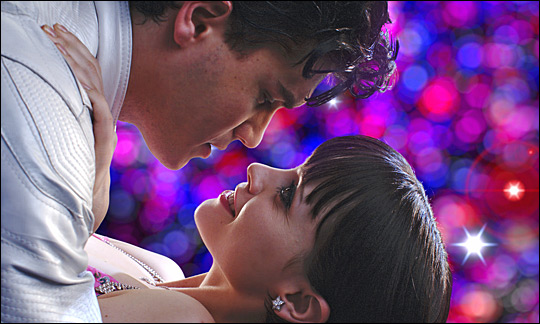 He's the hero: We know because he's got the loyal girlfriend (Christina Ricci).

Speed Racer looks — and sounds — a bit different than he did in his 1960s TV incarnation. Souped up, tuned up and digitally tarted up for its big-screen, big-budget debut, his Mach 5 racer flips and flashes, zooms and careens, sparks and slides sideways, leaps barriers and loops the loop, cheerfully defying every law of physics you've ever heard of.

Gravity? What's that? Centrifugal force? The Second Law of Thermodynamics? (Actually I don't know much about that last one, but I'm confident in saying it doesn't apply here.)

So how can something look so bright, move so fast and be so dull? Oh, right, the Wachowski brothers are involved. They're the guys who made The Matrix, then followed it up with technically sophisticated movies (V for Vendetta, anyone?) notable mostly for being loud, paranoid, simple-minded and dark.

Speed Racer marks a major change in that formula: It's not dark. It's hyperbright, with colors so lurid they'd vibrate even if nothing were in motion. Of course, everything is in motion: People standing still whoosh across the frame. Painted zebras gallop on the racetrack's walls. The trick to zipping safely through all this? As all-time champ Rex Racer explains to his little brother Speed: "Close your eyes and listen."

Now, that's a thought. But if you close your eyes and listen, you'll hear the dialogue, which thuds about as often as the bad guys' cars do. At least I think they're the bad guys' cars, though it's hard to tell at times; for all those potentially seizure-inducing visuals, Speed Racer is never easy to follow, even with a story that can be summed up as "family good, corporate conglomerate bad." (This from Warner Bros., part of the world's biggest media conglomerate.)

To his credit, Speed Racer himself seems unfazed by all the flash and bother. He's played by Emile Hirsch, who has previously looked uncannily like Leonardo DiCaprio but who here looks uncannily like Ray Liotta. (Which isn't really a good trade.) He's surrounded by fine actors whose chief contribution is that they resemble the line drawings they're replacing.

Since actors perform entirely in front of green screens, with everything else painted in digitally, Speed Racer is really just substituting one form of animation for another. No doubt that marks a thrilling advance of some sort, if you're a tech geek — or 9 years old.

If not, here's hoping that — after subjecting yourself to eyeball-lacerating visuals, earsplitting sounds and mind-numbing product placement for what amounts to six back-to-back Speed Racer TV episodes at one sitting — you don't have to drive home right away.